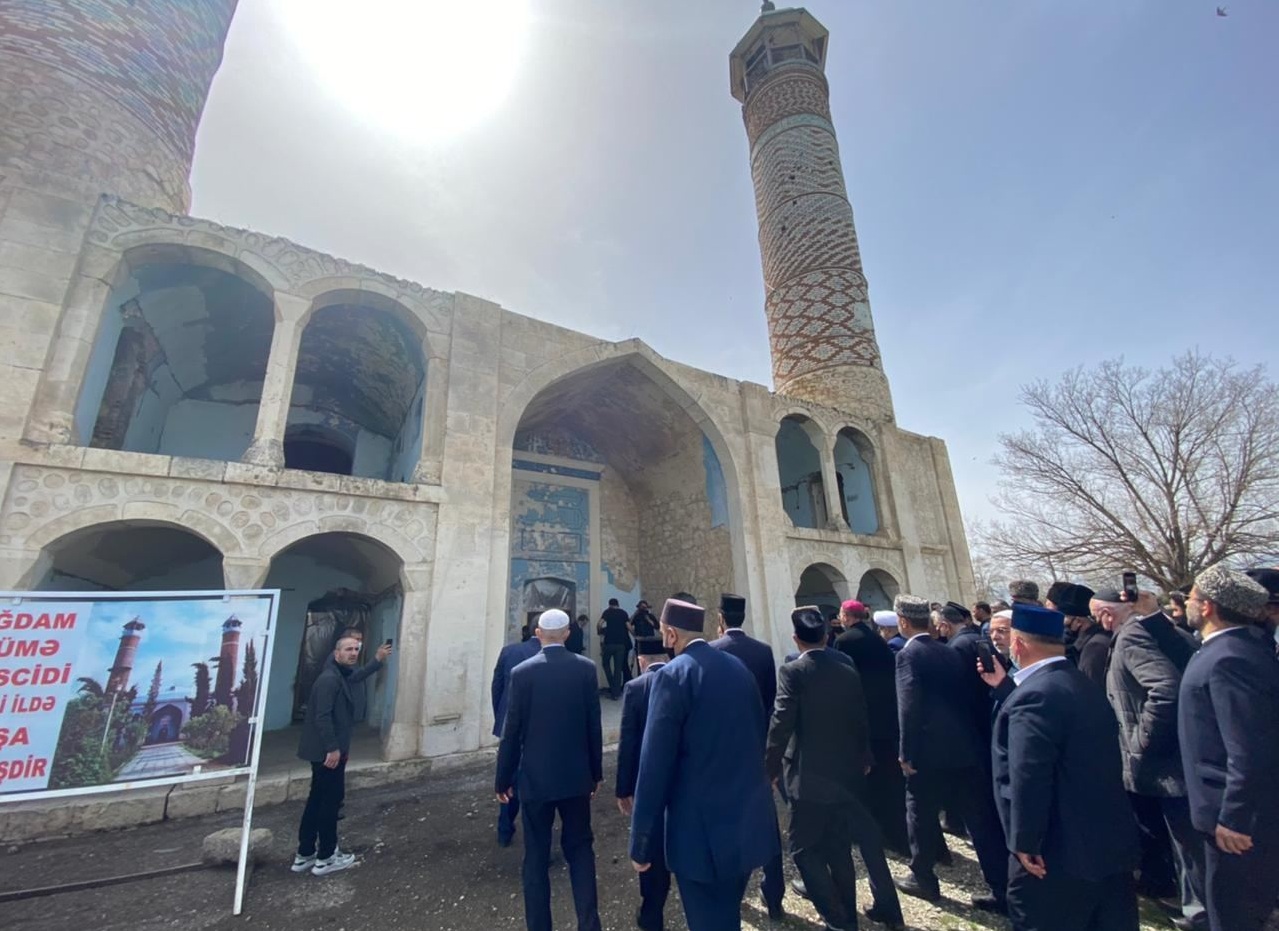 The mosque in Aghdam is the only building that survived the Armenian occupation of the city of Aghdam. Armenia's armed forces captured the city in 1993 during the First Karabakh War and razed it to the ground. Some international journalists refer to Aghdam as the “Hiroshima of the 21st Century” or “Hiroshima of the Caucasus.” / Trend News Agency

A mosque in the liberated Aghdam city in Azerbaijan’s Karabakh region hosted a multi-faith congregation last week that brought together religious leaders of the Muslim, Christian, and Jewish populations of the country.

The joint prayer of the leaders testified to the exemplary religious coexistence, tolerance, inter-religious dialogue, and relationship among the members of all faiths in Azerbaijan, according to the Sheikh of the entire Caucasus, Sheikh-ul-Islam Allahshukur Pashazade.

“We prayed together in the mosque, everyone worshiped. This is not to be found anywhere in the world. This is in the nature of the Azerbaijani people,” Pashazade said, according to a statement issued by the Caucasus Muslim’s Board.

He further added that Azerbaijanis have always treated other nations with respect, including Armenians, who, however, wiped out the religious heritage of Azerbaijan during nearly three decades of occupation of the Karabakh region.

During the years of occupation, the Armenian armed forces completely destroyed 63 out of 67 mosques in the Karabakh region of Azerbaijan.

The mosque in Aghdam is among those partially survived and the only building that survived the Armenian occupation of the city of Aghdam. Armenia's armed forces captured the city in 1993 during the First Karabakh War and razed it to the ground. Some international journalists refer to Aghdam as the “Hiroshima of the 21st Century” or “Hiroshima of the Caucasus.”

“Today, the only structurally whole building [in Aghdam] is the mosque; from the top of the elaborately patterned minarets, the view is of a vast expanse of jagged concrete and houses reduced to shells, all encroached upon by a quarter-century’s growth of vegetation,” Associated Press reported from the Azerbaijani district after its liberation.

Armenia returned Aghdam and the district of the same name under the tripartite ceasefire statement signed on November 10, 2020.

The document ended the war that started on September 27 last year after Armenia’s forces deployed in the occupied Azerbaijani lands shelled military positions and civilian settlements of Azerbaijan. Armenian provocations resulted in counter-attack operations that lasted 44 days during which Azerbaijani forces managed to liberate over 300 occupied settlements, including the cities of Jabrayil, Fuzuli, Zangilan, Gubadli, and Shusha. Under the ceasefire statement, Armenia also returned the occupied Aghdam, Kalbajar, and Lachin districts to Azerbaijan.

The religious heritage of Azerbaijan's Karabakh region is vast. The region is home to the ancient Albanian monasteries – the Khudavang monastery complex in Kalbajar, the Aghoghlan monastery in Lachin, the Govhar Agha mosques in Shusha, and many others.

The most famous of these is the Khudavang temple complex in the Vang village. Khudavang or Dedeveng monastery, located in the Vang village of Kalbajar, was built in the VIII-XIII centuries during the reign of the successors to the ancient Azerbaijani state of Caucasian Albania where Christianity was the major religious belief. The complex is one of the largest and most complete examples of Azerbaijan’s Christian heritage. Numerous construction inscriptions have survived in the Khudavang monastery, including the names such as Arzu, Tursun, Seyti, Hasan, Avag, Shams, Altun, Aghbuh and Garagoz, which prove the Turkic identity of builders.

Meanwhile, promoting a multi-religious coexistence has been a key part of Baku’s strategy to demonstrate moderation, tolerance and diversity in a country of 10 million, where nearly 97 percent are Muslim.

Three percent of Azerbaijan’s population are Christian; less than 0.2 percent are Jews; and 0.2 percent are either unaffiliated with any religion or belong to minority religious groups. Currently, more than 2,000 mosques, 14 churches, and seven synagogues are operating across the Caspian region country.

Azerbaijan’s exemplary religious tolerance made it possible to achieve a peaceful coexistence between the country’s Muslim majority and more than 16,000 Jews and over 250,000 Christians living in the country.

The Christian and Jewish populations of Azerbaijan have actively participated in the restoration of the country's territorial integrity.

David Sadiyev, 26-year-old a graduate of the Jewish high school in Baku, is among those many who took part in the latest outbreak of war in Azerbaijan’s Karabakh region. Albert Agarunov, a Baku-born Jew fought in the First Karabakh War in 1991-1994. He is the National Hero of Azerbaijan and the honorary citizen of Shusha, an Azerbaijani city where he was martyred in 1992.

Denis Pronin, an Orthodox and ethnic Russian, also joined the national army during counter-attack operations in the Karabakh region last year. Denis was shot dead in the battles in the district of Jabrayil on October 6. He was awarded posthumously both the “For the Motherland” and “For the liberation of Jabrayil” medals.