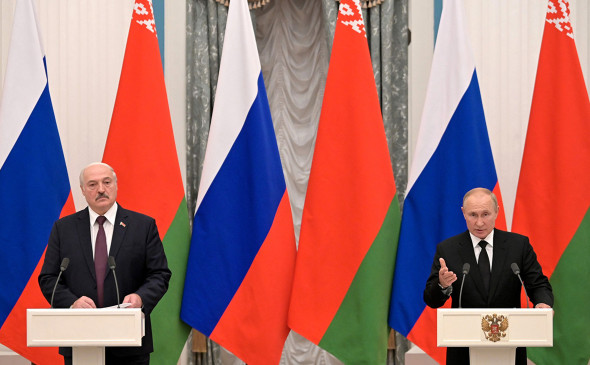 Following the meeting with his Belarusian counterpart Alexander Lukashenko in the Kremlin on Thursday, Russian President Vladimir Putin told reporters that the two countries had agreed on all 28 union programs. / kremlin.ru

After three years of negotiations, Moscow and Minsk made progress toward integrating the two countries’ economies.

Following the meeting with his Belarusian counterpart Alexander Lukashenko in the Kremlin on Thursday, Russian President Vladimir Putin told reporters that the two countries had agreed on all 28 union programs.

“These are 28 so-called “union programmes” that are aimed at the unification of laws in Russia and Belarus in various economic areas, the levelling of conditions for the operation of the two countries’ economic entities, the formation of uniform financial and energy markets, transport infrastructure, the development and implementation of a common industrial and agricultural policy,” President Putin said at a press conference following the talks.

“Today, I would like to say with satisfaction, that all 28 programmes have been agreed upon,” he added.

Belarus — a former Soviet republic — is vital to Russia both economically and strategically. Located between Russia and America’s NATO allies in northeastern Europe, Belarus serves as a buffer against the western military block. Both Russia and Belarus are co-founding members of the supranational Union State, which supposes the gradual establishment of a unified political, economic, military, customs, currency, legal, humanitarian and cultural space.

“We have reached agreements on matters that are highly sensitive for the Belarusian side, which are related to prices for Russian energy. After lengthy discussions, we managed to come up with mutually acceptable approaches to gas supplies. The price for Russian natural gas for Belarus will remain at the current level in 2022,” Vladimir Putin said at the press conference.

At the same time, Moscow and Minsk have agreed to create a unified gas market by December 1, 2023. In addition, the sides will ink an agreement on merging the petroleum and petroleum product markets, as well as an agreement on a single electricity market.

In 2018, Russia’s government suggested resuming negotiations on a package of integration documents after Minsk came up with an initiative to compensate the Belarusian side for the costs from implementing the tax maneuver in the Russian oil sector.

The tax maneuver provides for a gradual reduction of oil export duty from 30 percent in 2019 to zero by 2024 and a simultaneous increase in the mineral extraction tax (MET). As a result, Belarusian refineries did not receive benefits, while the country was forced to buy Russian oil at global prices. According to preliminary estimates, Belarus could lose a total of $10 billion in 2019–2024 in the aftermath of tax maneuver.

The presidents of the two countries were expected to sign union programs in December 2019 on the 20th anniversary of the creation of the Union State. However, the oil crisis between the two countries in late 2019 resulted in a temporary suspension of Russian oil supplies to Belarus due to pricing issues starting from January 1, 2020, and the process of integration has stalled. On January 4, some Russian companies resumed oil supplies to Belarus, but in a small amount, which forced Minsk to search for alternatives. In December 2020, the two countries finally agreed on pricing, but no details have been revealed.

On June 1, 2021, Moscow agreed to compensate Belarus for losses from implementing the tax maneuver.