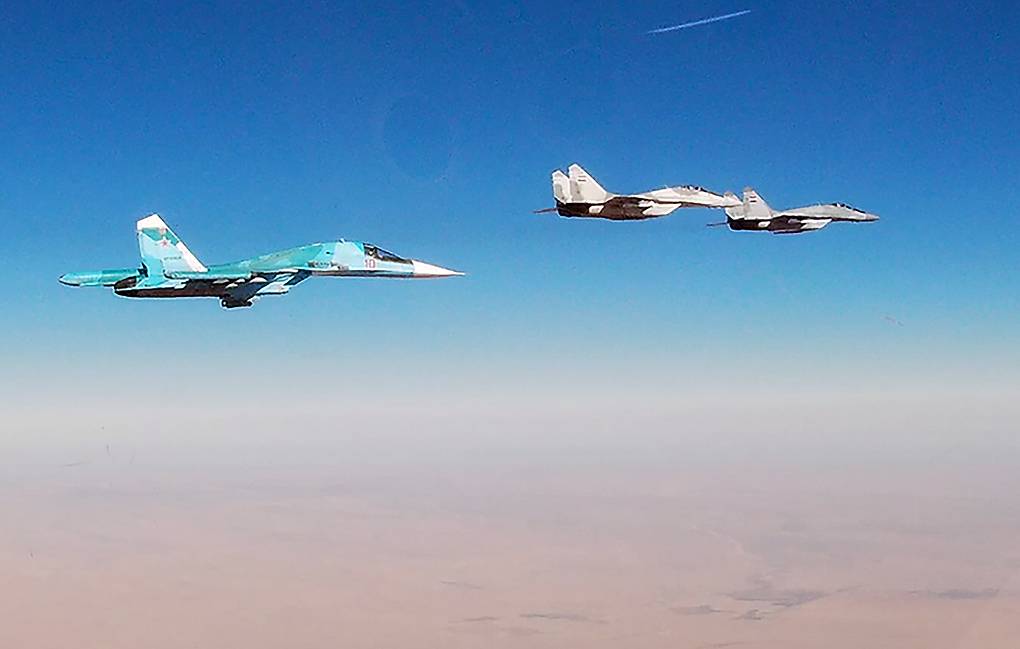 Russia’s military has begun patrolling the boundary that divides zones controlled by the US-led international coalition’s forces and Russian forces in the conflict-hit country amid concerns over the potential ISIS sleeper cells in the area.

Moscow and Damascus are pushing ahead with efforts to contain a conflict in war-torn Syria, which has displaced millions of people in the region.

According to a statement issued by the Russian Defense Ministry, Russian and Syrian military jets conducted on Monday the first joint patrol along the Golan Heights and the Euphrates River.

"The mission’s route ran along the Golan Heights, the southern border, the Euphrates River and over northern Syria," TASS quoted the ministry as saying on Monday.

As part of the first joint air patrol mission of this kind, Moscow sent Su-34 strike aircraft and Su-35 multirole fighters and the A-50 airborne early warning and control (AEW&C) aircraft. The mission also involved Syria’s MiG-23 and MiG-29 planes.

"Russian pilots took off from the Hmeymim Air Base, while Syrians took off from the Seikal and Dumayr airfields outside Damascus," the ministry added. “During the patrol mission, Syrian pilots controlled airspace and provided fighter cover, while Russian crews practiced attacks on ground targets.”

The defense ministry revealed in the statement that the pilots had practiced strikes on air targets and ground targets at a training range in central Syria.

“The two countries’ pilots developed skills for cooperation in various situations. This kind of joint mission will now take place on a regular basis," the ministry said.

Russia’s military has begun patrolling the boundary that divides zones controlled by the US-led international coalition’s forces and Russian forces in the conflict-hit country amid concerns over the potential ISIS sleeper cells in the area.

Russian forces have been present in Syria since 2015 at the request of embattled Syrian President and ally Bashar Al Assad to help Damascus recapture parts of the country from rebels and fight terrorist organizations such as the Islamic State (IS). Due to Russia's military assistance, Assad's regime has won back control over most of the country and strengthened its hold on power.

Meanwhile, Russian air power continues to support Assad’s forces. Yet, Monday’s joint mission along the Golan Heights was seen as a signal to Israel who has captured this strategically important region since the Six-Day War of 1967.

Israeli military officials – concerned over what is deemed to be regular patrol along Syria’s borders, including in the Golan Heights area – are reportedly in talks with Russian army officers over what might be the change in Moscow's policy toward Israel. The highly tense area serves as the armistice line with Israel, which also wage a campaign of airstrikes against targets in Syria, primarily related to suspected Iranian and Hezbollah positions.

The war in Syria first broke out in 2011 when police responded to a series of large-scale protests in several Syrian cities, which called for the ousting of the country's President Bashar Al Assad. Protests and clashes quickly turned into a bloody conflict that has seen the interventions of foreign powers.

According to the London-based Syrian Observatory for Human Rights, an estimated 593,000 people have been killed in what seems like a never-ending conflict in the war-torn Middle Eastern country. More than half of Syria's 22-million population has been displaced either internally and throughout the world. According to BBC, some 6.7 million are internally displaced, many of them living in camps, while another 5.6 million are registered as refugees abroad.