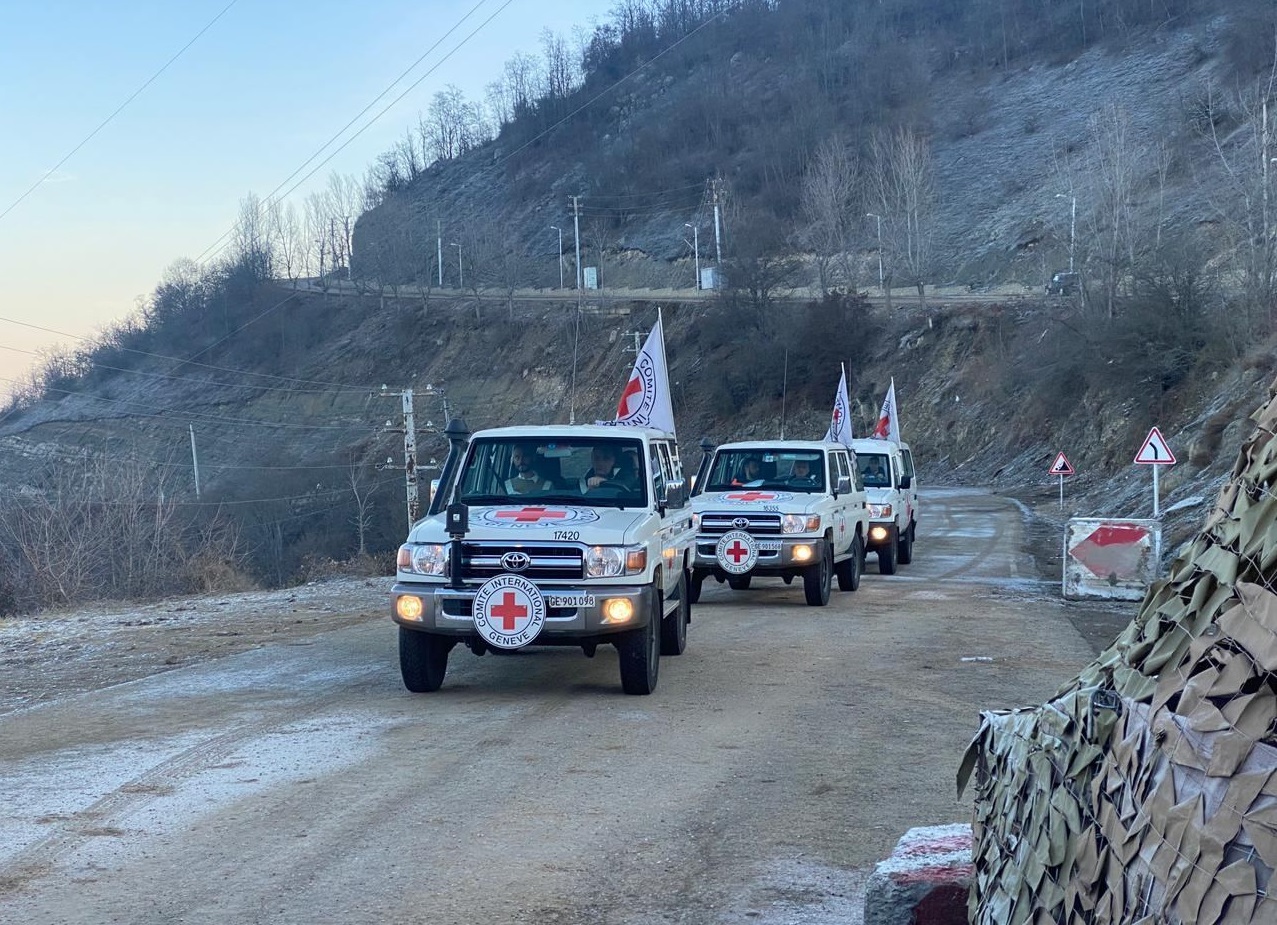 Vehicles of the International Committee of Red Cross on the Lachin road, December 28, 2022 / Trend News Agency

The Center for Analysis of International Relations, also known as Air Center, has revealed the overall number of vehicles that have moved along the Lachin-Khankendi road in both directions since mid-December, 2022.

According to a chart released by the Center, from December 15-31, a total of 205 vehicles belonging to the temporary Russian peacekeeping mission and the International Committee of Red Cross (ICRC) used the highway for moving in both directions. Within the reporting period, the highest traffic on the road was observed on December 28 (41 cars), 29 (31 cars), 27 (19 cars), and 30 (17 cars). The flow of vehicles slowed down on the eve of New Year on December 31 when only two vehicles drove along the highway.

The Air Center also reported that the number of vehicles passing through the Lachin-Khankendi road almost doubled since early January. Thus, the total number of cars that have used the route by January 17 stood at 386. The highway served 42 vehicles of the Russian peacekeeping mission and ICRC on January 11, while 37 cars, 33 cars, and 32 cars moved on the road on January 12, 14-15, and 16, respectively. On January 3, 5, 6, 9, 13, and 17, the traffic included over 20 vehicles on a daily basis.

Meanwhile, on January 17, Russian peacekeepers’ vehicles transported 26 Armenian civilians, including 20 teenagers, to Azerbaijan’s Karabakh region through the Lachin-Khankendi road. The teenagers were said to be en route from a sports competition held in Armenia.

The report by Air Center came amidst the ongoing protest action of the Azerbaijani ecological activists, civil society members, and volunteers on the Lachin-Khankendi road. The protesters demand an end to the illegal exploitation of Azerbaijan’s mineral resources in the Karabakh region. They also demand conduction of ecological monitoring of the deposits by Azerbaijani experts.

Since December 3, 2022, a group of experts from Azerbaijan’s Economy Ministry and Ecology and Natural Resources Ministry, and the State Property Service under the Ministry of Economy and AzerGold Company, held negotiations with the command of the Russian peacekeeping contingent on the illegal exploitation of mineral deposits in some parts of the Azerbaijani territories temporarily under their monitoring. As a result of consecutive meetings on December 3 and 4, the two sides agreed to ecological monitoring by the Azerbaijani experts at the Gizilbulag gold and Demirli copper-molybdenum deposits.

However, on December 10, the visit of the representatives of Azerbaijan to the deposits was derailed in the wake of illegal intervention by ethnic Armenians living in certain parts of Azerbaijan’s Karabakh region. Back then, the Russian peacekeepers did not take preventive measures to facilitate the previously agreed visit of the Azerbaijani experts.

This led civil society members and volunteers to begin protesting along the Lachin-Khankendi road on December 12.

Armenian authorities and media outlets interpreted the peaceful protest as an attempt to block the road that connects Armenia with the ethnic Armenians living in the Karabakh region of Azerbaijan. However, the Azerbaijani government and media have come forth with evidence proving that the Lachin-Khankendi road is used freely by the Russian peacekeepers for humanitarian cargo shipments, as well as for ambulances and civilians, including the family members of the peacekeepers. The activists even provided a hotline number to address the appeals of the Armenian citizens of Azerbaijan.

The armed Russian peacekeeping contingent had earlier temporarily blocked the highway amidst the protests in an attempt to prevent protesters and journalists from gathering there.