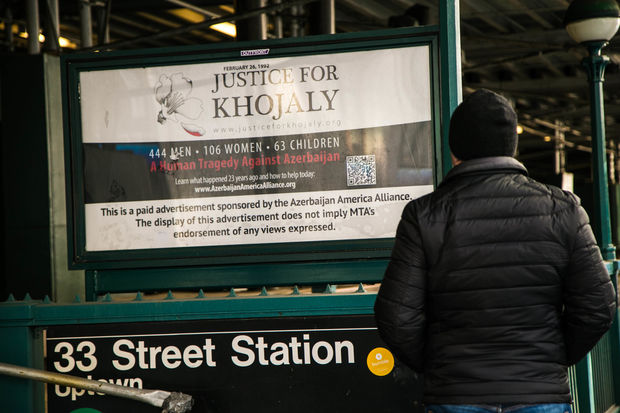 An information board about the Khojaly Genocide of Azerbaijanis installed in one of New York's streets, February 2015 / Courtesy

The governor of the state of Minnesota signed last week a declaration to publicize the Khojaly Genocide of Azerbaijanis in the state on February 26, the day commemorating the victims. Governor Tim Waltz proclaimed the same day as Azerbaijan Day in Minnesota.

The declaration further reads that the Azerbaijani Americans, who call Minnesota home, have played irreplaceable roles in the state’s past by bringing rich diversity and enriched the state by preserving and promoting the Azerbaijani culture, history and heritage in Minnesota.

Head of the Azerbaijani Association in Minnesota, Gunel Rallis, said the declaration’s adoption followed an appeal by the community to the state governor in January of this year. The community’s perseverance has finally paid off despite rejections by the governor’s office, according to Rallis.

“They did not want to touch on international conflicts. I gave accurate and comprehensive information about the genocide and tragedies committed by Armenians,” she said. “I did not accept the rejection because this was the first appeal in Azerbaijan's history in Minnesota. Then, we achieved to sign this statement. It is a great success for the people and the state of Azerbaijan.”

Rallis said information about the Khojaly Genocide of Azerbaijanis will be publicized in Minnesota through the roadside boards installed on the state’s highways starting on February 20.

The mass annihilation of Azerbaijanis in the town of Khojaly in the Nagorno-Karabakh (Daghlig Garabagh) region of Azerbaijan was the deadliest chapter of atrocities committed by Armenia's forces in the early 1990s. Late into the night on February 25, Armenian forces, backed by the Infantry Guard Regiment No. 366 from a collapsed Soviet army, assaulted Khojaly to kill 613 ethnic Azerbaijanis, including 106 women, 63 children, and 70 elderly people, and take 1,275 as hostages. Another 150 Azerbaijani nationals went missing, whose fates remain unknown to this day. Those suffering major injuries or having been maimed totaled 487, including 76 children.

The massacre in Khojaly has been committed as part of broader military aggression launched by Armenia in 1991 to occupy Azerbaijan's Nagorno-Karabakh region, which was partially populated with ethnic Armenians living alongside indigenous Azerbaijanis. The Nagorno-Karabakh region, which is an internationally recognized part of Azerbaijan, was the primary focus of invasion plan developed by Armenia's authorities since the late 1980s.

The full-scale war lasted until a ceasefire deal in 1994. As a result of the bloody war, Armenia occupied 20 percent of Azerbaijan’s internationally recognized territories – the Nagorno-Karabakh region and seven surrounding districts. Over 30,000 ethnic Azerbaijanis were killed and one million were expelled from those lands in a brutal ethnic cleansing policy conducted by Armenia. Although the UN Security Council adopted four resolutions in 1993 demanding the immediate withdrawal of the occupying forces from the Azerbaijani lands and the return of internally displaced Azerbaijanis to their native lands, Armenia failed to comply with all four legally binding documents.

The latest outbreak of war in the region started on September 27 last year after Armenia’s forces deployed in the occupied Azerbaijani lands shelled military positions and civilian settlements of Azerbaijan. The attacks triggered the Azerbaijani forces to take immediate counter-offensive measures for pushing back the assault. The 44-day war ended in a tripartite ceasefire statement signed by Armenia, Azerbaijan and Russia on November 9. By this time, Azerbaijani forces liberated more than 300 settlements, including five cities from nearly 30-year-long illegal Armenian occupation. Armenia returned the occupied Aghdam, Kalbajar, and Lachin districts to Azerbaijan by December 1 as part of the obligations it took under the ceasefire deal.

Sixteen countries from around the world including the Czech Republic, Romania, Slovenia, Bosnia and Herzegovina, Mexico, Colombia, Peru, Panama, Pakistan, Jordan, Indonesia, the Scottish parliament in the UK, the 57-country Organization of Islamic Cooperation, as well as 24 state governments in the United States, have officially recognized the events in Khojaly as genocide of Azerbaijanis. The House of Representatives of Minnesota has earlier in 2016 adopted a resolution to recognize February 26 as the 24th anniversary of the Khojaly massacre. TV channels in California have broadcasted a film about the Khojaly Genocide – “Running from the Darkness” on the eve of the genocide’s commemoration last year.