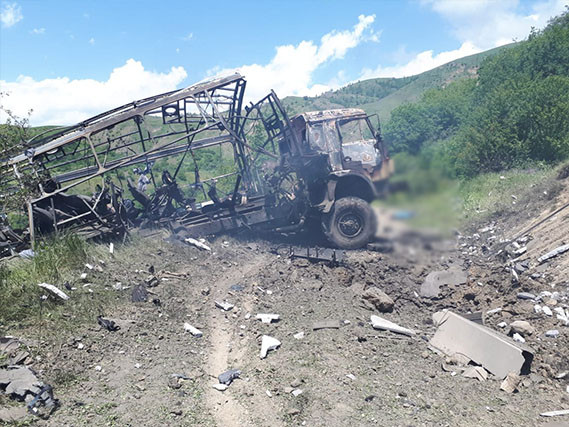 An anti-tank mine explosion near the Susuzlug village of Kalbajar destroyed a bus carrying a group of media representatives and district authorities. / Azerbaijan Television

Two Azerbaijani journalists and an official from a district executive power died on Friday in a mine accident in Azerbaijan’s liberated Kalbajar district.

An anti-tank mine explosion near the Susuzlug village of Kalbajar destroyed a bus carrying a group of media representatives and district authorities. As a result, a camera operator of the state-owned Azerbaijan Television, a reporter of the state-run Azertag News Agency, and the deputy representative of the Kalbajar district governor for the Susuzlug village died on the spot.

Shortly after the accident, Azerbaijan’s foreign minister Jeyhun Bayramov urged once again Armenia to hand over maps of the areas contaminated by mines.

“Deeply saddened to learn that 3 Azerbaijani civilians, including 2 journalists have been killed in a landmine blast in #Kalbajar district of #Azerbaijan,” Bayramov wrote in Twitter.

“We call on #Armenia to hand over minefield maps. Every day they continue to refuse this request, more lives are endangered!” he added.

Azerbaijan’s lands have been mined heavily during their nearly 30-year-long occupation by Armenia since the early 1990s. Armenia kicked off full-blown military aggression against Azerbaijan following the Soviet Union’s dissolution in 1991. The bloody war until a ceasefire in 1994 saw Armenia occupying 20 percent of Azerbaijan’s internationally recognized territories. Over 30,000 Azerbaijanis were killed, and one million were expelled from those lands in a brutal ethnic cleansing policy conducted by Armenia.

As part of 44-day-long counter-attack operations that were triggered by Armenia's provocations last year, Azerbaijani forces managed to liberate over 300 occupied settlements, including the cities of Jabrayil, Fuzuli, Zangilan, Gubadli, and Shusha. The war ended in a tripartite ceasefire statement signed by Armenia, Azerbaijan, and Russia on November 10. Armenia also returned the occupied Aghdam, Kalbajar, and Lachin districts to Azerbaijan as part of the agreement.

Shortly after the war, Azerbaijani authorities rolled out full-scale mine clearance operations in the liberated Karabakh region. But minefields continue posing threats to human lives.

According to the latest data, 27 citizens of the country, including 20 civilians, have been killed and around 100, including 29 civilians, wounded by mines in the liberated territories since the ceasefire came into force on November 10, 2020.

The mine clearance activities in the liberated territories face major difficulties due to Armenia’s refusal to submit the maps of areas contaminated by mines. Azerbaijani authorities have repeatedly called on the Armenian side to provide these maps to prevent humanitarian and environmental disasters. The Armenian officials, however, still refute the calls.

During seven months since the start of the demining operations in the liberated territories, specialists of the Azerbaijan National Agency for Mine Action (ANAMA) neutralized and defused 3,643 anti-tank mines, 7,449 anti-personnel mines, and 9,033 unexploded ammunitions.

Officials at ANAMA say the neutralization of unexploded ammunition, warheads, and missiles in the combat zones could take 5-6 years, while it is about 10-13 years for the mined areas.

The Azerbaijani military has recently detained members of the Armenian intelligence diversion groups who crossed the Armenia-Azerbaijan border in an attempt to infiltrate Azerbaijan’s district of Kalbajar. Two groups consisting of 9 and 15 servicemen were trying to plant mines on the routes and passages, which is used to supply the Azerbaijani army’s posts.

Igor Korotchenko, editor-in-chief of the National Defense magazine, director of the Center for Analysis of the World Arms Trade, says the Armenian sabotage groups may be behind the Friday explosion.

“We are waiting for a reaction from international journalistic unions to the tragedy. The general demand is to put political pressure on Armenia to force the transfer of maps of minefields,” Korotchenko wrote on his Facebook page.