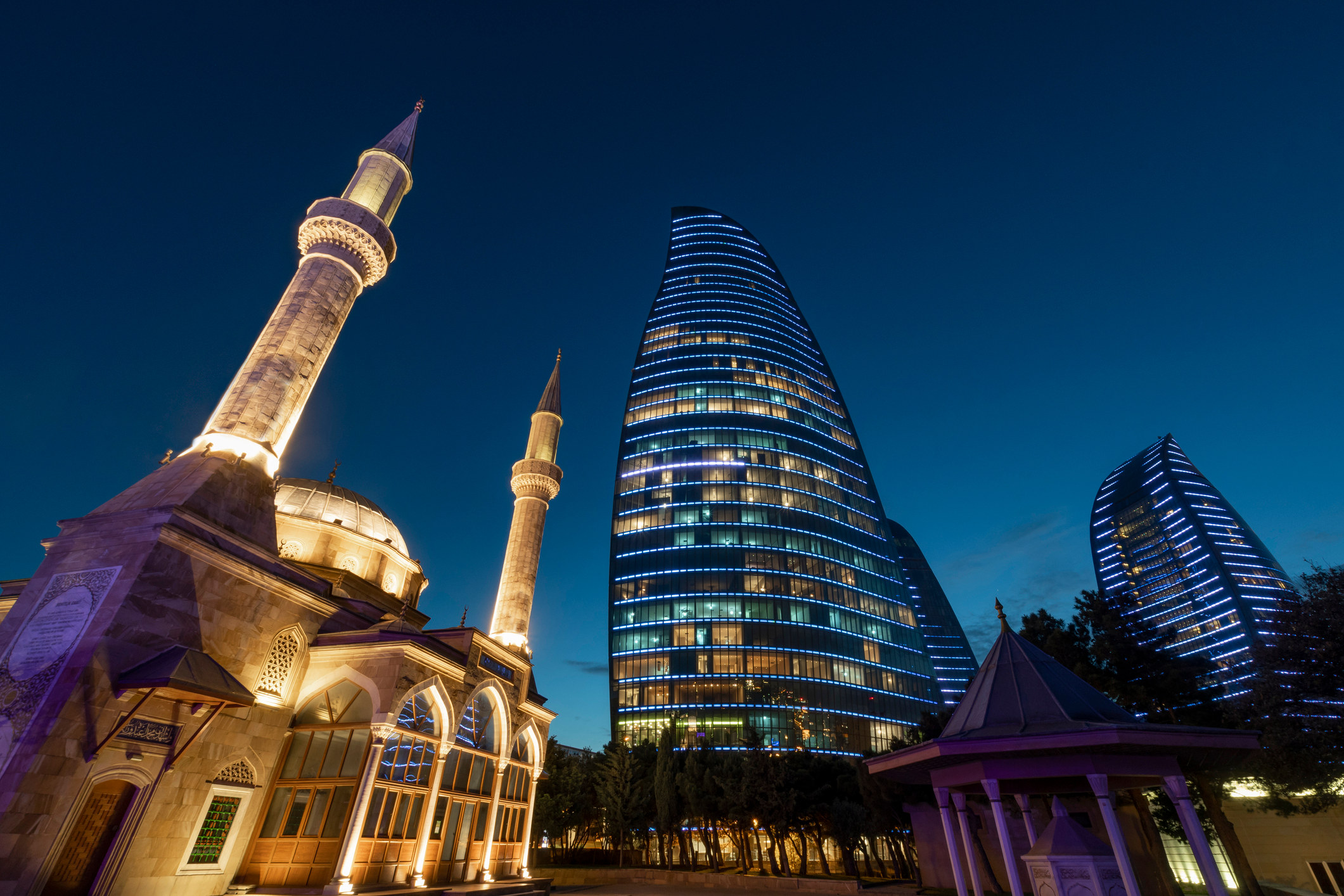 One of Baku's dozens of mosques at the Highland Park, next to the iconic Flame Towers skyscraper trio

Millions living in the Caspian region are celebrating one of the holiest days in the Islamic calendar, namely Eid al-Adha – one of two Islamic holidays celebrated by Muslims worldwide.

Eid al-Adha, known also as the Feast of Sacrifice, is centered on the story in the Quran about Allah testing the loyalty of the prophet Ibrahim by commanding him in a dream to sacrifice his only son, Ismail, as a sign of faith. Just as Ibrahim was about to sacrifice his son, Allah stopped him from doing so, and instead allowed him to make a sacrifice using a lamb instead.

With nearly 130 million Muslims in the five Caspian littoral states – Azerbaijan, Iran, Kazakhstan, Russia and Turkmenistan – Eid is a big deal. But how it is celebrated – even when it is celebrated – varies from one country to the next, depending on the citing of the new moon, and cultural differences between the populations in each country.

In Azerbaijan, the holiday is celebrated from August 12 to 13, in accordance with a fatva, or edict, issued by the Caucasian Muslims Office, the main Islamic religious institute in the country. Although Azerbaijan is constitutionally secular, it is home to nearly 10 million people, 97 percent who are Muslim. During Eid, mosques see more visitors than normal, who are there to pray, show loyalty to the faith, and seeking blessings and forgiveness from Allah for their sins. Families and friends typically gather during the holiday and exchange gifts over lavish meals of traditional Azerbaijani and Middle Eastern foods.

Celebration of Eid al-Adha is traditionally centered on slaughtering an animal that represents the animal Ibrahim sacrificed in place of his son, such as a goat or a sheep. The meat from the sacrificed animal is traditionally divided into three parts and shared with family and relatives, neighbors and the needy. In Azerbaijan, however, the meat is divided into seven portions and is sent to seven different houses, including the relatives, neighbors and needy known by the family.

Muslims throughout the world celebrate Eid al-Adha on the last day of the Hajj, the religious pilgrimage to the holy city of Mecca in Saudi Arabia, and adherents of Islam residing in Kazakhstan are no exception.

This year, more than 3,000 pilgrims from Kazakhstan headed to Saudi Arabia, according to data provided by the country’ Civil Aviation Committee. Following the tenets of Islam, visitors must visit Masjid al-Haram that surrounds the Kaaba shrine – the most sacred site in Islam – and circulate around it seven times in a counterclockwise direction. In addition, pilgrims are to visit Mount Arafat, where they must stand before sunset. The list of sacred sites also includes Muzdalifah and Mina – the open areas located near Mecca.

Aniyash Baisalbekova, age 75, was given a title of Hajji when she first visited Mecca in 2012.

“Hajj is not an easy feat. If this came easy, then, probably, everyone would become pilgrims. Firstly, it’s very hot there and sometimes the temperature can reach up to 50 degrees. Secondly, there are a huge number of people,” she said in a recent interview with Sputnik.

Meanwhile, those who cannot visit Saudi Arabia this Eid season are celebrated the sacred holiday at home. This year the Feast of Sacrifice in Kazakhstan runs from August 11 to 13, and features public festivities, charity fairs and musical concerts. Kazakhstanis visit each other and exchange gifts and treats, similar to what takes place in other Muslim countries.

Muslims in Turkmenistan, which account for 89 percent of the country’s population, are celebrating Eid at the same time as Kazakhstanis. Traditional entertainment during Eid consists of riding on a swing, which according to a nationwide belief helps getting rid of sins.

On August 2, President Gurbanguly Berdimuhamedow signed a decree to provide 160 Turkmenistani pilgrims with an opportunity to visit Mecca and Medina, a second holy site in Saudi Arabia, for Hajj. Turkmen Airlines is operating a special flight to Saudi Arabia just for pilgrims at the company’s expense.

As the Caspian’s only officially Muslim country, Iran marks Eid al-Adha with prayers called the Namaz Eid at local mosques and on open grounds. In keeping with the holiday’s tradition worldwide, cattle, camels, sheep and other livestock are slaughtered and the meat is distributed to family, friends and the poor. Portions are split equally between the different groups.

Eid is a national holiday in Iran and a time when people ask for forgiveness from others if they did something offensive or wrong.

In Russia, Muslims gathered in mosques and specially prepared areas throughout the country. This year, Eid al-Adha in Russia runs from August 11 to 14 pursuant to the testimony of Muslim theologians from the Spiritual Administration of Muslims of Russia, a Moscow-based centralized religious organization.

Russia's Grand Mufti Rawil Gaynetdin led a holiday prayer known as namaz, and gave a sermon to thousands of Muslim worshippers at the Moscow Cathedral Mosque - the country's largest and arguably most impressive mosque.

Although Russia is the only non-Muslim majority country in the Caspian region, the Muslim population there is said to be anywhere between 14 million and 20 million – roughly 10 percent of the total population of over 142 million.