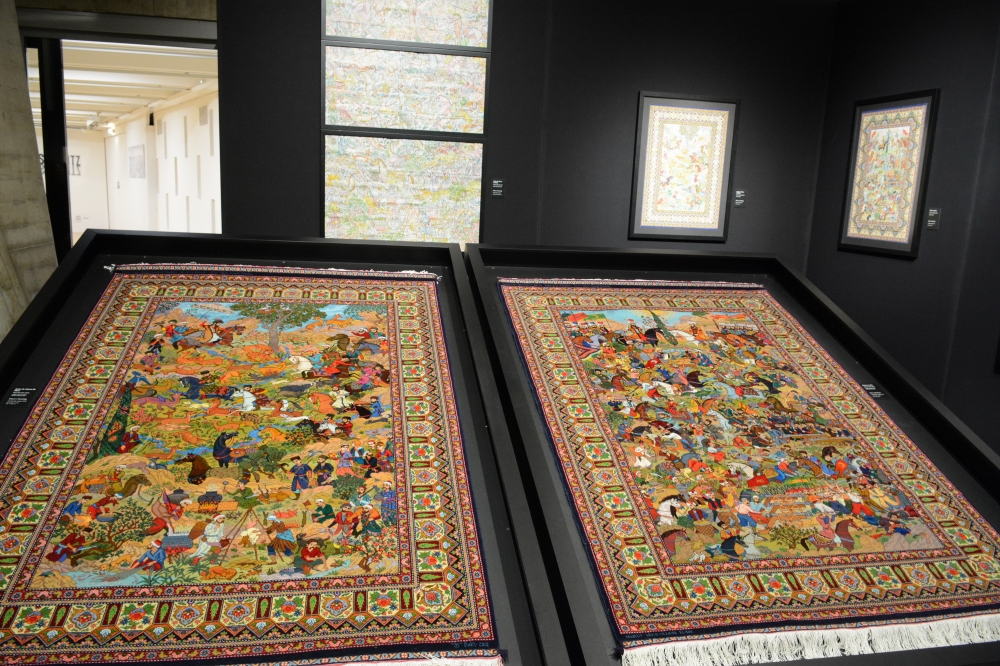 Flamboyant French capital city of Paris came under the spotlight this week with an exhibition dedicated to Azerbaijani carpets that opened its doors on Thursday at the UNESCO headquarters located in the city.

The exhibition, launched by the Heydar Aliyev Foundation, a non-governmental and non-commercial foundation in Azerbaijan, as well as by the country’s Permanent Delegation to UNESCO and Embassy to France, is dubbed “New discoveries: New motifs in Azerbaijani carpets” and features the millennia-old carpet-weaving art of the Caspian nation.

The list of exhibits includes the carpet samples belonging to the Sheki city of Azerbaijan, the historical center and Khan’s Palace of which were inscribed in the UNESCO World Heritage List last year.

Works of 30 local carpet weavers, as well as the French national Philippe Juge are being displayed at the weeklong presentation, which will wrap up on February 4. The primary motifs on the carpets have their roots to the enigmatic ornaments and frescoes found in the Sheki Khan’s Palace, an exuberant royal palace that was built in the 18th century.

Philippe Juge has had an inspirational success story following the exhibition’s inaugural edition that took place in Cannes last year, where 13 different carpets belonging to the Sheki group of the national Azerbaijani carpets were demonstrated. After attending the show, he traveled to Azerbaijan and learned the art of Azerbaijani carpet weaving from local masters. He has subsequently installed a loom in his house in Cannes and has been weaving carpets for almost two years.

UNESCO has inscribed the Azerbaijani art of carpet-making into the Representative List of UNESCO’s Intangible Cultural Heritage of the World in 2010.

Azerbaijan is considered one of the world’s most ancient centers of the carpet weaving industry. Archeological excavations in the territory of the country have proven the first information about carpet weaving date as far as back to the 4th and 3rd millennium BC, namely the Bronze Age. Antique historians, including Herodotus, Claudius Elian, Xenophon and others mentioned in their books the existence of well-developed carpet craftsmanship in Azerbaijan. In modern-day Azerbaijan carpet weaving is the most widespread, the nationalized and traditional folk art.

Azerbaijani carpets are identified as pile and pileless, according to their raw material and weaving techniques. Silk and wool have traditionally been the most preferred materials in this industry.

The pileless carpets come from the very early period of weaving art’s creation and development. As the most known and widespread types of Azerbaijani carpets, they are classified based on the weaving style, composite structure, ornament richness, and coloring. There are eight basic types of traditional Azerbaijani carpets: palas, dzhejim, lady, kilim, shedde, verni, zili, and sumakh.

Seven specific historical carpet weaving schools – Guba, Shirvan, Baku-Absheron, Ganja, Gazakh, Karabakh, and Tabriz — have been traditionally dealing with carpet weaving. Each school has its own specific style and technique of weaving a carpet. Ornaments of carpets in Guba-Shirvan schools contain stylized vegetative, sometimes zoomorphic motives consisting of geometrical patterns, while Baku-Absheron carpets are unique due to their greater softness, the intensity of color, originality of art elements and subtlety of patterns. Deep blue and sometimes red and yellow contain the major color palette of the largest middle segment of Baku-Absheron carpets.

Masters of the Ganja-Gazakh schools are famous for weaving carpets from silk and wool with a rich color palette created uniquely with only a few colors. Karabakh carpets have the richest color palette amongst all, reflecting the most subtle color shades of the local nature. The main background intermediate spaces of Karabakh carpets are dyed in red which is extracted from various plants, as well as insects such as cochineal.

The most ancient Azerbaijani carpets have been woven in the city of Tabriz, the capital city of East Azerbaijan province of Iran. Piled and pileless carpets of the Tabriz school are distinguished thanks to decoration techniques, the harmony of colors, and a variety of ornaments.

The world’s oldest and largest carpet, dubbed Ardabil or Sheikh Safi, is being kept at the Victoria and Albert Museum in London. The carpet contains 35 million knots and has been woven in the 16th century in Tabriz city. The other version of Sheikh Safi carpet — a modern one that was produced in 1940 — is exhibited at the Museum of Art of the District of Los Angeles.