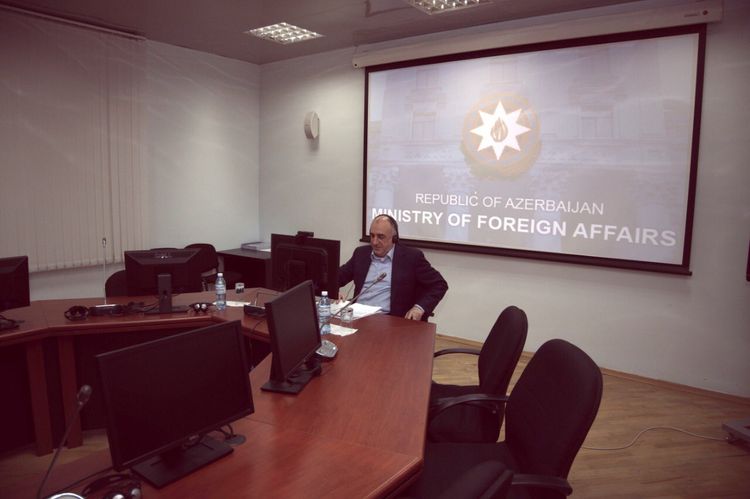 Azerbaijan's Foreign Minister Elmar Mammadyarov holds a video conference with his Armenian counterpart and diplomats of the OSCE Minsk Group at the ministry's building in Baku, April 21, 2020 / Twitter page of the ministry's spokesperson Leyla Abdullayeva

Despite the Covid-19 pandemic, discussions between Baku and Yerevan on the ongoing Nagorno-Karabakh conflict have continued; however, a video conference joined by the two countries' foreign ministers earlier this week failed to produce any settlement.

The ministry explained that regardless of how the virus impacts regional developments, both ministers agreed that the two countries should resume political negotiations as soon as possible with the aim of reaching a solution to the conflict pursuant to the joint statement issued in Geneva on 30 January 2020.

“Because of the extraordinary situation resulting from the Covid-19 outbreak, the implementation of previously agreed humanitarian measures, as well as the Ministerial meetings and the visits of the Co-Chairs to the region, have been postponed,” the ministry said, adding that the two sides should not, however, stop the necessary work to prepare these activities.

The separate and joint meetings of the Co-Chairs of the OSCE Minsk Group - Igor Popov of the Russian Federation, Stéphane Visconti of France, and Andrew Schofer of the US with Mammadyarov and Mnatsakanyan in the Swiss city of Geneva on 28-30 January led to a move by both countries to back the joint statement.

Three days of intensive discussions focused on several issues, namely "the implementation of agreements and proposals discussed in 2019 and possible next steps to prepare the populations for peace; principles and elements forming the basis of a future settlement; and timing and agenda for advancing the settlement process."

Officials in Baku believe that the importance of observing the ceasefire strictly and refraining from provocative actions in the current environment are key to facilitating the settlement process.

“Azerbaijan is insisting that substantive talks must be intensified as there is no way to move out of the situation which region is facing now. The OSCE Minsk Group Co-Chairs are considering the opportunities to move forward the peace process without military consequences,” read the statement issued by the Azerbaijani Foreign Ministry.

The fall of the Soviet Union in 1991 paved the way for Armenia to launch a full-fledged military campaign against its eastern neighbor Azerbaijan. Yerevan has made illegal claims to the Nagorno-Karabakh region of Azerbaijan where the partial Armenian population lived side by side indigenous Azerbaijanis who were completely expelled from their historical homeland.

The war between the two countries began in the late 1991 with the occupation of the Azerbaijani city of Khankendi by Armenian forces. Three years into the bloody war, Armenia occupied the entire Nagorno-Karabakh region and seven surrounding districts of Azerbaijan, which comprises 20 percent of the country’s internationally recognized territory. The war has also led to the forcible displacement of one million Azerbaijanis, simultaneously claiming the lives of 30,000.

A ceasefire agreement was signed by Azerbaijan and Armenia in May 1994; however, the 26 years of political talks between the two countries that followed have not yielded tangible results, despite international mediation by the OSCE Minsk Group co-chaired by USA, Russia, and France, and four legally binding resolutions of the UN Security Council calling for the withdrawal of Armenian forces from the occupied lands and return of internally displaced Azerbaijanis to their homes.