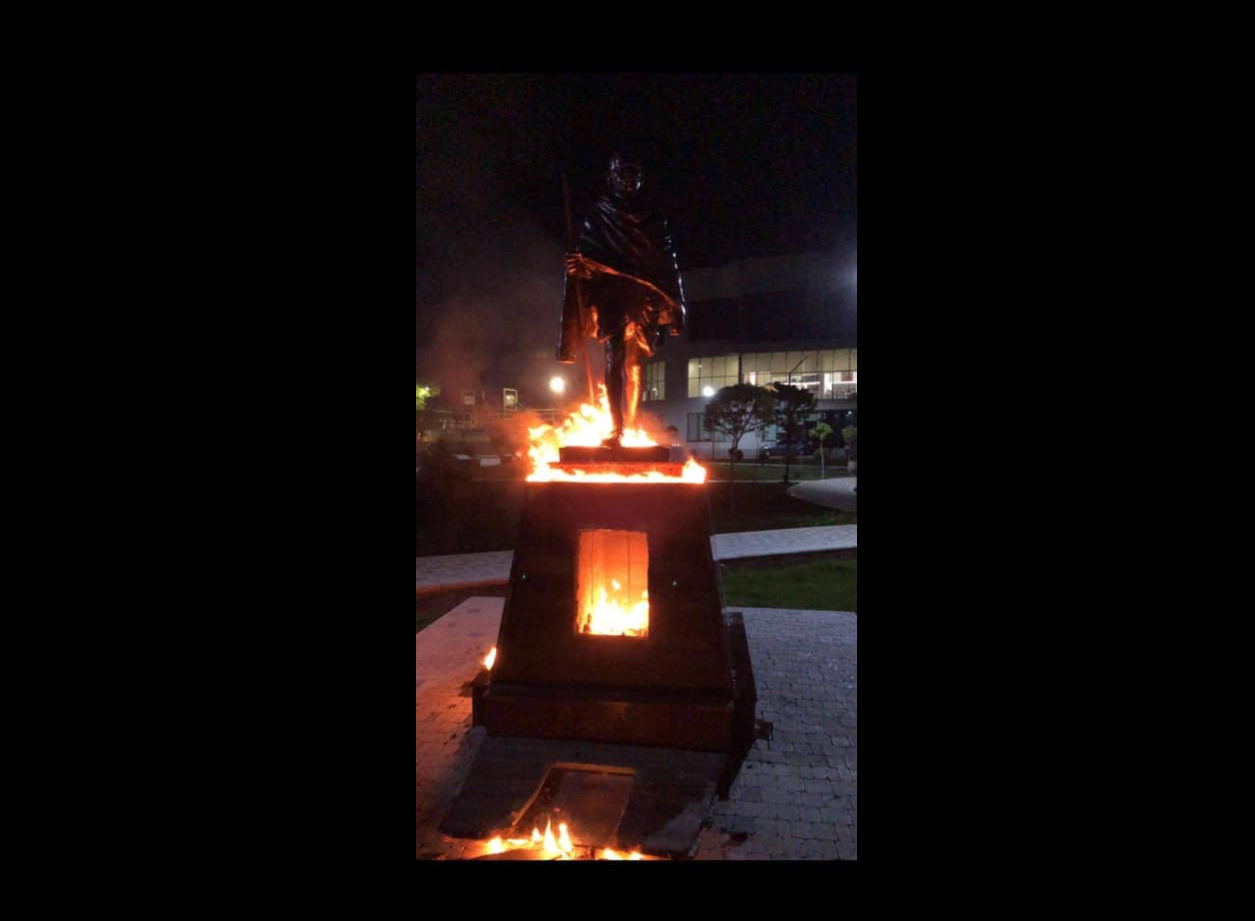 Mahatma Gandhi's statue in Armenia's capital Yerevan was set on fire and vandalized on April 28, 2021. / Courtesy

The monument to the Indian independence leader Mahatma Gandhi in Armenia’s capital city of Yerevan was set on fire and vandalized in a move that is believed aimed at protesting the worldwide known Indian political and public figure’s thoughts about the so-called “Armenian genocide.”

The statue was desecrated at night on April 28. The memorial plaque with the name of Gandhi was demounted from the monument. The public organization, known as “Yerevan Alternative Municipality,” posted photos of the desecrated statue on its Facebook page, stressing that the monument should be demolished.

“Gandhi was a hater of Armenians and was an ally of Ataturk (the founder of the Republic of Turkey). We will fight for this monument to be demolished. He has no place in Yerevan,” the organization wrote in the Facebook post, according to a report by Interfax.

The organization described Gandhi as an anti-Armenian figure and assured the residents of Yerevan that the statue would be removed from the capital city. It has also scheduled an extraordinary session on May 1 to discuss the immediate dismantling of Mahatma Gandhi’s monument. Supporters of the organization called Gandhi “an animal” and those who installed his statue in Yerevan “traitors.” At the same time, the Indian Ambassador to Armenia rejected the Yerevan Alternative Municipality’s invitation to attend the discussions.

Meanwhile, two days before the statue was set on fire, a group of protesters has reportedly thrown eggs at the statue.

Mahatma (Mohandas) Karamchand Gandhi was an Indian lawyer, politician, social activist, and writer who led India’s independence movement against British rule. Gandhi is internationally valued for his achieving political and social progress through non-violent protests. For millions of Indians, Gandhi was the Mahatma (“Great Soul”) and the father of India.

Gandhi’s statue in Yerevan was erected earlier this year upon the decision of the Yerevan city hall and stirred serious protests among Armenians. They opposed the installation of the monument, calling for an investigation into Gandhi’s legacy, who refused to recognize the so-called “Armenian genocide” and had friendly relations with Turkey’s first President Mustafa Kamal Ataturk. For the protesters, Gandhi is a “Turkophile” - a person who has a solid positive predisposition or sympathy toward the government, culture, history, or people of Turkey.

The so-called “Armenian genocide” hysteria and anti-Turkey sentiments in Armenia have been instigated by U.S. President Joe Biden, who used the term “genocide” to designate the alleged events during World War I in the Ottoman Empire in 1915.

Meanwhile, the government of modern-day India does not recognize the alleged events of a century ago as an act of “genocide.” The Indian Embassy to Armenia has used the “Armenian Remembrance Day” phrase in a Twitter post on April 28.

The vandalistic attack on the statue of distinguished Indian politician Mahatma Gandhi is not the first of a kind in Yerevan. Shortly after the war with Azerbaijan, Armenians desecrated a monument dedicated to the victims of the Holocaust. The paint was sprayed all over the Hebrew writings on the “To Live and Not Forget” Holocaust memorial in Armenia’s capital city of Yerevan. The World Jewish Congress described the desecration as a “vile anti-Semitic graffiti.” The reasons for the vandalistic attack have been reportedly linked to Israel’s selling weapons to Azerbaijan and having strategic relations with the Muslim-majority country.