Russian President Vladimir Putin (L) and his French counterpart Emmanuel Macron (R) held a joint press-conference at the Place of Versailles outside Paris on May 29, 2017 / Kremlin.Ru

France’s newly elected French President Emmanuel Macron met with his Russian counterpart Vladimir Putin at the Palace of Versailles on Monday, calling for improved ties, discussing the fight against terrorism, and addressing the situation in eastern Ukraine.

Putin’s visit has been widely viewed as an effort to mend strained relations that developed during France’s presidential elections earlier this month, where Putin openly supported Marcon’s conservative rivals. Macron’s campaign had accused the Russian government of involvement in a series of cyberattacks on its computer systems.

After a two-hour private meeting on Monday, which Macron described as “extremely frank,” the two leaders were keen on rebuilding the bilateral relationship, despite a number of foreign policy differences between Moscow and Paris.

“We have disagreements, but at least we talked about them. I want us to win the fight against terrorists in Syria and build together lasting political stability,” Macron said at a press briefing following his meeting with Putin. “We have laid the ground for that work together today. I believe we’ve had an extremely frank and direct exchange,” the French president added.

Paris and Moscow have been at odds over how to best handle the conflict in Syria. France, along with other western nations, has demanded Syrian President Bashar al-Assad step down and accused his regime of staging a chemical attack in April, which provoked a US military response. Russia supports Assad, and has been backing his regime militarily since September 2015. 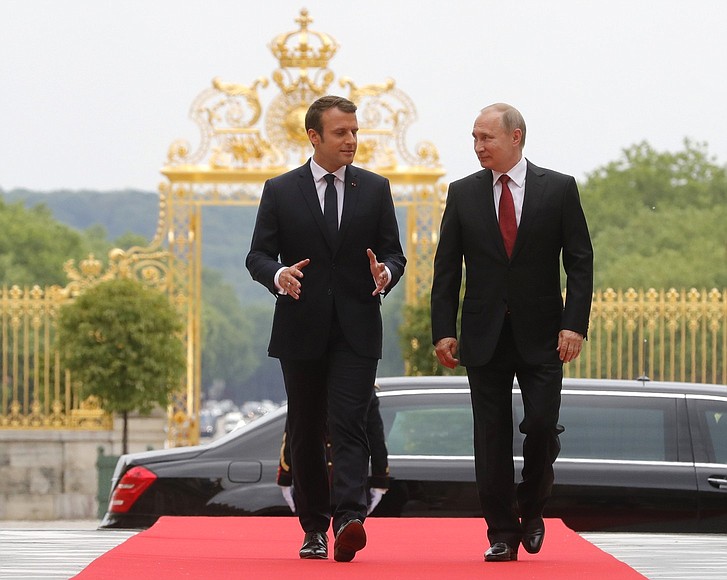 Putin said Moscow is keen on intensifying and improving cooperation with Paris despite any differences.

“What’s important is that during our talks today we sensed that we look at many things in the same way, although there are some differences,” Putin said. “What we have in common gives us the reason to believe that we can not only intensify but significantly improve our cooperation.”

Russia, Turkey and Iran form a troika that have tried to manage the Syrian crisis via regular meetings in Astana, the capital of Kazakhstan, which have included the Syrian government and representatives from the armed opposition. The last meeting, held May 3-4, ended with the signing of a document envisaging the creation of four de-escalation zones where no military activity would be allowed, thus effectively introducing no-fly zones and through which adequate conditions for humanitarian assistance can be created.

On Monday Macron and Putin also discussed the situation in eastern Ukraine. The French leader said he would support new sanctions against Russia if there is any escalation in the conflict there, where he has condemned Russia’s role as an “invasion.”

Moscow intervened militarily in eastern Ukraine in the summer of 2014 for what it claims has been an effort to protect Russian-majority populations living in Donetsk and Luhansk. Western powers have accused Moscow of arming rebel forces in the areas, however, which the Kremlin strictly denies. Unrest in the two regions came in the aftermath of Russia annexing the Crimean peninsula in March of 2014, which in turn resulted in severe economic sanctions imposed by the US and EU on Russia’s state finances, energy and arms sectors, and blacklisting dozens of senior Russian officials.

France has solidly backed Germany in imposing European sanctions on Russia for its annexation of Crimea, and what they claim is covert military intervention in Ukraine. In June 2014 France played host to the first international meeting on the Ukrainian situation, in Normandy, establishing what has been dubbed the “Normandy format.” Operations consist mainly of telephone calls between the Ukrainian, Russian and French presidents, the German chancellor, and their respective ministers of foreign affairs.

Macron said the Normandy format should be upheld to stabilize the situation. For his part, Putin said punitive measures against Russia will not bring peace to Russia’s former Soviet neighbor, and any new sanctions would become a barrier to negotiations meant to regulate what is an uneasy situation in Ukraine’s east.

Denis Denisov, Director of the Institute of Peace Initiatives and Conflict Studies in Moscow, says Macron’s statements at the press conference on Monday were unambiguous, showing that France has no intention of trying to eliminate sanctions on Russia.

“There was an impression that Macron’s main task in his meeting with Putin was to demonstrate that he is able to negotiate on an equal footing,” Denisov told Caspian News, predicting there will likely not be any tangible results coming out of the bilateral meeting in Versailles.