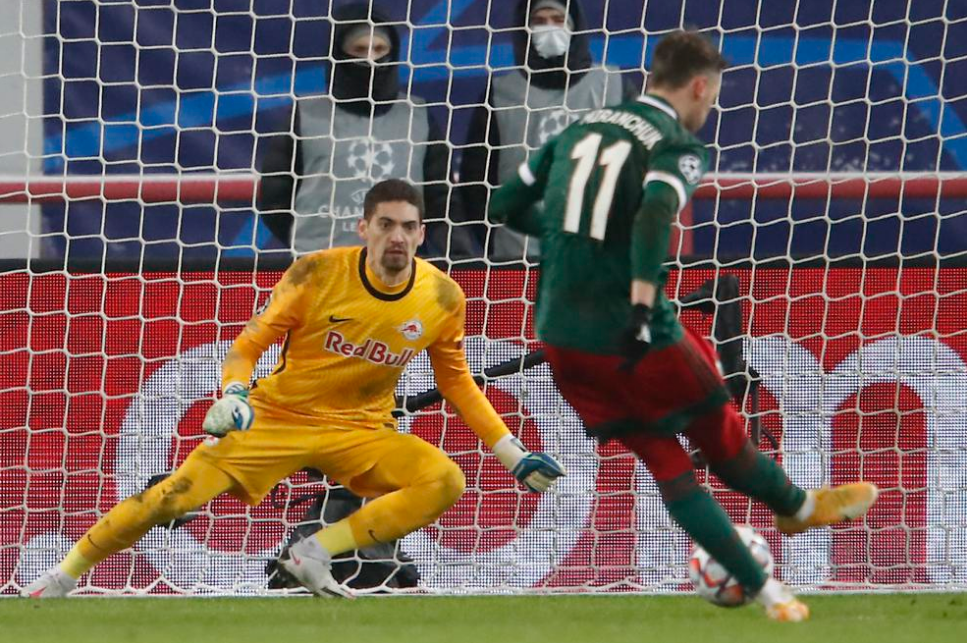 Anton Miranchuk scores the only goal for Lokomotiv Moskva in the match with Salzburg that ended in 1-3 defeat, December 1, 2020 / UEFA Champions League

Three football clubs representing the Caspian Sea region at the European competitions failed to win their last games and are now at the bottom of their respected groups after five games played.

Azerbaijan’s Qarabağ FK and FC Zenit from Russia have blown their shot to make it through the next stage with one game to be played. Both teams managed to gain only one point out of possible 15 following five games. Belgian Club Brugge stunned the Russian champions 3-0 in a home game in UEFA Champions League on December 3. That was the fourth defeat of FC Zenit in Group F, where it competes with German Borussia Dortmund and Italian SS Lazio along with Club Brugge. In the group’s last matchday on December 8, FC Zenit will receive current group leader Borussia Dortmund in St. Petersburg.

“It’s a damaging defeat. There were chances for us to take. Both sides started well and in these segments, it was necessary to score. Then it would be easier,” Zenit midfielder, Andrei Mostovoy said.

The game between the reigning Azerbaijani champions, Qarabağ FK and Israel’s Maccabi Tel-Aviv ended in a 1-1 score, gaining the first point for the Azerbaijani team in group Group I against Spanish Villarreal FC, Turkish Sivasspor and Maccabi Tel-Aviv. Qarabağ FK will play the last group game against the current group leader Spanish Villarreal FC in away.

Despite the dashed hopes of the Qarabağ FK and FC Zenit, Russia’s vice-champions Lokomotiv Moskva keeps the chances to continue in the Europa League. The club is currently at the bottom of the Group A of the UEFA Champions League. Although it has lost 1-3 against Austria’s Salzburg on December 1, the three points gained in five games do not allow the hopes to die given 4 points secured by Salzburg. While Russian football experts and local media identified the last defeat as a “lockout game,” Lokomotiv Moskva manager Marko Nikolić believes they can make a miracle in the last group game on December 10.

“We do still have the chance to finish third and transfer to the UEFA Europa League. If we need to beat Bayern to do that, we will definitely be up for it,” he said referring to the match they will play against reigning Champions League winners Bayern Munchen in Germany.

If Lokomotiv Moskva beats Bayern Munchen and Salzburg loses against or draws with Spanish Atletico Madrid in the group's last game on December 10, the Russian vice-champions will book a ticket for the Europa League as the third-place winners of the group.