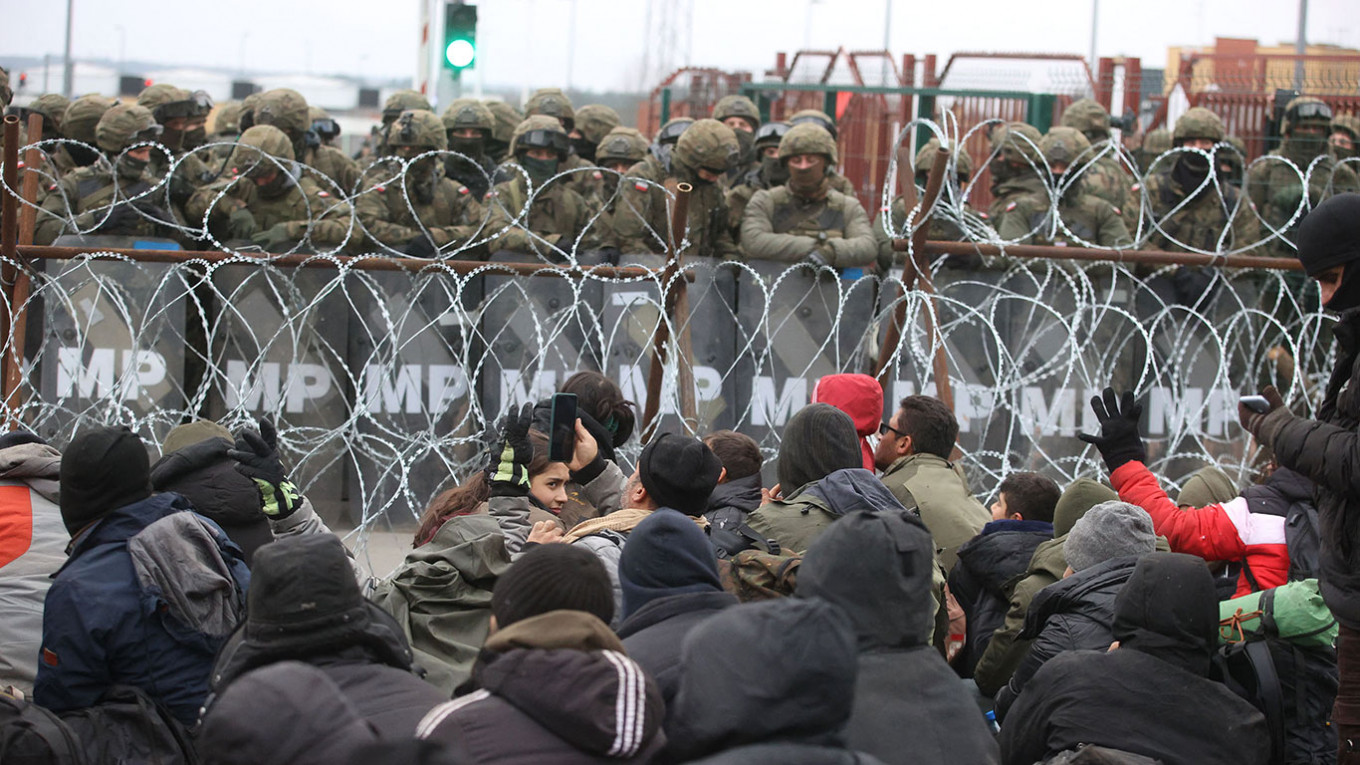 Kremlin spokesman Dmitry Peskov said on Monday that Russia is ready to play the role of mediator in the border migrant crisis between Belarus and the EU.

Responding to journalists' questions in a brief interview on Monday, Peskov recalled that Russian President Vladimir Putin already held phone talks on the matter with Germany’s acting Chancellor Angela Merkel and Belarusian President Alexander Lukashenko, but he repeated his desire that European officials speak directly to their Belarusian counterparts.

"Actually, after this the president expressed hope for direct contacts (between Brussels and Minsk)," RIA Novosti quoted Putin's spokesperson as saying.

Earlier, President Putin said Western countries, rather than Belarus, are ultimately responsible for the migrant crisis on the Belarus-EU borders, pointing to wars in Iraq and Afghanistan. In an interview with Russia 24 news channel last week, the head of the country noted that Iraqi Kurds and Afghans were among the migrants at the Belarusian border.

"Belarus has nothing to do with that," Putin stressed during the interview. "And it is not surprising that they are now going through Belarus because, ... Belarus has visa-free arrangements with the countries of origin."

The migrant crisis unfolded this summer when thousands of people — most of whom are refugees and migrants from the Middle East — were trapped at the center of an intensifying geopolitical dispute on the Belarusian borders with Latvia, Lithuania and Poland. Poland and Lithuania, both members of NATO as well as the European Union, have sent thousands of soldiers into the frontier zone to help border guards and police officers beat back what they describe as "hybrid war".

Western leaders have accused Lukashenko's government of creating the migrant crisis on Europe's frontier in retaliation for EU sanctions. Earlier this year, Belarusian authorities reportedly removed visas for citizens of a number of Middle Eastern states and opened numerous state-controlled tourist enterprises offering an easy and cheap way to get to Belarus. According to EU officials, once the migrants arrive in Belarus, they were escorted to the borders it shares with Poland, Lithuania and Latvia. Migrants were then stranded in the bitter cold, and not allowed to enter the EU or return to Belarus.

Lukashenko's government has, in turn, denied such claims, instead of blaming the West for the crossings and accusing it of poor treatment of migrants.

Meanwhile, Russia, a traditionally close ally to Belarus, continues to defend Minsk's handling of the border crisis while also denying any involvement in it.

Commenting on the statement by US Secretary of State Antony Blinken, who accused Lukashenko of unleashing migrant crisis in order to distract attention "from Russia's activities on the border with Ukraine," Peskov said Blinken "wrongly interpreted" the situation at the Belarus-Poland border.

Peskov went on further to say that Russia has nothing to do with the crisis as well as the Belarusian president.

"Migrants arrive there (in Belarus) using the visa-free regime to further get asylum in Europe," TASS quoted Peskov as saying. "They are not granted it (asylum), they are not allowed to go there (to Europe)," Peskov said.

Putin's spokesperson criticized the West for ignoring the humanitarian side of the issue, turning a blind eye to thousands of refugees who are now trying to survive in the cold weather.

Minsk is feeling pressure under EU's sanctions it has been facing over last year’s opposition protests in Belarus following the re-election of President Lukashenko to his sixth term and, more recently, the forced landing of a Ryanair passenger plane heading from Athens to Vilnius, as well as the detention of two passengers – a Belarusian journalist and his girlfriend – that occurred earlier in May.