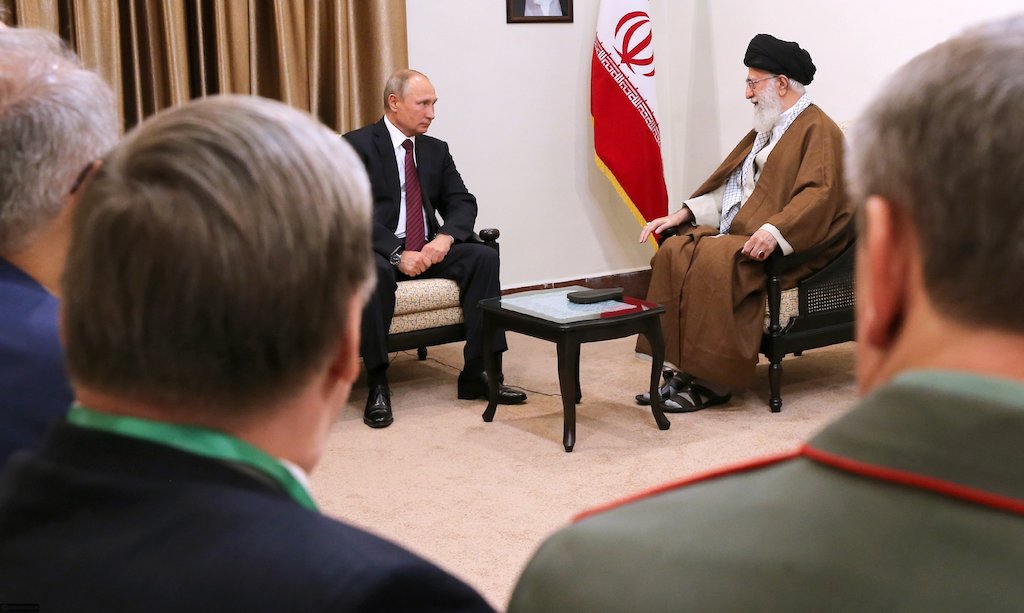 Iran's Supreme Leader Ayatollah Ali Khamenei met with the Russian President Vladimir Putin, who is visiting Tehran to participate in the second trilateral summit of the leaders of Caspian region countries Azerbaijan, Iran and Russia, on November 1. / Khamenei.ir

"By ignoring the negative propaganda of the enemies, seeking to weaken relations between countries, we can nullify U.S. sanctions, using methods such as eliminating the dollar and replacing it with national currencies in transactions between two or more parties; thus, isolate the Americans," the official website of Khamenei quoted him as saying during his meeting with Putin.

Putin was in Tehran on November 1 to participate in the Iran-Russia-Azerbaijan trilateral summit, which focused on regional cooperation in the oil and natural gas sectors. The first tripartite summit took place in Baku in August 2016, in Azerbaijan’s capital where they discussed ways of enhancing cooperation in the areas of commerce, energy, communications, transport and transit. The next summit will be held in Moscow.

Khamenei also discussed with Putin the possibility of the central banks of the two countries to use national currencies for trade, instead of the U.S. dollar, in order to “neutralize” American sanctions.

At the meeting Putin reportedly described Iran as “a strategic partner and a great neighbor,” and referred to sectors such as transportation, technologies, agriculture, as well as energy, all as "suitable areas for developing economic relations.”

Representatives from the Russian oil producer Rosneft inked a road map with the National Iranian Oil Company to implement what it described as “strategic” projects in Iran. The projects worth up to $30 billion, and include developing long-term and mutually beneficial exploration and production operations, field services, applying local technologies to oil exploration and drilling, as well as training personnel.

Khamenei also discussed with Putin the possibility of connecting Iran’s southeastern seaport of Chabahar, which is being developed jointly with India, to the Russian port city of St. Petersburg, according to reporting by Fars news agency.

Moscow and Tehran are gearing up to sign a memorandum of understanding to build a 1,200 km (746 mi) long gas pipeline from Iran to India. Gazprom will be responsible for developing several Iranian natural gas deposits that lie along the route, according to Russian Energy Minister Aleksandr Novak.

“The project will be implemented with the participation of Iranian, Pakistani and Indian firms,” said Novak, according to the Russian online news outlet RT.com.

Russian companies have signed a record number of oil and gas contracts with Iran since the lifting of sanctions on Iran in early 2016, and the volume of trade between the two countries has significantly increased as a result. Trade turnover was $2 billion in 2016, compared to $1.24 billion a year earlier. The two countries are aiming to boost trade to $10 billion within the next two to three years.

Iran and Russia have, time and again, stood on similar sides on a number of issues, yet often fall short of being described as historical allies. From trade and industry, to military affairs – including the international fight to defeat ISIS in the Middle East, where both countries are also lending support to Syrian President Bashar Al Assad against rebel forces – the two countries have often shared common interests.

Russian-Iranian cooperation is also taking the form of a 7,200 km (4,474 mi) International North-South Transport Corridor, an interconnected network of railroads, highways and shipping lanes designed to facilitate the flow of freight through India, Iran, Russia, Azerbaijan, as well as European and Central Asian states.