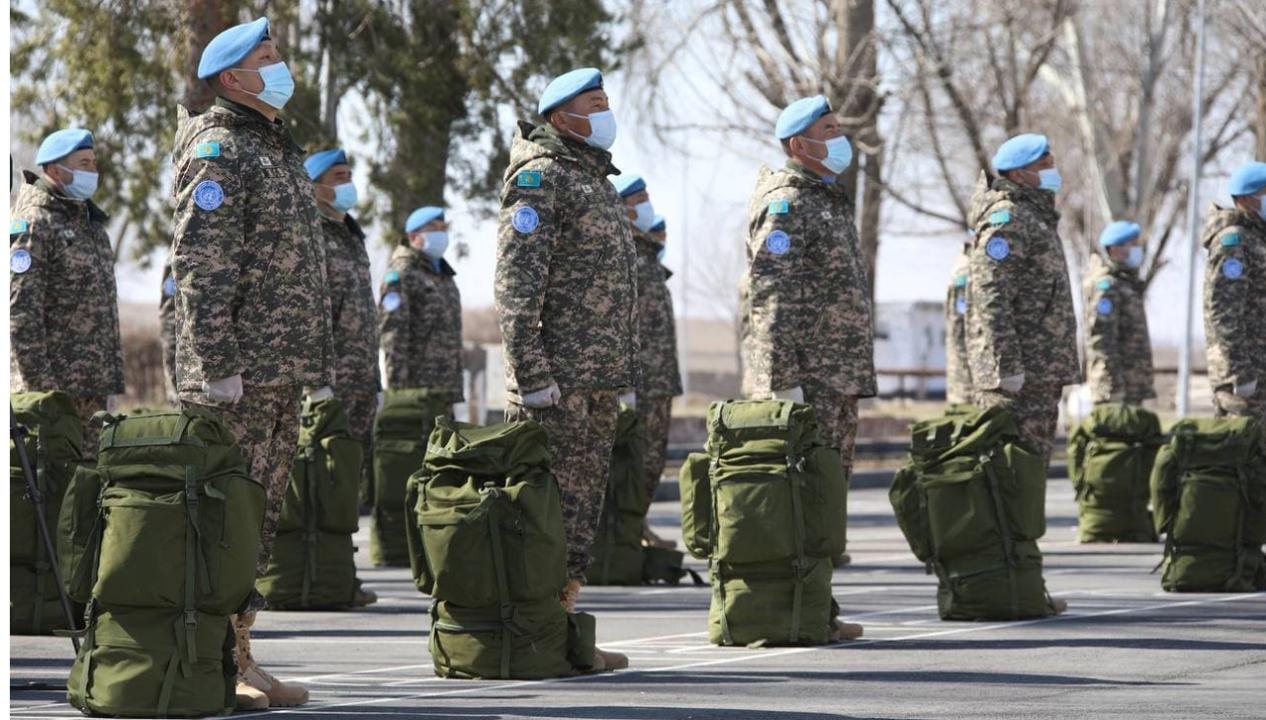 A fifth contingent of peacekeepers from Kazakhstan left for Lebanon to join the United Nations Interim Force (UNIFIL) as part of the next rotation. / Kazakhstan Defense Ministry

Kazakhstan’s Defense Ministry announced on Sunday that a fifth contingent of peacekeepers left for Lebanon to join the United Nations Interim Force (UNIFIL) as part of the next rotation. Kazakhstani blue helmets will be engaged in patrolling the UN-drawn border between Israel and Lebanon alongside an Indian battalion.

The contingent of about 120 servicemen met with Defense Minister Nurlan Yermekbayev before leaving Kazakhstan for the next six months.

“After many months of preparation and careful competitive selection, you are embarking on a long journey to complete a mission that will enrich your experience and strengthen your combat potential,” Yermekbayev said, according to a statement issued by the ministry.

Servicemen from Kazakhstan underwent strict selection and were required to pass a series of psychological medical examinations in order to join the non-combat mission in the Middle East. Also, peacekeepers underwent a month-long mandatory self-isolation and took COVID-19 tests two days before departure.

In Lebanon, the Kazakh servicemen will help to man checkpoints, guard military bases, and patrol the area.

The United Nations Interim Force in Lebanon or UNIFIL was established in 1978 by United Nations Security Council Resolutions 425 and 426. The mandate, however, had to be adjusted twice in 1982 and 2000. UNIFIL was further enhanced after the 2006 Lebanon War – a 34-day military conflict between Lebanon-based Hezbollah paramilitary forces and Israeli Defense Forces.

In accordance with the renewed mandate, UNIFIL, among other things, monitors the cessation of hostilities; accompanies and supports the Lebanese Armed Forces as they deploy throughout the south of Lebanon; and extends its assistance to help ensure humanitarian access to civilian populations and the voluntary and safe return of displaced persons. Together with the Lebanese army, roughly 10,500 military servicemen from 45 countries patrol what is more than a 79-kilometer (49-mile) UN-drawn border between Lebanon and Israel, known as the Blue Line. The contingent from Kazakhstan operates within two bases known as UNP 4-2 and UNP 4-3 and is located not far from Ibl el-Saqi, a town in southern Lebanon.

The first rotational unit of Kazakh troops arrived in Lebanon in October 2018 and left in May of next year. The last, fourth deployment returned from Lebanon last Saturday — right before the fifth contingent left the country.

“Your professionalism is highly appreciated by the leadership of the United Nations Interim Force in Lebanon,” said Gen. Kanysh Abubakirov, commander of Kazakhstan’s Air Assault Forces, who welcomed the peacekeepers in the Almaty Airport last week.

“The participation of Kazakh peacekeepers in the mission is of great importance for strengthening the credibility of our country in the global community, and you made a huge contribution to this,” he added.

Kazakhstan has steadily played the role of peacekeeper and peace broker since its independence in 1991, but for Kazakhstanis, the UNIFIL mission is the first major peacekeeping activity led by the UN and the second major mission the military has undertaken since the NATO-led operation in Iraq in the early 2000s.

Meanwhile, Kazakhstan can now itself train military personnel to participate in peacekeeping missions.

In 2019 the United Nations certified military courses conducted by the KAZCENT — the Training Centre of the Army Academy of Kazakhstan accredited by NATO as a Partnership Training and Education Centre in December 2010. Officials in KAZCENT believe conducting certified UN courses will allow involving representatives from the entire international community.

“The whole range of activities carried out by Kazakhstan will serve as a guarantor of firm intentions in strengthening regional and international security,” reads a statement issued by the center.