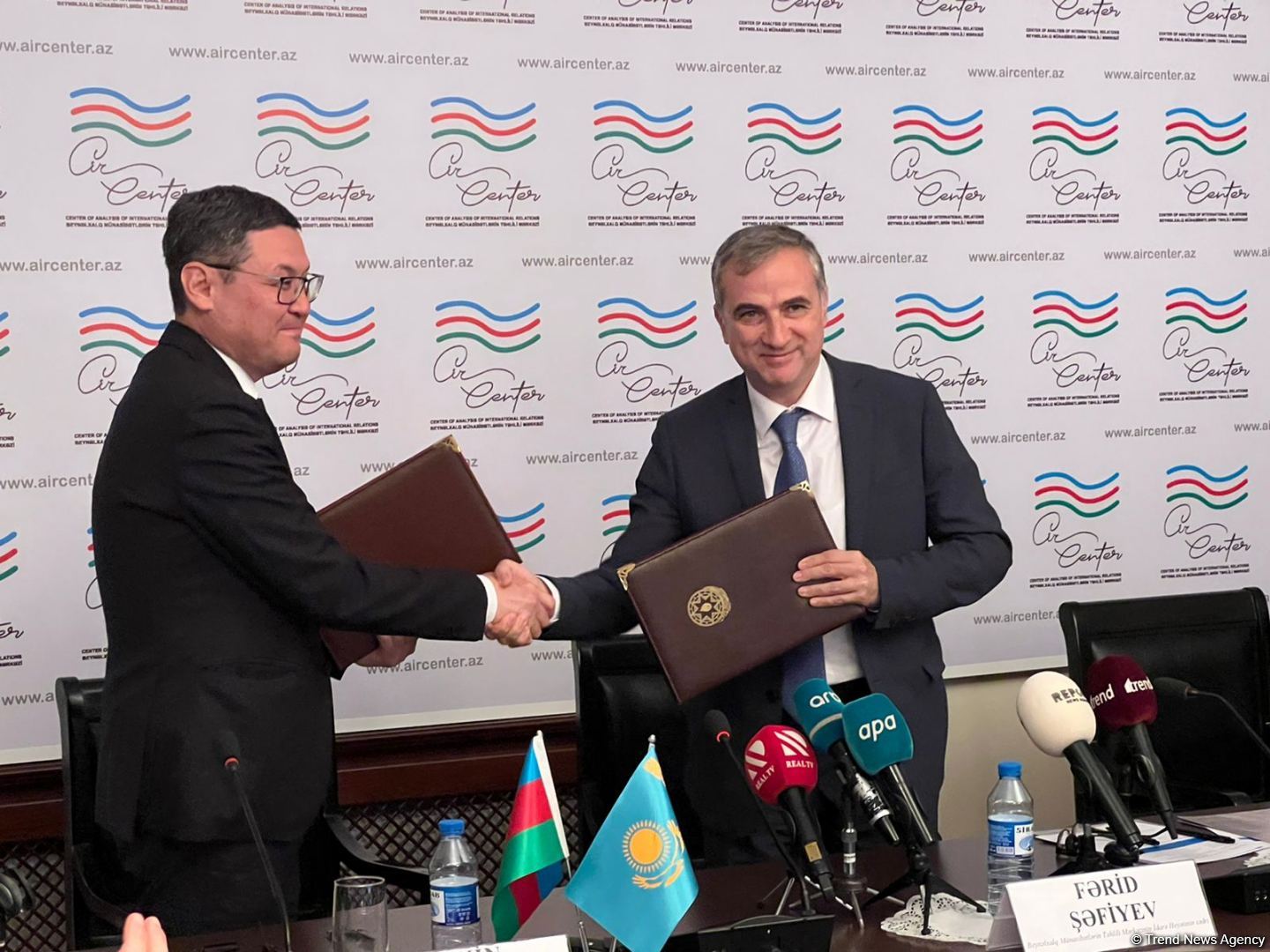 A memorandum on the establishment of the Azerbaijan-Kazakhstan Expert Council was signed between the Board Chairman of the Azerbaijani Center for Analysis of International Relations Farid Shafiyev and Director of the Institute for Strategic Studies of Kazakhstan Yerkin Tukumov, in Baku, on May 23, 2022. / Trend News Agency

Serzhan Abdykarimov, Ambassador of Kazakhstan to Azerbaijan, has said that new opportunities are emerging to strengthen Azerbaijan's position as a regional center.

"New opportunities are opening up that will strengthen the role of Azerbaijan in the region in the post-conflict period. In this sense, the Zangazur corridor opens new doors for economic cooperation," Abdykarimov said at a round table in connection with the 30th anniversary of the establishment of diplomatic relations between Azerbaijan and Kazakhstan held in Baku, on May 23, according to Trend.

He noted that mutually beneficial trade relations and mutual support in the world arena are the basis of strong relations between Azerbaijan and Kazakhstan.

A memorandum on the establishment of the Azerbaijan-Kazakhstan Expert Council was signed during the round table. The document was signed by the Board Chairman of the Azerbaijani Center for Analysis of International Relations Farid Shafiyev and Director of the Institute for Strategic Studies of Kazakhstan Yerkin Tukumov.

Farid Shafiyev said the relations between Azerbaijan and Kazakhstan are constantly developing, and added that the Middle Corridor (Trans-Caspian International Transport Route) remains an important matter of mutual interest to the two countries.

"There are many new issues on the agenda of Azerbaijan and Kazakhstan. One of such initiatives as the Middle Corridor - the route from China to Europe, plays a big role in the current agenda. The importance of this project is growing, especially in connection with the current geopolitical situation in the region" he said.

According to the board chairman, agreements on the simplification of customs procedures between the two countries have already been signed, and there is potential for further development.

During the event, Azerbaijani MP Parvin Kerimzade said that Kazakhstan and Azerbaijan always support each other on an international basis, adding that "the resolution of the Karabakh conflict has created a new reality, and all countries of the region accept this reality, which opens up new prospects for mutually beneficial cooperation".

The issue of establishing a Business Council between Azerbaijan and Kazakhstan was also discussed during the event.

Director of the Institute for Strategic Studies of Kazakhstan Yerkin Tukumov said at the round table that "over 500 Azerbaijani companies have been registered in Kazakhstan so far. In this regard, there is a need to create a Business Council between the two countries," he said.

The director of the institute also noted the successful development of cooperation between Azerbaijan and Kazakhstan in a number of areas.

Meanwhile, Fuad Naghiyev, Chairman of Azerbaijan State Tourism Agency, said in a separate meeting with Yerzhan Yerkinbayev, Deputy Culture and Sports Minister of Kazakhstan, that "Kazakhstan is one of the priority destinations for the Azerbaijani tourism market among Central Asian countries, and we are interested in further expanding our relations".

For his part, Yerkinbayev stressed Kazakhstan's interest in further expanding tourism ties with Azerbaijan, increasing the number of flights and mutual tourist flow.

Azerbaijan and Kazakhstan are cooperating in various fields of economy. The volume of foreign trade operations between the two countries amounted to $61.4 million in 2021.