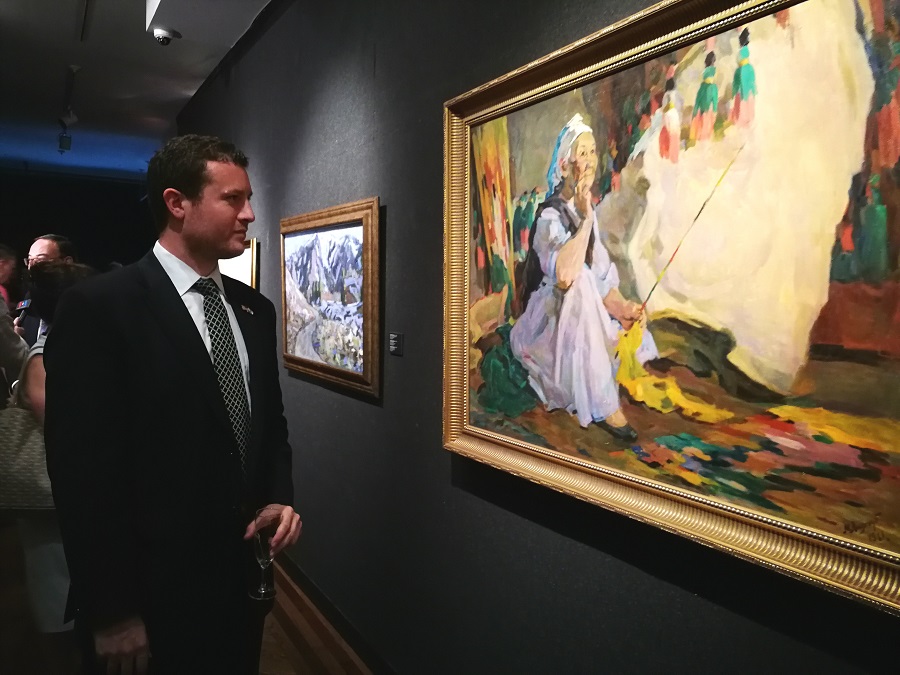 “At the Crossroads of Asia and Europe: 20th Century Masterpieces from the Kasteyev State Museum of Arts in Kazakhstan” opened at the National Arts Club in Manhattan, featuring more than 30 works. / KazInform

Kazakhstani artwork went on display in New York on Monday, showcasing the versatility and distinctiveness of the cultures founding within one of the Caspian region’s largest and most rapidly developing countries.

“At the Crossroads of Asia and Europe: 20th Century Masterpieces from the Kasteyev State Museum of Arts in Kazakhstan” opened at the National Arts Club in Manhattan, featuring more than 30 works. Included in the collection are some of the greatest examples of art from the Turkic country that were created between the 1930s and 1970s, when Kazakhstan was part of the Soviet Union. The exhibition is free and open to the public through July 15.

“With the help of this small exhibition, we want to introduce the world to our culture, history and fine arts, and we consider this [event] to be a starting point in Kazakhstan’s merging with the world cultural space,” said Gulmira Shalabayeva, the head of the Kasteyev State Museum in Almaty.

Kazakhstan has had a robust art scene since the 19th century. Russia’s famed artists Vasily Vereshchagin and Nikolai Khludov, who were traveling through Central Asia during that era, had a particular impact on the formation of Kazakhstani schools of painting.

But a real breakthrough was made in the 1950s, when local graphic artists and sculptors began using national motifs in their artworks. The collection premiering in New York highlights those achievements, which helped shape a collective identity for modern-day Kazakhstanis apart from their relationship with Russian culture and the Soviet Union.

The culture, history and life of Turkic nomads that wandered the steppes of Central Asia are illustrated by artists like Moldakhmet Kenbayev and Kamil Shayakhmetov, included in the collection, while Kazakhstan’s Beatnik era has been captured in the paintings of Salihiddin Aytbayev, Shaimardan Sariyev and Zhanatay Shardenov.

The exhibit also includes artworks by Abylkhan Kasteyev, a student of the Russian Nikolai Khludov, who is considered one of the most prominent Kazakhstani artists.

The Kasteyev State Museum is the largest art museum in Kazakhstan, and has more than 23,000 pieces of art. The month-long exhibition in New York was a collaborative effort between the museum, the Russian American Foundation, the Embassy of Kazakhstan in Washington D.C. and the Consulate General of Kazakhstan in New York City.

“We intend to promote cultural exchanges in every possible way to expand ties between Kazakhstan and the United States, and we hope that our American friends and partners will enjoy the exhibition,” said Yerzhan Kazykhanov, Kazakhstan’s ambassador to the United States.