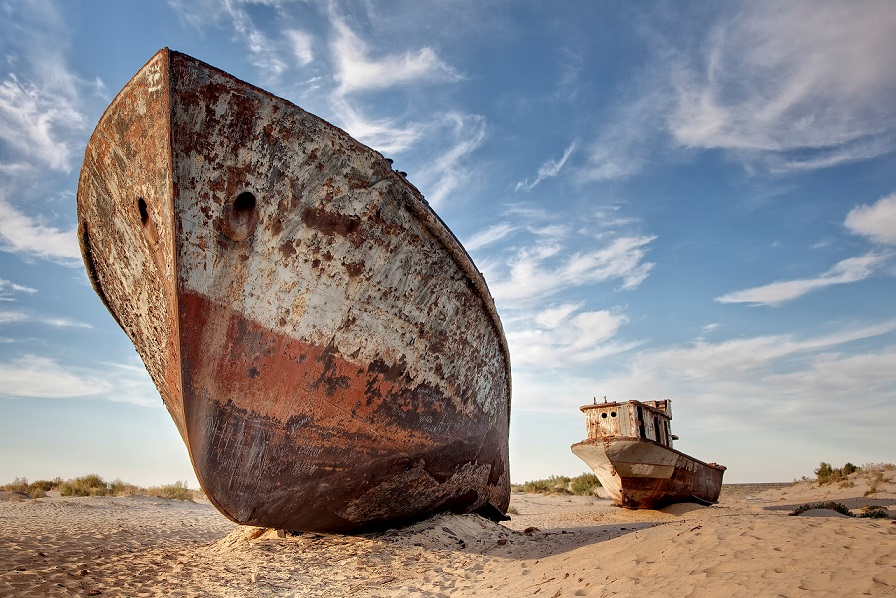 Once the world’s fourth largest lake after the Caspian Sea, Lakes Superior, and Victoria, the Aral turned into a desert over time, even burying fishing ships into the sand. / Daniel Kreher / IMAGEBROKER/CORBIS

Kazakhstan and Uzbekistan agreed on Thursday to launch a special working group that will work to restore the Aral Sea, once the world’s fourth biggest lake but now shrunken to just a fraction of its original size.

“We have agreed [to design] a joint roadmap that will allow us to find the most effective ways based on the existing achievements of Kazakhstan in this realm,” said Erik Utembaev, Kazakhstan’s envoy to Uzbekistan.

Utembaev’s remarks were made during a meeting with officials and ecology experts gathered in Karakalpakstan, an autonomous republic within Uzbekistan that includes the southern part of the Aral Sea.

“We’ve visited a number of sites and witnessed the work done by Karakalpakstan specialists – they have a good experience in breeding certain types of plant varieties that oppose the desertification of the Aral Sea,” Utembaev said, according to KazInform news agency.

The Aral Sea is considered one of the largest man-made ecological disasters, and some say it still poses a direct threat to the region’s development, public health, gene pool and the future of nearly 62 million people residing in Central Asia.

Shared by Kazakhstan and Uzbekistan, the sea had an area of seven million hectares until the 1960s. As a result of the Soviet Union’s policy, the waters of the Amu Darya River, which used to flow into the Aral, began to sink into Uzbekistan’s cotton fields, never reaching the sea. Over time the sea split into what are now two salt lakes: the South Aral Sea, or “Large Sea,” mainly within Uzbekistan’s borders, and the North Aral Sea, also called “The Small Sea,” in Kazakhstan.

In addition, the climate in the region has become arid, while winters have become colder, when temperatures drop by one to three degrees Celsius. Heavy windstorms with millions of tons of pesticides used in agriculture have destroyed once diverse fauna.

The Aral Sea fishing industry, which in its heyday employed some 40,000, has also been devastated, as 40 species of fish inhabiting the sea died out due to the harsh conditions. The most widespread inhabitant of the Aral, the Black Sea flounder, had adapted to life in salt water, but it also completely disappeared by 2003 as it failed to stand the increasingly extreme salty water.

Once the world’s fourth largest lake after the Caspian Sea, Lakes Superior, and Victoria, the Aral turned into a desert over time, even burying fishing ships into the sand.

“These big ships could not reach shallow docks when the sea started shrinking – one by one they stranded in the soft mud, and the mud became the sand in the wind you see now,” recalled Khojabay, now age 89, who had worked as a fisherman in the small village of Zhalanash located on what used to be the Aral Sea’s northern shore.

Despite the grim outlook, Central Asian countries are involved in efforts meant to raise the sea’s water levels.

The launch of the Dike Kokaral dam, which runs along the narrow stretch of water separating the North Aral Sea from the South Sea, was sponsored by the Kazakhstani government who allocated $85 million for the construction. In its turn, Uzbekistan, backed by the United Nations, launched a program to improve the standard of living for populations inhabiting rural areas around the Aral Sea.

Although some experts believe the Aral Sea crisis is a completely man-made disaster, others believe that people are not the only factor at play.

“In the thousands-year-long history of the sea there were periods when it dried up to its modern-day level and then [the water] again raised to its erstwhile coastline,” said Peter Zavyalov in 2014, a deputy director at the Moscow-based Institute of Oceanology, citing the cyclical climate changes as the main reason.

“I think the Aral will come back, but nobody knows when this will happen,” Zavyalov said.