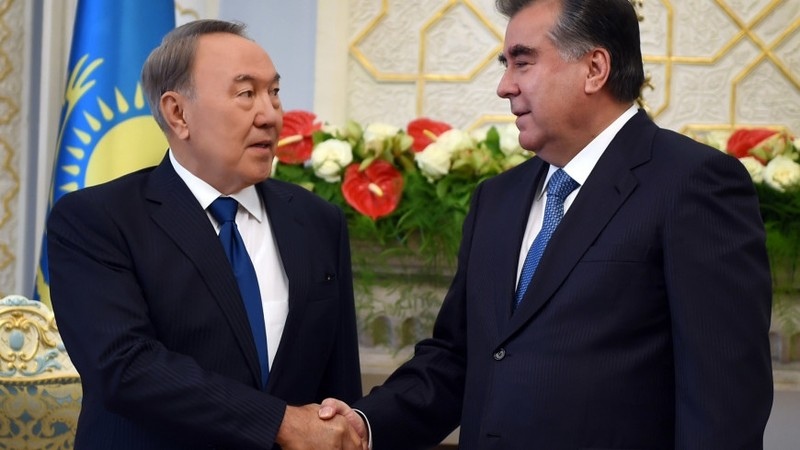 Kazakhstan President Nursultan Nazarbayev (on the left) and Tajikistan President Emomali Rahmon (on the right) during the official meeting in Astana on March 14.

The Caspian region’s Kazakhstan is teaming up with a neighboring Central Asian country, Tajikistan, to fight against what is a perceived common threat in the region, namely religious extremism.

During the official visit of Tajikistani President Emomali Rahmon to Astana on March 14, Kazakhstan’s Ministry of Religious and Civil Society Affairs and Tajikistan’s State Committee for Religious Affairs and Regulation of Traditions, Ceremonies and Rituals signed a Memorandum on Cooperation.

"The Memorandum ensures the exchange of experience in the implementation of state policy in the sphere of religion, including the prevention of religious extremism," read the official statement.

According to the memorandum both countries will share their experience in dealing with religious extremism, in order to prevent the spreading of destructive ideology.

Kazakhstan’s President Nursultan Nazarbayev and his Tajikistani counterpart signed several agreements during Rahmon’s visit, with several that buttress the effort to stop the growth of extremism within the region.

“Three agreements on migration and re-admission will improve the exchange of information, which will then improve the legal mechanism and citizens' stay on the territory of our countries,” Nazarbayev said, according to Kazakh-tv.kz, following the meeting.

After the Soviet Union collapsed in 1991, religious fervor in a part of the world where atheism was actively promoted took off, and propaganda published by religious organizations increased.

While most of the world’s attention has been fixated on Afghanistan and the Taliban in regards to religious extremism, the broader region, Central Asia, was no stranger to fundamentalist ideologies spreading. Terrorist attacks have hit Uzbekistan, where extremists have tried to overthrow the government. The Islamic Movement of Uzbekistan, after its exile from the country, took root in Afghanistan and joined forces with the Taliban.

Developments in Syria, Iraq and Afghanistan only exacerbated the situation, as terrorist groups have actively recruited citizens from Central Asian countries.

According to the security consultancy called Soufan Group, more than 2,000 Central Asian foreign fighters have joined the Islamic State and other extremist groups in Iraq and Syria, with about 300 of them from Kazakhstan. These numbers may seem small compared to the tens of thousands of fighters that have been present in places like Afghanistan and Iraq, but they worry leaders in capitals all throughout the region.

Kazakhstan is considered Central Asia’s most stable country, but even it has not been immune to attacks. In 2016, the northwest city of Aktobe witnessed a series of attacks that killed 25 people. Since then, Nazarbayev’s government has been active in anti- and counter-terrorism planning and operations.

Last year Kazakhstan trained Special Forces units within its military, to prepare for any possible future attacks, and teamed up with regional states. Dostarym 2017 (“Friendship 2017”) included Pakistan, while Prabal Dostyk 2017 was a two-week exercise with India.