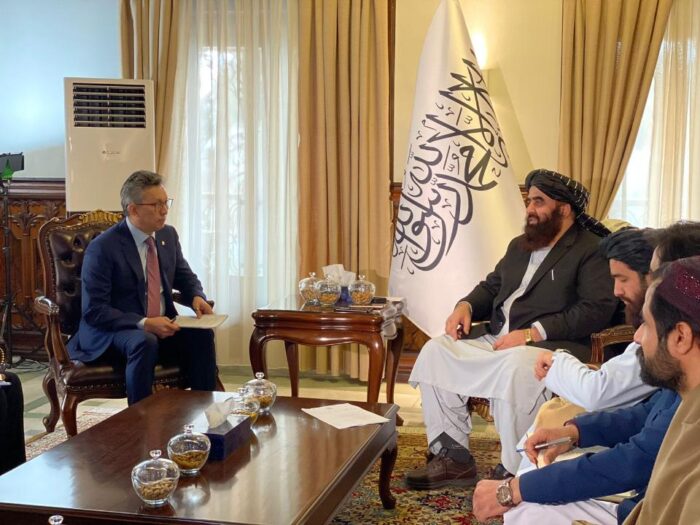 Since the Taliban’s takeover of the country in mid-August, conditions in Afghanistan have deteriorated, placing the region at risk of food insecurity and other serious challenges. / Kazakh Ministry of Trade and Integration

"Today we brought with us 1.5 tons of cargo (medicines)," Sultanov said, according to a statement issued by the ministry on Monday. "In addition, a humanitarian cargo with food and medicines in the amount of about 155 tons or $1.9 million has departed from Kazakhstan and will arrive soon to Afghanistan."

During his visit to Kabul, Sultanov reaffirmed Kazakhstan's support and active participation in the UN efforts to tackle the humanitarian crisis in Afghanistan. According to him, the World Food Program recently purchased 20,000 tons of Kazakh flour.

"Our country, like other international partners, expresses the hope that the active phase of the conflict is over and the time has come for the country's reconstruction in the post-conflict period," he added.

At the meeting, Sultanov reminded that the government had allocated humanitarian aid to Afghanistan in the form of 5,000 tons of flour at the order of President Kassym-Jomart Tokayev.

As a traditionally major supplier of flour and grain to Afghanistan, Kazakhstan is interested in maintaining and increasing the scope of bilateral trade, both in volumes and by expanding the range of goods within it. The Kazakh delegation mentioned that more than half of all exports of Kazakh flour and more than ten percent of grain exports have been consumed lately by the Afghan market.

Regime change in Kabul hit the trade turnover with Central Asia's largest country that saw a 27.5% decline in trade volume with Afghanistan in January-October 2021, amounting to $345.9 million. Trade between the two countries stood at $477.1 million over the same period last year. Exports from Kazakhstan to Afghanistan in January-October 2021 decreased by 28.1% and amounted to $342.2 million, while imports in the same period tripled and amounted to $3.7 million.

Since the Taliban’s takeover of the country in mid-August, conditions in Afghanistan have deteriorated, placing the region at risk of food insecurity and other serious challenges. According to a report issued by the Integrated Food Security Phase Classification (IPC), nearly 19 million Afghans, or 47 percent of the population, saw high levels of acute food insecurity between September and October of this year.

The Taliban launched massive offensive recapturing swaths of land, including major cities and provinces, simultaneously with the withdrawal of the US servicemen. The group’s return to power after being ousted in 2001 finished with the fall of the capital Kabul on August 15. President Ashraf Gani fled the country to avoid what he claimed could be "bloodshed." The militant group changed Afghanistan's name for the "Islamic Emirate of Afghanistan," promising to establish an inclusive government in line with the Islamic Sharia law.