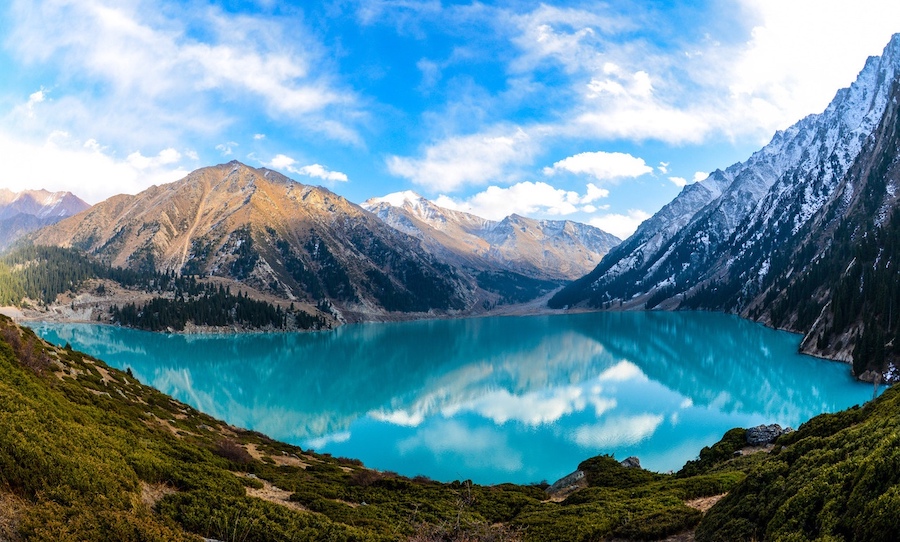 Launched in 1996 on the extreme northern arc of the Tien Shan mountain range, Ile-Alatau National Park is a must-see on the tourist trail.

Kazakhstan’s ecotourism sector will get a makeover, as officials announced this week the government’s intent to develop national parks in what is Central Asia’s largest country.

Magzum Mirzagaliyev, who heads Kazakhstan’s ecology, geology, and natural resources agency, is convinced this niche sector could attract up to 12.5 million visitors to national parks hoping to leverage their natural beauty to generate income.

According to him, the development of ecotourism in Kazakhstan will absorb nearly $1.2 billion by 2030.

‘‘The volume of private investments in national parks will reach 500 billion tenge, while the flow of visitors will increase from the current 1.5 million to 12.5 million tourists, with up to 20,000 additional jobs created — apart from related industries,” Kazakhstan-based Kazinform news agency quoted Mirzagaliyev as saying.

Kazakhstan is Central Asia’s largest economy, and the ninth largest country in the world in terms of size. Officials and tourism professionals are banking on the scope and scale of natural landscapes – from large, sunny steppes, to mountain ranges and lakes – to attract visitors from around the globe. In 2019, the government recorded a record influx, with more than nine million tourists entering – a 10 percent increase from the year before.

At the same time, the country sees hope in its diverse wildlife. There are specially protected natural areas in the country, including 10 reserves and 13 national parks owned by the state. Altyn Emel National Park is considered the largest in the country, covering the territory of more than 1.2 million acres in the south of Kazakhstan. In 2018, Kazakhstan launched its thirteenth national park, Tarbagatai, in the East Kazakhstan Region that borders China.

As of 2019, the country’s national parks saw more than 1.5 million visitors.

Officials in Nur-Sultan believe visitor numbers are too low due to the low quality of accommodation, catering and the lack of appropriate infrastructures such as equipped trails, information centers, rental points, souvenir shops, and viewing platforms.

Mirzagaliyev said Kazakhstan is now working to outline the best practices of other countries, including the United States, to develop local ecotourism and revive national parks.

The U.S. owns 59 sites known as national parks, which are operated by the National Park Service. National parks attract millions of visitors each year owing to their vast capacity for outdoor recreation — an estimated 327.5 million people visited national parks in the U.S. in 2019, up 9 million visits or 2.9 percent from 2018. Great Smoky Mountains National Park, with parts in Tennessee and North Carolina, topped the ranking with 12,5 million visitors last year. As of 2018, visitors to national parks spent an estimated $20.2 billion in local gateway regions, which contributed to the national economy, according to the data compiled by the National Park Service and the U.S. Department of the Interior.

‘‘We are going to use the American model for the development of national parks. The preference will be given to the development of hiking trails and routes, without a major overhaul, with the placement of glamping, campings, viewing platforms, ethnic villages, and camps along the trails,’’ said Mirzagaliyev.

Meanwhile, the ministry of ecology, geology, and natural resources has already designed relevant strategies for the development of four national parks located in the Almaty mountain cluster — Ile-Alatau, Charyn, Altyn-Emel, as well as Kolsay Lakes.

"We are planning to build 13 modern visit centers and launch more than 590 kilometers of hiking routes in national parks of the Almaty region,’’ said Mirzagaliyev.

In addition, at the initiative of the ministry, a special council will be created to discuss all issues related to the development of ecotourism in Kazakhstan. The government structure will include tourism experts, representatives of the ministry, as well as public and environmental activists. The council will allow monitoring investors’ activities, while all its members will be able to participate in the discussion of the national park development plan and, if necessary, to influence its implementation.