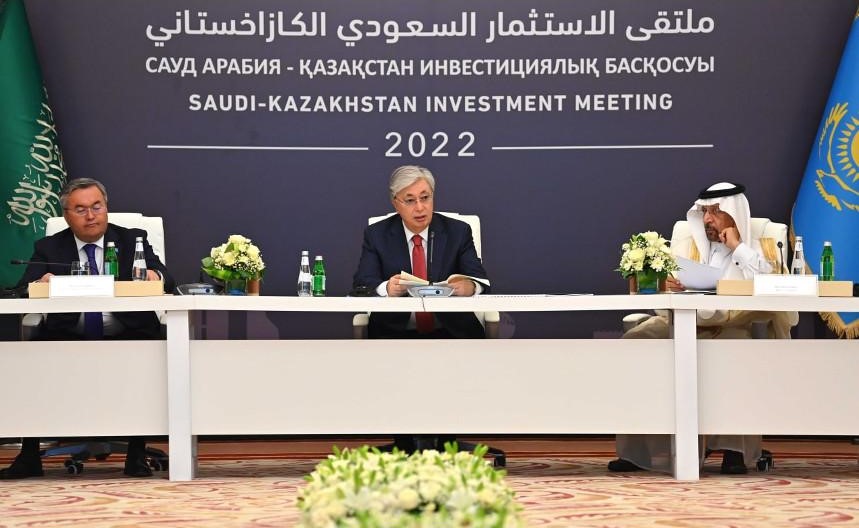 The package of documents included Memorandums of understanding (MoU) in the fields of energy, trade, stock exchange, investment, media, culture, sport, and agriculture.

The Kazakh president arrived in Saudi Arabia on July 23 to hold a number of meetings with top Saudi officials and entrepreneurs. The two countries’ top officials discussed plans to develop the petrochemical industry, nuclear energy, the production of green hydrogen, and other areas, including space exploration.

“Kazakh-Saudi relations are now at a high level. However, we would like to give a new impetus to cooperation. This decision meets the common interests of our countries. I am confident that our mutually beneficial relations will continue to strengthen in the future,” the Kazakh president said.

He further described Saudi Arabia as “one of Kazakhstan’s leading strategic partners,” and said that his country was ready to offer special conditions and a wide range of preferences for Saudi investors in various promising areas of mutual interest.

In his turn, Mohammed bin Salman expressed satisfaction with the level of relations between the two countries and noted the great potential for further strengthening and developing these ties.

He expressed the interest of Saudi companies in investing in the Kazakh agriculture sector. According to the Saudi Crown Prince, this area is of particular significance amid the global food crisis.

Meanwhile, during his visit to Saudi Arabia, President Tokayev offered local investors to take part in the exploration and development of over 60 Kazakh deposits of precious and non-ferrous metals, as the country ranks first in the world in terms of tungsten reserves and second in terms of uranium and chromium deposits.

“Kazakhstan ranks first globally in tungsten reserves, second in uranium and chromium ore, and in the top 5 in manganese, silver, zinc, and lead. These reserves are waiting for their exploration and development. Given our proximity to the booming Chinese and South Asian markets, this presents a truly excellent investment opportunity. Today we can offer more than 60 deposits of precious and non-ferrous metals for exploration and development,” the president said at the Kazakhstan-Saudi Arabia investment roundtable on July 24, according to a statement issued by Akorda.kz.

President Tokayev also described the diversification and expansion of transit-transport and logistics opportunities to be the second important direction, including the Trans-Caspian corridor, connecting China, Kazakhstan, Azerbaijan, Georgia, and Türkiye.

Speaking at the Kazakh-Saudi investment roundtable, the Kazakh president said that his country welcomed Saudi Arabia’s intention to develop its own space program as part of the Saudi Vision-2030 strategy, adding that his country is ready to cooperate with the kingdom in space exploration.

“Kazakhstan also has extensive experience and resources for the development of the aerospace industry. Our companies are ready to engage with state and private companies of Saudi Arabia in these areas,” President Tokayev said.

He also expressed his country’s readiness “to become one of the stable, long-term suppliers of high-quality wheat, flour, and oilseeds” to Saudi Arabia.

Kazakhstan ranks second in the world in terms of arable land per capita and fifth in terms of pasture resources that make up 180 million hectares. The Central Asian country is one of the 10 largest producers of wheat and flour in the world.