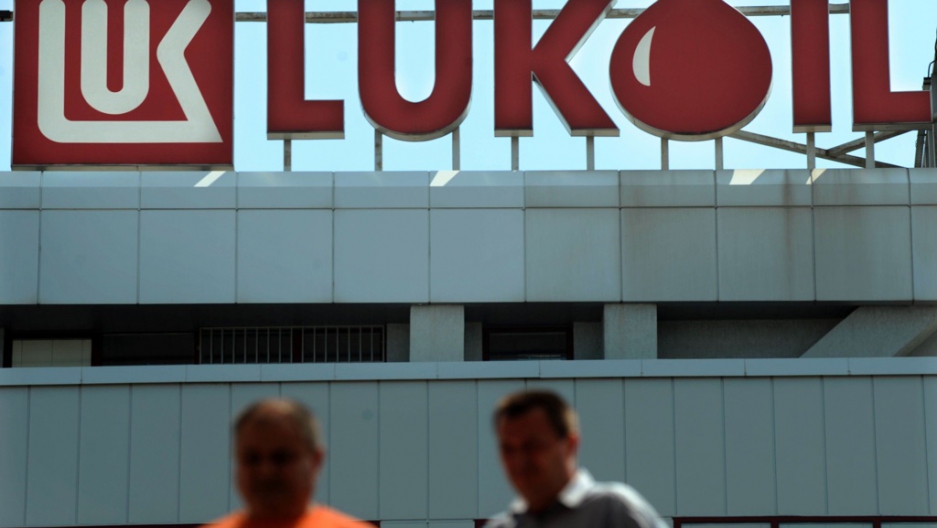 The project in Kazakhstan will not be a first for Lukoil, which has been involved there since 1995. / Nikolay Doychinov / Public Radio International

Being home to some of the world’s richest oil and gas deposits, it is natural that two countries from the Caspian region are teaming up to help ensure regional energy security. The St. Petersburg International Economic Forum, held last week, resulted in oil and gas deals between Russia and Kazakhstan.

Following the deal signed last Friday, state-owned KazMunayGas (KMG) and Russia’s energy giant Lukoil, agreed on the basic conditions for the implementation of a project known simply as “IP2,” located in Kazakhstan’s portion of the Caspian Sea. Officials from both sides are now one step closer to signing a contract, as the companies await approval from Kazakhstan’s energy ministry.

Meanwhile, officials at KMG have not revealed details of the document signed Friday. Kanat Bozumbayev, who heads the Ministry of Energy in Nur-Sultan, says the companies have not yet approached him on the issue.

“Basically, KMG’s [offshore] principles include financing by the partner, that is, all costs for the development, exploration and development are borne by the partner, and when the decisive phase is underway, [financing is carried] jointly,” Bozumbayev said while addressing Monday’s meeting of the country’s parliament, according to reports by Informburo.

The oil and gas industries are the main pillars for both Moscow and Nur-Sultan – the capital of Kazakhstan, formerly known as Astana – as both Russia and Kazakhstan are flush with hydrocarbons. The two post-Soviet countries have maintained strong partnerships in the energy sector through already existing close economic, technological and transportation initiatives.

The project in Kazakhstan will not be a first for Lukoil, which has been involved there since 1995. Together with Rosneft, the company has been responsible for exploration of the Tengiz oil and gas field, which ranks as the world’s deepest supergiant oil field.

Along with Zhenis and IP2, the companies also jointly explore the Tsentralnoye field, where Lukoil and Gazpromneft own 25 percent each, as well as the Khvalynskoye field, where Lukoil owns 50 percent. At the same time, Lukoil is responsible for exploration of the Karachaganak (13.5 percent) and Kumkol (50 percent) fields. Project participants also include Transneft, KazMunayGas, Kazakhstan Pipeline Ventures, as well as Chevron, ExxonMobil, SP Rosneft-Shell, Shell, Eni and Oryx Caspian Pipeline. Lukoil is a member of the Caspian Pipeline Consortium, through which the entire volume of crude oil is transported.

Earlier this year, KMG and Lukoil were given rights to subsoil use of the Zhenis field, which lies at a depth of 75 to 100 meters (82-109 yards). A joint consortium is being formed that will oversee well drilling and seismic work, which is expected to take place in two phases and cost roughly $270 million.

Some believe Lukoil’s interest in the Kazakhstani sector of the Caspian Sea is due to Kazakhstan’s new tax legislation that gives perks to companies operating on its shelf.

In 2018, Kazakhstan overhauled its tax policy. Now, instead of paying historical costs, mineral extraction tax and excess profits tax, there is an incremental alternative tax that takes into account the volatility of oil prices. For example, if the price of oil is below $50 per barrel, the tax bill is zero. Prices above $50 incur a progressive tax that reaches as high as 30 percent for oil priced at $90 a barrel.