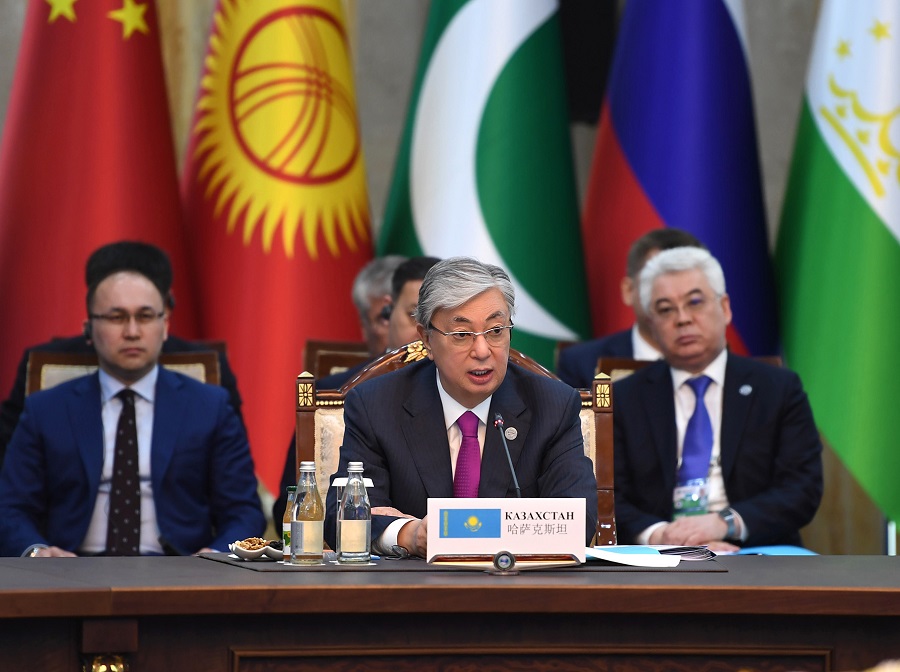 Kazakhstan’s top official believes his country can positively contribute to global security thanks to the document, which is already signed by more than 70 countries. / Ak Orda

Kazakhstan’s newly-elected President Kassym-Jomart Tokayev has called on the Shanghai Cooperation Organization (SCO) to launch a new initiative that will help member states combat the growing threat of cyber terrorism, saying there is a need for a special center to handle the challenge.

“The problem of terrorism has its effect on the global network and requires additional measures to ensure cyber security. The creation of the information security center would be an important contribution to the protection of the organization’s cyberspace,” President Tokayev said Friday, while addressing the annual summit of the SCO in Bishkek, Kyrgyzstan, according to reports by Kazinform.

The SCO was created in 2001 by Russia, China, Kazakhstan, Kyrgyzstan, Tajikistan and Uzbekistan, and is the successor to the “Shanghai Five,” established in 1996 with the exception of Uzbekistan. The bloc had formed after the signing of two border security coordination agreements – one in Shanghai, China in 1996 and another in Moscow the following year. Since then, the SCO has expanded its membership to eight countries, with India and Pakistan joining the bloc as full members in 2017.

The group has established the “three pillars”, or defining cooperation in the security, economic and cultural fields as major areas of concern. But the main focus of SCO has been on security matters, although the organization does not position itself as a military bloc.

Meanwhile, the rise of extremism and radicalism has become a major threat to SCO members and observer countries. Terrorist acts have taken place in Kazakhstan, Russia, Afghanistan and Pakistan in recent years, underscoring the urgency of the problem.

The most recent attack on an SCO-related country was on Easter Sunday this year in Sri Lanka, which is considered a “dialogue partner” to SCO, similar to Turkey, Azerbaijan, Nepal and Cambodia. On April 21, three churches and three luxury hotels in the capital city Colombo were targeted in a series of coordinated suicide bombings, claimed by the Islamic State (IS) terrorist group. Later that day, there were smaller explosions at a housing complex in Dematagoda and a guest house in Dehiwala. Two hundred and fifty-eight people were killed, including at least 45 foreign nationals and three police officers, and roughly 500 others were injured.

“The unprecedented attacks in Sri Lanka confirm the relevance of Kazakhstan’s initiative to form a global anti-terrorist coalition under the United Nations auspices,” said President Tokayev, referring to a new “Code of Conduct to Achieve a World Free of Terrorism” that was presented at the 73rd UN General Assembly in New York last September.

Tokayev says Kazakhstan can positively contribute to global security thanks to the document, which is already signed by more than 70 countries.

What is Central Asia’s largest country and the region’s most successful economy has worked hard over the past quarter of a century to create an image of peacemaker and guarantor of political stability in Central Asia. The country, however, has repeatedly faced threats of religious extremism.

To that end, Kazakhstani officials plan on spending more than 226 billion tenge (roughly $700 million) over the next four years to combat it. Their plan call for monitoring mass media and web-based resources, including social networks, to identify and neutralize terrorist and extremist propaganda. It also calls for strengthening Kazakhstan’s borders and ban the importation of prohibited materials.