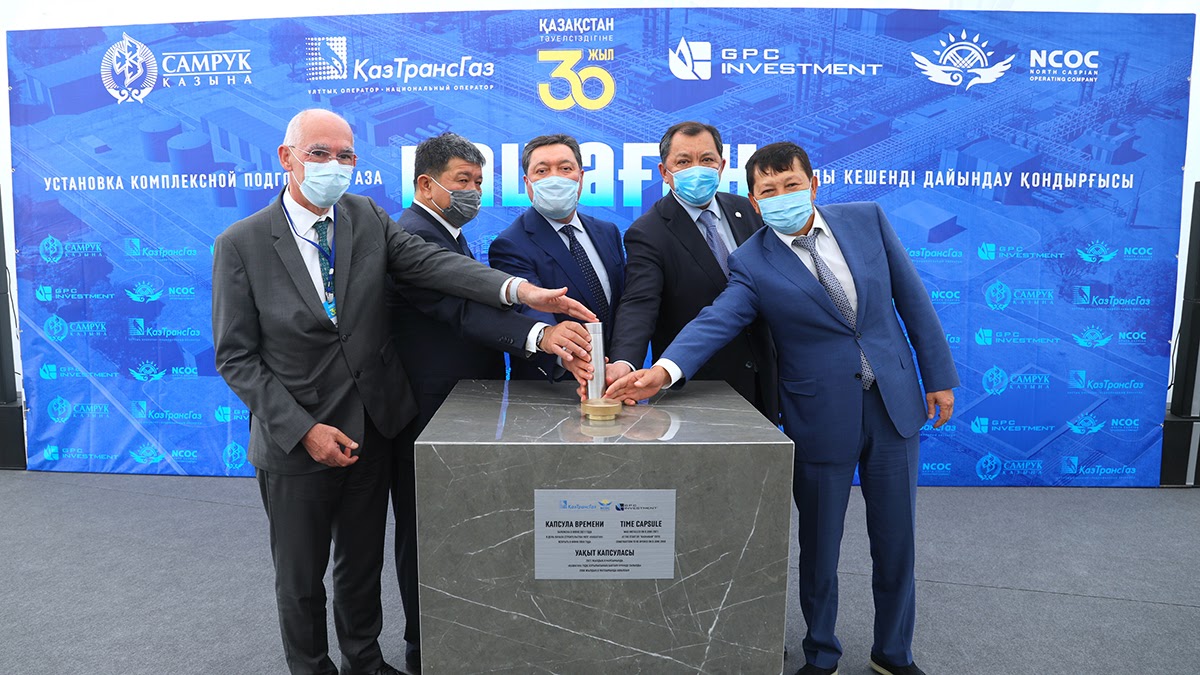 As part of his working trip to the Atyrau region, Prime Minister Askar Mamin (in the middle) launched the construction of a gas processing plant at the Kashagan field. / Official website of the Prime Minister of Kazakhstan

Kazakhstan’s Prime Minister Askar Mamin has launched the construction of a gas processing plant at the Central Asian nation’s biggest oilfield, Kashagan, which will further strengthen the petroleum industry.

The project is being implemented as part of the second stage of Kashagan development.

According to the country’s government, the gas processing plant will produce 1 billion cubic meters of gas per year, including commercial and liquefied gas, sulfur, and gas condensate, using feedstock from Kashagan. The facility is also expected to help increase crude oil production as it will refine raw materials from highly toxic and aggressive hydrogen sulfide present in associated natural gas.

“The project will give impetus to the development of the country’s gas processing industry, increase the level of oil production at Kashagan to 450,000 barrels per day, expand the resource base for further gas supply of the country and improve the environmental friendliness of oil and gas production,” reads a statement published on the prime minister’s website.

In addition, up to 2,500 temporary jobs will be created here during the construction period, and 600 permanent jobs — during the operation period.

Kazakh GPC Investment company will reportedly build the plant, which is set to come online in late 2023. Previously, officials in Nur-Sultan said they were discussing the project with a group of global energy companies engaged in the development of Kashagan, including Eni, Total, Royal Dutch Shell, ExxonMobil, CNPC, and Inpex.

The deal will cost the Kazakh company $860 million.

Meanwhile, Kazakhstan decreased crude oil production in the past five months of the current year as exploration and extraction of its oil declined by 7.8 percent, reaching 35.5 million tons. Tengiz produced more crude oil than any other field of Kazakhstan, while Kashagan ranked second, producing 6.2 million in January-May 2021.

The country exported 28.1 million tons of crude oil in the same period, according to Nurlan Nogayev, who heads the country’s energy ministry.

Kashagan was found in 2000 and today is considered to be one of the world’s largest discoveries of the past four decades. Located in the northern part of the Caspian Sea close to Atyrau, the giant field is believed to contain between 9 and 13 billion barrels of crude oil, according to the field operator.

The first offshore oil in the history of Kazakhstan was commercially produced from Kashagan in 2016.

The construction of the gas processing plant at Kashagan is no coincidence. The light crude oil from the Kashagan field has a high sour gas content (H2S) and carbon dioxide (Co2). The particular challenge of Kashagan is posed by the harsh operating environment, which requires many more precautions and a much larger investment to manage the safety risks.