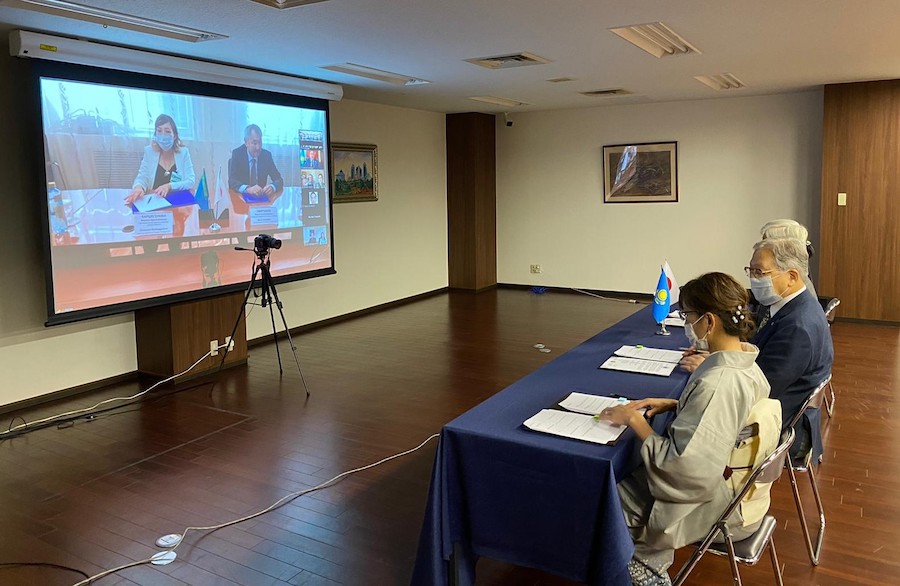 Kazakhstani and Japanese companies signed a series of agreements as part of an online meeting held at the Kazakhstan embassy in Tokyo. / Kazakhstan Embassy in Japan

Nur-Sultan has announced this week a series of contracts with Japanese companies after Tokyo expressed interest in developing closer ties with Central Asia's wealthiest country.

The deals are worth $46 million, according to a statement issued by the Kazakhstan embassy in Japan on Wednesday.

Speaking at the meeting, Kazakh Ambassador to Tokyo Erlan Baudarbek-Kozhataev voiced confidence that despite economic turmoil caused by the novel coronavirus pandemic, “the favorable investment climate created in Kazakhstan is of great interest to Japanese investors.”

Under the agreements signed between the two nations, Japanese companies, including Smart Eco System, Number 1 Solution, S Objects, and Nippon Investment Operating Company will launch in Kazakhstan the project to introduce blockchain technologies in such industries as manufacturing, agriculture, infrastructure and communications.

The project will be implemented using Japanese technologies, such as Wi-Sun, a wireless communication standard that enables seamless connectivity between smart-grid devices. In addition, cryptocurrency experts from Japan will help Kazakhstan launch a crypto currency stock exchange based on the Security Token Offering platform. Both initiatives are aimed to develop the Astana International Financial Center (AIFC), a regional financial hub based on English common law. The initial stage is expected to cost investors $13 million.

Umirzak Service signed partnerships with Nippon Investment Operating Company and Snin EiTec for the construction of a plant that will manufacture metal goods for the local oil, mining, and construction industries. The facility worth $8 million will be located in Kazakhstan’s Atyrau region, known for its petroleum.

At the same time, Kazakhstan will receive $25 million in Japanese investments for a series of projects aimed at the development of the country’s healthcare system. Under one of the agreements, Japan will build a multifunctional diagnostic center with the latest Japanese medical equipment in Atyrau. In addition, Medical Excellence Japan and Nippon Investment Operating Company will organize training and internships for Kazakh healthcare experts.

Japanese interest in the Caspian and Central Asian state is nothing new.

Tokyo’s direct investments in Kazakhstan over the past 23 years amounted to around $7.3 billion, making it one of the country’s largest investors, according to Kazakh Invest national company. Tokyo’s investments in Kazakhstan involve more than 70 different enterprises engaged in industries ranging from the oil and gas sectors to metallurgy, finance, mining, telecommunications and logistics.

Japan has been involved in energy-related activities in Kazakhstan since the country gained independence, after the dissolution of the USSR in 1991. At that time, Japanese energy companies, such as the government-backed Japan Oil, Gas and Metals National Corporation (JOGMEC), helped modernize energy-rich Kazakhstan’s Soviet-era oil refineries, as well as support mining operations in a country that has the world’s second largest deposits of uranium.

At the same time, some Japanese oil giants, including Inpex and Itochu, have their stakes in a range of regional projects, such as Kashagan — one of the largest oil fields in the world, with the total oil reserves standing at 38 billion barrels. In 2018, JOGMEC announced that it would provide equity financing in amount of about $573 million to INPEX North Caspian Sea Ltd.