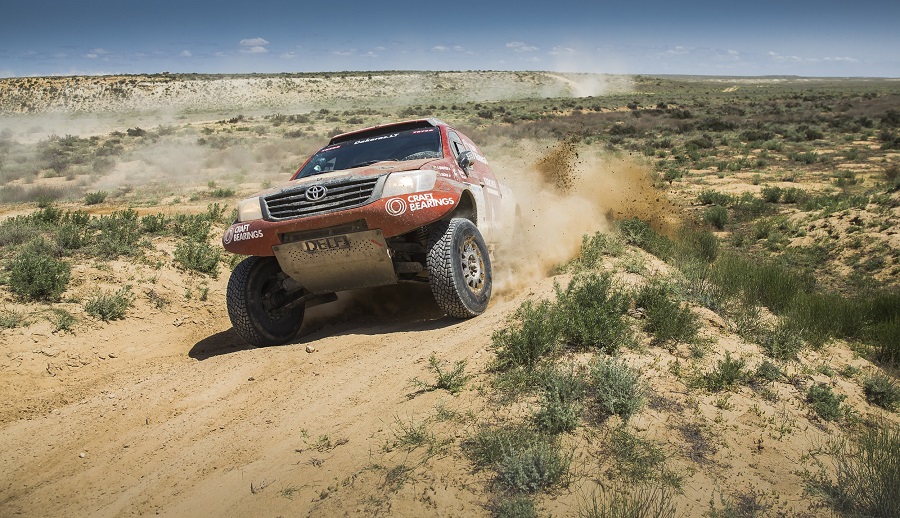 The fifth stage of the 2018 FIA Cross-Country Rally World Cup Kicks Off in Kazakhstan. / rallykazakhstan.com

Some of the world’s best long distance off-road racing enthusiasts are whizzing through Kazakhstan’s southwestern region of Mangystau, where the 2018 Cross-Country Rally World Cup is currently being held, for the second consecutive year.

The race is organized by the Federation Internationale de l'Automobile (FIA). Kazakhstan represents the fifth segment in a racing season that will close in Portalegre, Portugal in October.

This year’s route through Mangystau is exactly the same as last year, when more than 50 drivers experienced the 1,550-mile route and passed by the eastern shoreline of the Caspian Sea. The Kazakhstan segment is comprised of six stages.

The first stage, which kicked off on May 27, saw drivers make their way towards the Kenderli resort from the coastal city of Aktau, while the next day of the rally featured a circular section through the vast deserts up to the east of Mangystau. The fourth stage will be held around the city of Zhanaozen, before participants return to Aktau, from where the drivers will head up to the north of the country along the Caspian seaboard.

The event will wrap up on June 2 with a final race in Aktau.

“The cross-country rally is considered one of the most popular disciplines in the world of motorsport, and we are proud to hold a race in the Mangystau region, with its incredible landscapes and unique natural complexes that create serious trials for participants of all levels,” said Marat Abykayev, who chairs the Kazakhstan Automotosport Federation.

Mangystau or Mangyshlak, which means “thousands of winter huts” in Kazakh, holds more than 11,000 historical, state-protected monuments and archaeological finds. Although the region is considered to be harsh, it is surprisingly diverse given its yellow desert sand dunes, turquoise waves along the Caspian shoreline, as well as deep canyons, pointed chalk rocks and vast steppes.

In the first millennium BC, Mangystau was a part of the Great Silk Road, which stretched from China to Europe and included parts of the Middle East. While the area had been of great interest to merchants and travelers that camped at its caravanserais, or roadside inns, as a result of migration forces in the first millennium AD and the medieval Mongol invasion, this part of the Great Silk Road was finally erased.

The vast territories of Mangystau have brought together 64 drivers from 13 countries, including FIA World Cup reigning leader Jakub Przygonski from Poland, as well as French driver Luc Alphand – the first ex-skier to win the Paris-Dakar. The winner of the last year’s World Cup, Qatari racer Nasser Al-Attiyah, is also competing in Kazakhstan this week.

Federation Internationale de l'Automobile, or “FIA,” races are held annually and can cover territories in multiple countries. The next and sixth stage of the rally will be held in Italy, from June 21-24.