Kazakhstan Highlights Relationship With China Prior To SCO Annual Summit 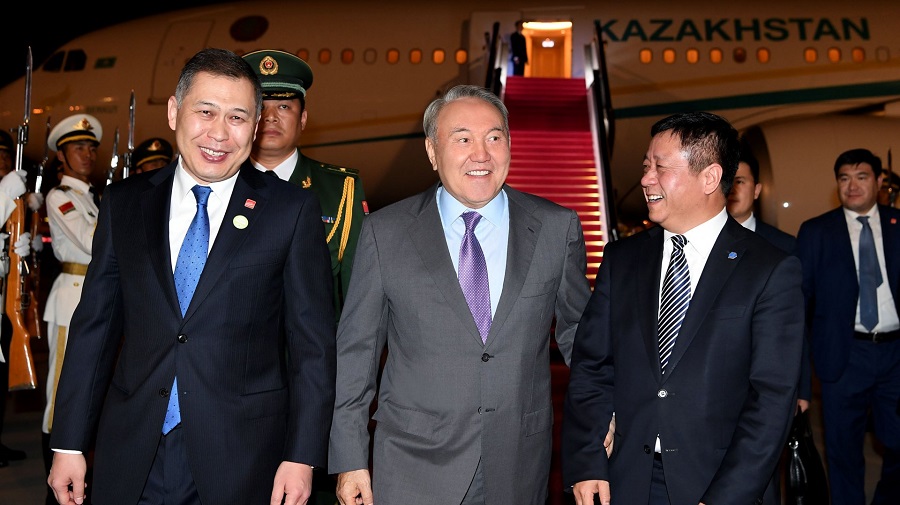 Kazakhstan's President Nursultan Nazarbayev (in the middle) as he arrived in China to attend an annual meeting of the Shanghai Cooperation Organization. / TengriNews

With only a few days remaining before the annual summit of the Shanghai Cooperation Organization (SCO) kicks off in Qingdao, China, financial experts in Astana announced Tuesday that Kazakhstan and China, both SCO member states, have successfully expanded bilateral trade and investment ties.

In 2017, the amount of trade turnover between the two neighboring nations amounted to $10.5 billion, up 32.6 percent from the previous year, according to the Kazakhstan National Bank. At the same time, Chinese direct investments in Kazakhstan totaled roughly $1 billion last year, putting China in the sixth place among countries investing in what is Central Asia’s largest economy.

Meanwhile, officials at Ak Orda, the official residence of Kazakhstan’s President Nursultan Nazarbayev, said that his trip to China will give an additional boost to long-standing relations between Beijing and Astana.

“As part of his visit, Nursultan Nazarbayev will hold talks with China’s top officials, and a series of significant documents are expected to be inked,” Aidos Ukibay, Ak Orda’s press secretary said Tuesday. Ukibay did not reveal what topics and sectors are covered by the agreements.

After almost 27 years of Kazakhstani independence from the USSR, China has invested $16 billion. As of today more than 2,500 facilities with Chinese investments operate in Kazakhstan, while roughly 50 joint industrial projects worth over $27 billion are managed by Kazakhstan’s Investment and Development Ministry.

For example, Chinese CNPC has developed oil and gas facilities in Kazakhstan’s Aktobe region, while a bitumen production plant in Aktau was constructed thanks to a joint venture launched, in part, by China’s CITIC. At the same time, Chinese financial institutions, such as Bank of China and China Development Bank, are actively financing infrastructure projects throughout the vast territory of what is China’s western neighbor.

Relations kicked into high gear in 2015, when five agreements were inked to create “frontier cluster cooperation zones” that aimed to strengthen ties in areas like transportation infrastructure, trade, manufacturing, construction and agriculture.

The package of the documents included a program that addressed cross-border cooperation; a five-year plan covering 2015-20. Thanks to the program, the two countries have already launched the Khorgos Eastern Gate Special Economic Zone, located six kilometers away from the Altynkol border crossing between Kazakhstan and China. The economic zone gives Kazakhstan access to the Western Europe-Western China highway, which is the country’s longest road, running a total length of 8,445 km. Approximately 65 trains per month move through Khorgos.

In addition, China and Kazakhstan plan to increase the capacity of railway lines connecting Dostyk, Alashankou, Altynkol, and Khorgos, as well as to explore the possibilities of building a railway line connecting the Altai and Tachchen districts of China with the East Kazakhstan region.