Kazakhstan: Death Toll Rises to 15 After Explosion at Arms Depot 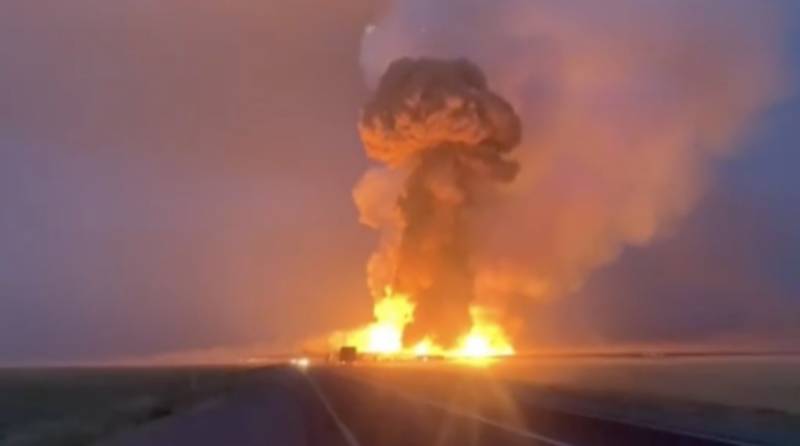 The explosion at ammunition depot, which reportedly housed more than 500 tons of trinitrotoluene (TNT), have killed 15 people and injured nearly 100.

Blasts in Kazakhstan’s southern Jambyl region at an ammunition depot have killed 15 people and injured nearly 100, the country’s ministry of emergency situations said on Monday. The search for one more is underway.

The fire at the Soviet-era depot, which stored some engineering-purpose explosives, broke out last Thursday, spreading quickly and causing at least ten detonations. According to the emergency ministry, the ammunition depot reportedly housed more than 500 tons of trinitrotoluene (TNT).

The explosion took place not far from a major road connecting the provincial center of Taraz to Almaty, the country’s business hub and biggest city. The fire torched nearly 700 square meters, while the fragments scattered within a radius of up to two kilometers.

For safety reasons, the Kazakh authorities have evacuated nearly 1,200 residents from surrounding villages to the town of Taraz, some 30 kilometers from the explosion site. In addition, traffic and railway lines passing through the area have been closed.

Kazakhstan President Kassym-Jomart Tokayev declared August 29 a national day of mourning. The head of the country also expressed condolences to the victims’ families and ordered to investigate the accident.

“The military and rescuers who died there demonstrated true heroism and commitment,” read a message posted on Tokayev’s official Twitter account on Saturday. “They will always be remembered.”

Meanwhile, a commission has been set up to establish the fire’s cause, with arson being considered a potential trigger for the blaze.

“We do not exclude various reasons, these can be violations of the safety rules, a spontaneous combustion, a chemical reaction, an intentional fire, and sabotage,” Lenta.ru quoted Kazakh Defense Minister Nurlan Yermekbayev as saying at the press conference on Friday.

Kazakh Defense Minister Nurlan Yermekbayev expressed his readiness to step down in the wake of the massive blasts. President Tokayev accepted his resignation on Tuesday.

In 2019, four people were killed and dozens wounded in a similar accident in the Kazakh town of Arys in the adjacent Turkestan region. Due to blasts at a munitions depot, the local authorities were forced to evacuate the whole town of 44,000 people.