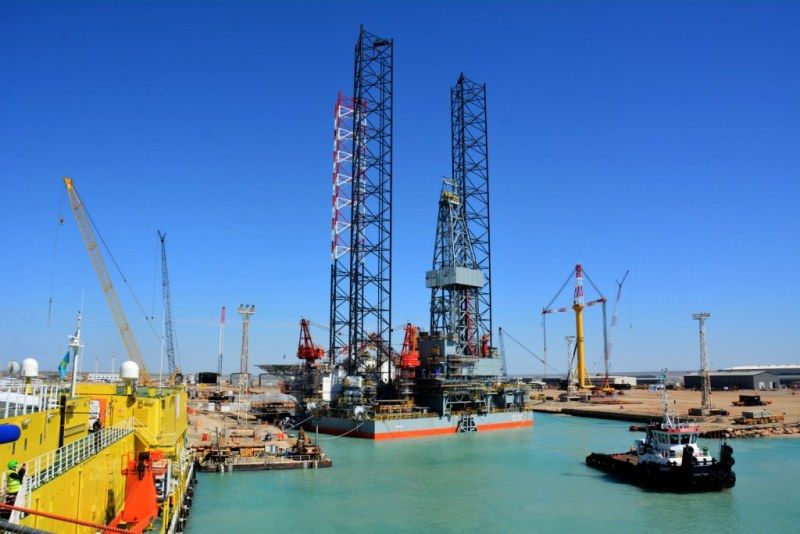 Launched in 2015, Sattee was initially designed to drill wells in Kazakhstan’s portion of the Caspian Sea. Weighing more than 10,000 tons, the drilling rig has a helipad and residential modules for up to 86 personnel to live and work comfortably and safely. / KazInform

Economic ties between Kazakhstan and Azerbaijan got a boost this week when energy officials met in Baku on Monday to sign a Memorandum of Understanding (MoU) that will see two state-owned energy companies, KazMunayGas (KMG) and the State Oil Company of the Azerbaijan Republic (SOCAR), team up to explore the Caspian Sea for oil and gas deposits.

The MoU also provides for the two sides to develop logistics and supply chains and help modernize sea-based equipment, such as a jack-up rig called Sattee. The KMG-owned oil rig is a type of mobile platform that consists of a buoyant hull fitted with movable legs, capable of raising the hull over the surface of the sea.

Launched in 2015, Sattee was initially designed to drill wells in Kazakhstan’s portion of the Caspian Sea. Weighing more than 10,000 tons, the drilling rig has a helipad and residential modules for up to 86 personnel to live and work comfortably and safely.

The Kazakhstani-made rig is expected to be used in joint projects with SOCAR in the Azerbaijani section of the Caspian. Azerbaijan already employs a few semi-submersible rigs of its own, named Istiglal, Dede Gorgud, and Heydar Aliyev – named after the country’s former president. The units can handle water depths between 500 to 900 meters. Kazakhstan’s Sattee could reach down into a depth of up to 6,000 meters in water that reaches between five and 80 meters deep.

Monday’s meeting in Baku also resulted in a MoU between SOCAR and Kazmortransflot, focusing on transportation of oil and gas. The memorandum is the first official document signed regarding energy after Kazakhstan’s top energy official, Kanat Bozumbayev, announced last year that Kazakhstan will be re-joining the Baku-Tbilisi-Ceyhan (BTC) pipeline.

Currently, Kazakhstan transports its oil to a terminal on the coast of the Black Sea, in Batumi, Georgia, via a multimodal route known as Aktau-Baku-Batumi. From Aktau, Kazakhstan to Baku, hydrocarbons are shipped across the Caspian Sea. There they are unloaded from tankers and sent inland by rail across Azerbaijan and through Georgia.

The oil and gas industries are the main economic pillars for both Baku and Astana, as Azerbaijan and Kazakhstan are flush with hydrocarbons. The two post-Soviet countries have maintained strong partnerships in the energy sector through close economic, technological and transportation-related initiatives.

Azerbaijan’s SOCAR, together with some of the world’s largest energy companies, participate in a large-scale project dubbed “Eurasia.” Launched in 2014, the project calls for joint drilling of an oil well at a depth of 9.3 miles. Kazakhstan is partnering with Azerbaijan to launch a plant for the production of liquefied natural gas that will be based in western Kazakhstan, as well as a joint petroleum engineering venture.