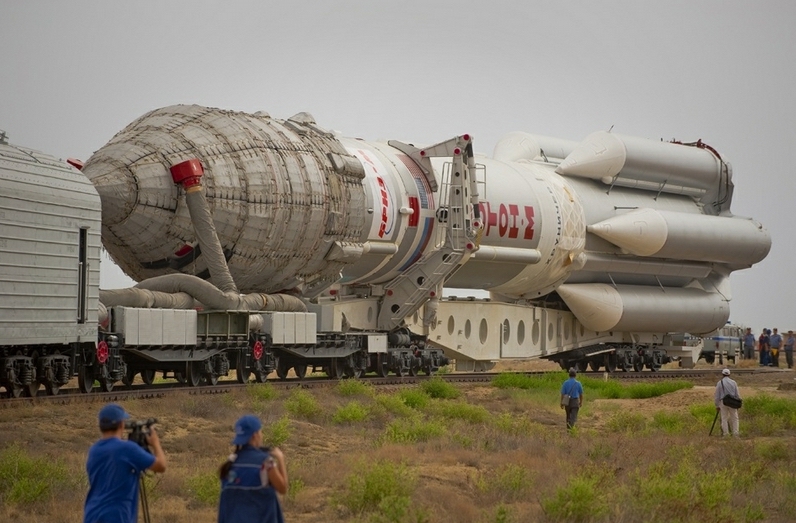 “Proton-M” rocket carrying KazSat-2 is being transported to the launching site in Baikonur, 2011. / Vox Populi

Kazakhstan is giving up on its plan to launch the KazSat-2R telecommunication satellite, the country’s ministry of digital development, innovation, and the aerospace industry confirmed last Friday.

The 40 billion tenge ($105 million) project will be terminated in favor of innovative solutions, such as next-generation satellite constellations, according to the ministry’s statement.

“This will save billions of tenge of budget funds,” reads the message.

KazSat-2R, first announced in 2017, was originally supposed to replace KazSat-2, the second Kazakh space satellite launched in 2011. Officials in Nur-Sultan planned to launch the new satellite into orbit in 2023 when the KazSat-2 would expire. Some companies from Russia, France, Italy, the United States, and Turkey announced their intent to join the project to design and develop the satellite for Central Asia’s wealthiest country.

Last April, the ministry of digital development, innovation, and the aerospace industry revealed that the order for the satellite will be placed with Ghalam, a joint venture established by France’s Airbus Defence and Space, Kazakhstan’s state-owned space company Gharysh Sapary and the ministry’s aerospace committee. Now, the country is giving up the project.

As the largest, economically strongest, and wealthiest country in the region, Kazakhstan was the first of the five Central Asian republics to launch a satellite.

Kazakhstan currently owns the space communication system, consisting of KazSat-2 ($115 million) and KazSat-3 ($120 million) satellites as well as ground control systems. In the period between 2011-2018, the system helped to save $106 million by reducing the use of foreign satellites.

The very first Kazakhstani satellite — KazSat-1 — went into orbit for a 12-year mission after being transported to space via the Russian-made Proton-K launcher in 2006. Partial control of the satellite was lost in July 2008 and completely in October 2008. The telecommunications satellite, valued at $100 million, was equipped with 12 Ku-band transponders.

The launch of the second and third telecommunication satellites, named KazSat-2 and KazSat-3, took place in 2011 and 2014, respectively, from the Baikonur Cosmodrome, also via Russian-made Proton launch vehicles. Both are aimed at broadening the scope of information services provided to the region, including mobile and internet connections, and help satisfy Kazakhstan’s need for broadband systems.

With a lifetime of 12 years, KazSat-2 features 16 Ku-band transponders for fixed communications and TV-transmissions and is intended for telecast, fixed satellite communication, and data transmission for Kazakhstan and Central Asia. KazSat-2 was originally to supplement the first satellite but then replaced KazSat-1 due to its complete loss. KazSat-3 has a lifetime of 15 years and provides Direct-to-Home television services, broadband services, and high-speed voice and data transmission services through Very Small Aperture Terminal (VSAT) technologies for customers in Kazakhstan, Turkmenistan, Uzbekistan, Kyrgyzstan, and part of Russia.