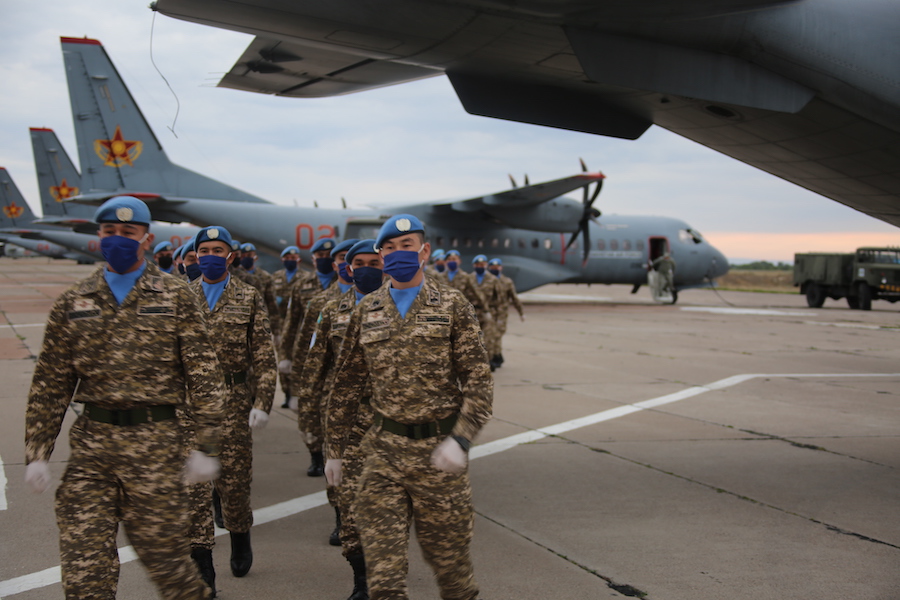 Around 120 servicemen, on rotational deployment, had been engaged in patrolling the UN-drawn border between Israel and Lebanon, as part of the United Nations Interim Force (UNIFIL) and alongside an Indian battalion since last November. / Kazakhstan Defense Ministry

A small contingent of Kazakh troops have arrived from Lebanon following the successful completion of the United Nations peacekeeping mission, the Kazakh defense ministry said on Tuesday.

Kazakh military commanders and personnel welcomed the peacekeepers who returned on military aircraft.

“The accomplishment of the peacekeeping mission by the contingent of the Kazakhstan Armed Forces is of great importance for strengthening the credibility of our country in the global community,” said Bauyrzhan Artykov, First Deputy Commander of the Airborne Assault Forces, according to a statement published on the defense ministry’s website.

“You have shown a high level of combat training and performed your duty with dignity,” he added.

Around 120 servicemen, on rotational deployment, had been engaged in patrolling the UN-drawn border between Israel and Lebanon, as part of the United Nations Interim Force (UNIFIL) and alongside an Indian battalion since last November. The Kazakh servicemen helped to man checkpoints, guard military bases and patrol the area.

UNIFIL is deployed in southern Lebanon in accordance with UN Security Council Resolution 1701, which ended the 2006 Lebanon War – a 34-day military conflict between Hezbollah paramilitary forces and Israeli Defense Forces. Together with the Lebanese army, roughly 11,000 military servicemen from 43 countries patrol what is more than a 79-kilometer (49-mile) border between Lebanon and Israel, known as the Blue Line.

The first rotational unit of Kazakh troops arrived in Lebanon in October 2018 and left in May of last year. A second unit served since then until November 2019.

The third unit was scheduled to stay in Lebanon until May 2020, but did not return until early August.

“During their mission period, there was a complication of the military, political and economic situation in the host country along with the rapid spread of coronavirus infections in the world, but our servicemen coped with the task,” the defense ministry said.

The Lebanese army and UNIFIL have been on alert since last September, after Israel and Hezbollah – an anti-Israel militant group based in Lebanon – exchanged fire along the Lebanese border. Later, Israeli military forces crossed the fence along the border twice — on April 3 and April 14. On July 27, five Hezbollah fighters reportedly crossed into the disputed Shebaa Farms area. The Israeli military said that its troops were able to repel the fighters.

Kazakhstan has steadily played the role of peacekeeper and peace broker since its independence in 1991, but for Kazakhstanis the UNIFIL mission is the first major peacekeeping activity led by the UN and the second major mission the military has undertaken since the NATO-led operation in Iraq in the early 2000s.