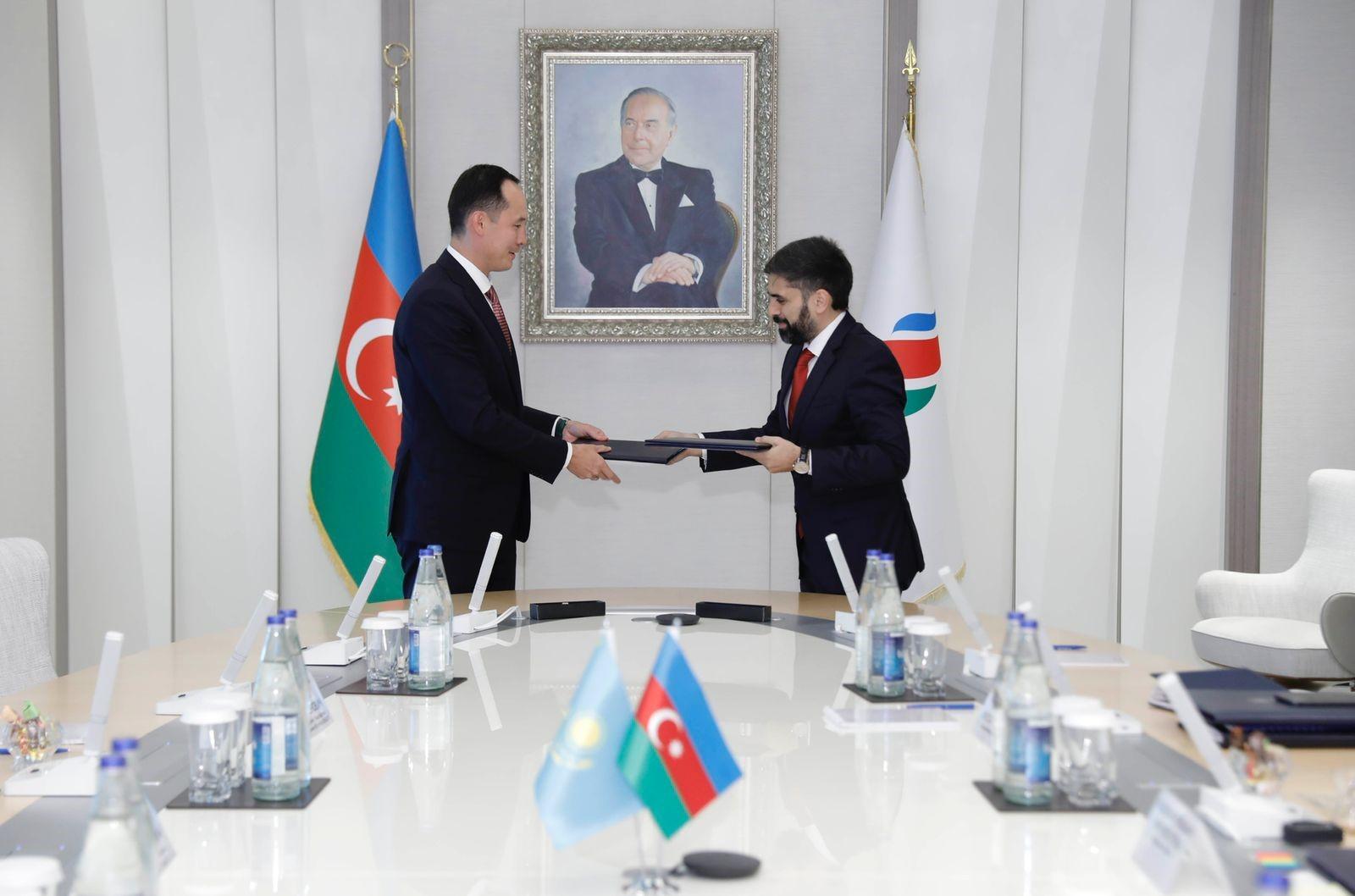 President of the State Oil Company of the Republic of Azerbaijan (SOCAR) Rovshan Najaf and Sanzhar Zharkeshov, the Chairman of the Management Board of Kazakhstan’s State Company QazaqGaz, signed a Memorandum of Understanding between the companies, on August 24, 2022. / Report.Az

Kazakhstan’s gas giant QazaqGaz and Azerbaijan’s state oil company SOCAR have signed a memorandum of understanding on the implementation of joint gas projects.

According to a report by Baku-based Report news agency, the document envisages the exploration and development of hydrocarbon deposits in Kazakhstan, the development of gas and chemical areas, the modernization of gas transportation, the introduction of innovative technologies in this sector, and the study of cooperation opportunities in other important areas.

The memorandum will also serve to develop close commercial relations between the parties and increase the volume of bilateral investment and technological exchange.

A deputy chairman of the economy and finance department at Kazakhstan’s national oil company KazMunayGas, Dauren Karabayev, said that the company is exploring various options for possible alternative routes for oil exports, including the routes passing through Azerbaijan.

“The negotiations with the Azerbaijani side on the possible transportation of Kazakh oil are going on at various levels, including the state level and the level of the national companies. The details have yet to be coordinated. We will report in more detail upon reaching agreements with the Azerbaijani side. Azerbaijan has two oil pipelines — Baku-Tbilisi-Ceyhan (BTC) and Baku-Supsa — that can potentially be used to transport Kazakh oil,” he said.

He also said Kazakhstan had “enough alternative routes” comparable in volume to the Caspian Pipeline Consortium (CPC), an oil pipeline system currently used to transport Kazakh oil to an export terminal at the Russian Black Sea port of Novorossiysk.

Meanwhile, Kazakh Energy Minister Bolat Akchulakov said on August 25 that his ministry does not intend to sign an agreement on oil supplies through Azerbaijani pipelines in the near future, but such a possibility is being discussed.

On August 12, Reuters revealed that Kazakhstan is expected to supply and sell some of its oil bypassing Russia — through Azerbaijan’s biggest oil pipeline BTC from September. According to the report, KazMunayGas is in advanced discussions with the trading arm of Azerbaijan’s SOCAR to allow 1.5 million tons of Kazakh crude to be annually sold through the Azerbaijani pipeline that delivers oil to Türkiye’s Mediterranean port of Ceyhan. The final contract is due to be signed at the end of August, according to Reuters.

In 2023, another 3.5 million tons of Kazakh crude could start flowing through another Azerbaijani pipeline to Georgia’s Black Sea port of Supsa. Combined with BTC flows, the volume would equate to just over 100,000 barrels per day (bpd). Last month, BP Azerbaijan said it would redirect flows away from the Baku-Supsa pipeline to the larger BTC pipe.

The new route means Kazakhstan will have to rely on a fleet of small tankers to take its oil across the Caspian Sea to Baku from its port at Aktau, which has limited spare capacity.

However, Kazakhstan’s energy minister denied that his country is planning to use an Azerbaijani oil pipeline bypassing Russia.

Kazakh oil exports account for over 1 percent of world supplies or roughly 1.4 million bpd. For 20 years, Kazakh oil has been shipped through the CPC pipeline to Russia’s Novorossiysk, which provides access to the global market. Kazakhstan exports more than two-thirds of its oil via the CPC pipeline.

On July 5, a Russian court banned Kazakh oil exports via Novorossiysk for 30 days, marking the third time that Russia restricted or threatened to restrict the operations of the CPC since March. However, an appeals court overturned the ban on July 11. Around 80 percent of Kazakh oil exports are transported to Europe through the CPC.