Kassym-Jomart Tokayev Wins By A Landslide In Kazakhstan Presidential Election 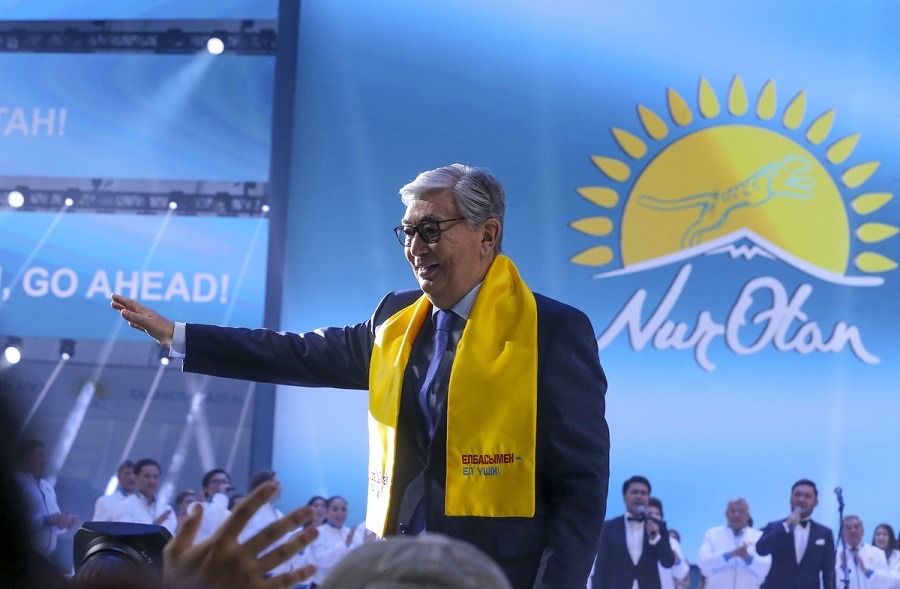 Tokayev, at age 65, had 70.76 percent of the vote, according to exit polls released Sunday. / AP/TASS

Tokayev, at age 65, won 70.76 percent of the vote according to exit polls released Sunday. Kosanov, 55 and a journalist and political activist, stood at 16 percent. Officials from Kazakhstan’s election commission said voter turnout was a record 77.4 percent, with almost nine million having voted out of a population of over 18.7 million.

“This suggests that the level of political culture in Kazakhstan has seriously increased. We have a lot of work ahead,” said Tokayev in a post-election address.

Seven candidates appeared on Sunday’s ballot – the first presidential election in Kazakhstan since the country experienced a change in leadership since its independence after the collapse of the Soviet Union in 1991. Former President Nursultan Nazarbayev had served in the role until his unexpected resignation on March 20.

Daniya Espaeva from the Ak Zhol Democratic Party, the only woman to stand in the election, won 5.2 percent of the vote. The longtime leader of the Kazakh Communist People’s Party, Zhambyl Ahmetbekov, received 1.82 percent, while Toleutai Rakhimbekov from the Kazakhstan Social Democratic Party Auyl had 3.2 percent. Sadybek Tugel, from the Uly Dala Kyrandary Public Association, and Amangeldy Taspikhov from the Kazakh Federation of Trade Unions, had received 0.92 percent and 2.07 percent, respectively.

Tokayev, who previously served as Kazakhstan’s foreign minister, prime minister and chairman of the senate, has already pledged to follow in the footsteps of his predecessor, who some say still control the levers of power in the Caspian country.

Since 1991, Nazarbayev was re-elected as president four times: in 1999, 2005, 2011 and again in 2015. In 1995, Kazakhstanis took part in a referendum to ratify his proposal to skip the scheduled 1996 presidential election and allow him to remain in office until 2000. Seven years later, parliament passed legislation to remove term limits.

“In our country, as in all democratic states, power should be shifted and new generations should come with new thoughts,” former president Nazarbayev said on Sunday, explaining his decision earlier this year to step down, according to reports by Kapital.Kz. “They will lead Kazakhstan to new heights. My decision to resign was received positively in the world.”

The sudden resignation of Nazarbayev led Tokayev to the presidency the following day, which was expected to last until general elections scheduled for 2020. Tokayev, however, had shortly thereafter called for an early election, arguing for the need to ensure what he has described as “social and political consent” without too much time passing by.

A general presidential election in Kazakhstan usually takes place once every five years, on the first Sunday of December. According to law, it cannot coincide with the elections of a new parliament. A snap presidential election can be set by a current head of state, which must be held within two months.

According to Kazakhstani legislation, no person shall be elected to the office of the president more than twice. That restriction, however, did not apply to Nazarbayev, who did not take part in the recent election.

Nazarbayev will continue as leader of the ruling Nur Otan party, which dominates parliament, and retain his lifelong position as the chairman of the Security Council. In addition, he will retain the title “Leader of the Nation,” which was bestowed upon him in 2010.

“Our first president is a sleeping guarantor of stability, which can intervene if a catastrophic situation occurs. In general, the figure of Nazarbayev helps to avoid any intra-elite clashes in the country,” said Daniyar Ashimbayev, a political analyst from Kazakhstan, according to reports by Gazeta.Ru.