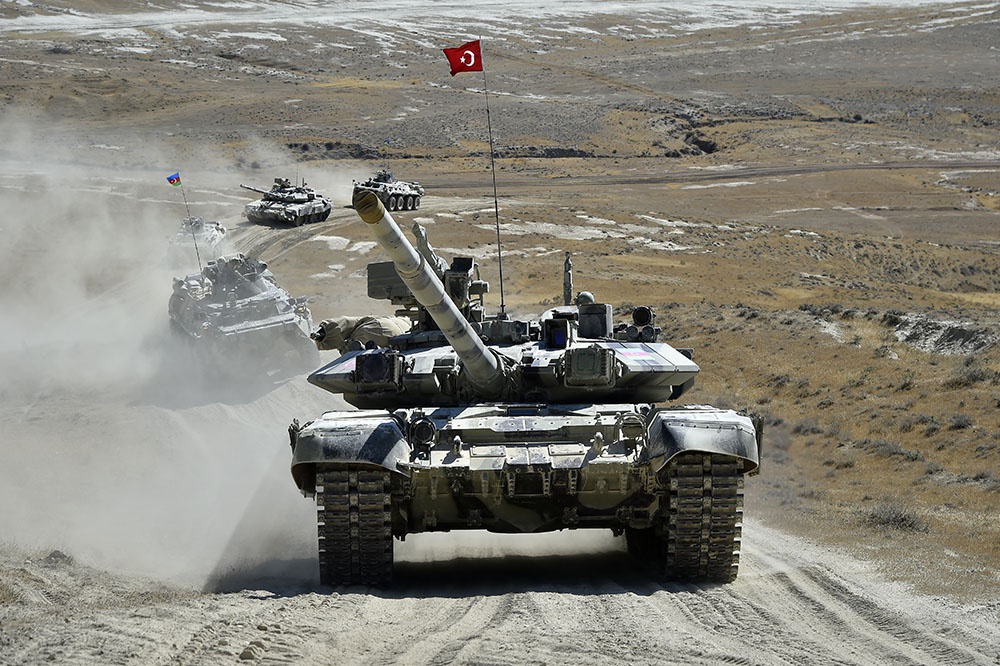 Massive joint military drills of Azerbaijani and Turkish armed forces, which kicked off on July 29, continue in full swing in various parts of Azerbaijan with both air and land forces participating.

"Another stage of the Azerbaijani-Turkish Live-Fire Joint Large-Scale Tactical Exercises held in our country in accordance with the Agreement on Military Cooperation was conducted," the Defense Ministry of Azerbaijan reported on August 1.

"According to the plan, the efficiency and coordination of tasks, the organization of interoperability, the logistic support in the course of combat operations, as well as the effectiveness of military personnel activity and the use of weapons and military equipment were checked."

The joint air combat drills involving the jet and helicopter units of the two countries are set to continue in the coming week in Azerbaijan's capital Baku, the second-largest city of Ganja, as well as the southwestern Nakhchivan Autonomous Republic and the Yevlakh and Kurdamir districts in the central part of the country. The artillery, armored vehicles and mortar units are expected to complete assigned tasks, including the destruction of mock targets in the firing fields in Baku and Nakhchivan until August 5. The Turkish Air Force dispatched F-16 fighter jets, as well as Atak attack helicopters, to Azerbaijan for participation in the drills.

On August 1, the Combined Arms Army, the armed forces in Nakhchivan exclave of Azerbaijan located in the country’s southwest corner, surrounded by Armenia, Iran, and Turkey, and the Armed Forces of Turkey shifted to a state of full combat readiness and were relocated to the exercise areas as part of the drills, according to Azerbaijan's Defense Ministry.

The large-scale training of the two neighboring countries follows four days of deadly border skirmishes between Armenian and Azerbaijani troops which broke out on July 12. The Armenian military's artillery fire on Azerbaijani positions stationed in the Tovuz region on the border with Armenia triggered the bloody clashes. The armed forces of Azerbaijan lost 12 servicemen, including one general, and one civilian during the skirmish. Although Armenia officially reported four deaths in its army, the country's civil society slammed authorities for deliberately hiding the true death toll, which is believed to be more than 30.

Meanwhile, the government of Turkey voiced strong support for and solidarity with Azerbaijan in protecting its territorial integrity. The Foreign and Defense Ministries in Ankara announced that Turkey will not spare any efforts to take Azerbaijan's side in repelling any attack on the country's borders.

"Turkey will not hesitate to stand against any attack on the soils of Azerbaijan. Mobilizing all of our political, diplomatic and social connections in the region and around the world in this regard is our duty," President Recep Tayyip Erdogan of Turkey said, accusing Armenia of stalling negotiations to resolve the Nagorno-Karabakh conflict and creating new conflict zones in the region.

Peace and stability in South Caucasus remain shaky due to several conflict zones, including the Armenia-Azerbaijan Nagorno-Karabakh conflict, which is over 30 years old. Armenia and Azerbaijan have been at odds since the late 1980s with the dramatic rise in anti-Azerbaijan sentiments in Armenia, as well as Armenia's illegal claims to Azerbaijan's historic Nagorno-Karabakh region, where partial Armenian population was living side by side indigenous Azerbaijanis.

These sentiments transitioned into a full-blown military campaign in 1991, when Armenia launched an attack on Azerbaijani lands. The bloody war lasted until a ceasefire was reached in 1994. Armenian forces killed 30,000 Azerbaijanis and displaced one million throughout the hostilities, while forcibly occupying Azerbaijan's Nagorno-Karabakh region and seven districts around it.

The lands that comprise 20 percent of Azerbaijan's internationally-recognized territory remain under Armenia's occupation to date. Yerevan continues to defy four UN Security Council resolutions calling for the withdrawal of its forces from occupied lands and the return of internally displaced Azerbaijanis to their native land.