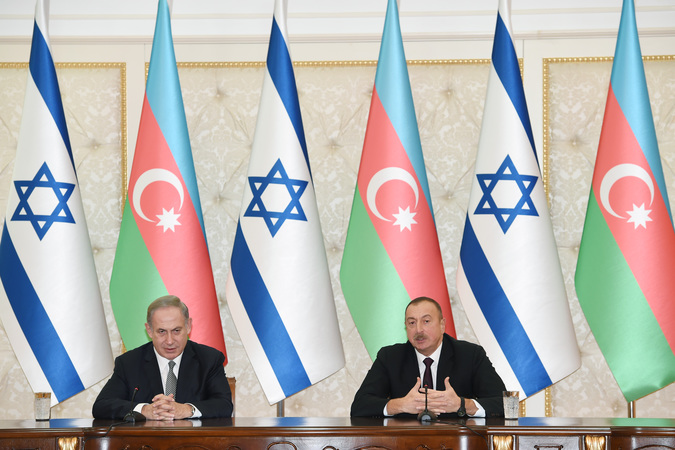 Following a one-on-one meeting between President Ilham Aliyev and Prime Minister Benjamin Netanyahu, the document signing ceremony was held, attended by state officials from both sides. Azerbaijan and Israel, long-time strategic allies, strengthened their already firm cooperation with the signing of documents regarding standardization, conformity assessment and metrology, as well as environment, agriculture and taxes.

In a joint press-conference held following the ceremony, President Aliyev welcomed Mr. Netanyahu on his second trip to Azerbaijan that

President Aliyev drew attention to the multi-faceted cooperation between Azerbaijan and Israel, which has potential for further expansion and growth. An additional case in point is the “good trade turnover” of the two countries that is mainly due to oil supplies from Azerbaijan to Israel, according to President Aliyev.

“Also we actively cooperate in the area of defense industries and this cooperation lasts already for many years. I’ll just bring you one figure to illustrate how broad this cooperation is. So far the contracts between Azerbaijani and Israeli companies with respect to purchasing defense equipment has been close to five billion dollars. More precisely, 4,850,000,000 dollars. The biggest part of these contracts has already been executed and still we continue to work on that. And we are very satisfied with the level of this cooperation.”

President Aliyev stated also the great potential in tourism and education fields between Azerbaijan and Israel.

Referring to the strong relations between Azeris and Jews and the unique tolerance of Azeris toward Jews living in Azerbaijan, President Aliyev said,

“Azerbaijan is Jews’ home, they feel themselves at home.”

In his turn, Prime Minister Netanyahu, hailed close ties with Azerbaijan, the post-Soviet nation on the Caspian coast.

Addressing a meeting with Jewish community members in Azerbaijan’s capitol Baku, Prime Minister Netanyahu called Azeri-Jews ties "very close," adding "this will be even better after this visit,” according to the Associated Press.

Netanyahu signaled an opening of a new chapter in Azerbaijan-Israel energy cooperation as he expressed Israel’s desire to diversify this cooperation with Baku with gas deliveries from Azerbaijan in addition to oil supply.

“Israel could receive gas shipped from Azerbaijan across Turkey through the Trans-Anatolian Natural Gas Pipeline (TANAP).. Energy is among the fields in which we are closely cooperating.”

Premier Netanyahu’s visit wrapped up in a joint working dinner, where the talks regarding Azerbaijan-Israel relations continued.