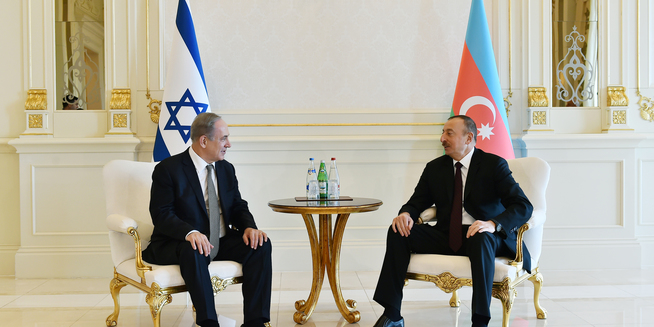 During a top-level meeting, Mr. Netanyahu and Azerbaijan President Ilham Aliyev, discussed issues related to the development of ties between the two countries.

The primary goal of the visit was to strengthen diplomatic, security and economic relations with Azerbaijan, “a significant country in Islamic world,” Mr. Netanyahu stated in an official statement released prior to visit.

The premier is also expected to meet with Education Minister Mikayil Jabbarov, other state officials, as well as pay a visit to Ohr Avner Chabad Jewish Day School in Baku, where he will meet with local Jewish community members.

This is the Israeli premier’s second official visit to Azerbaijan, a country located at the crossroads of Asia, Europe and Middle East. The first visit was in 1997.

“I made the first visit almost two decades ago and I met with the father of the current leader. There is continuity here as well as an important breakthrough."

Following his visit to Azerbaijan, the premier will fly to Kazakhstan on his first ever official trip to the Central Asian country.