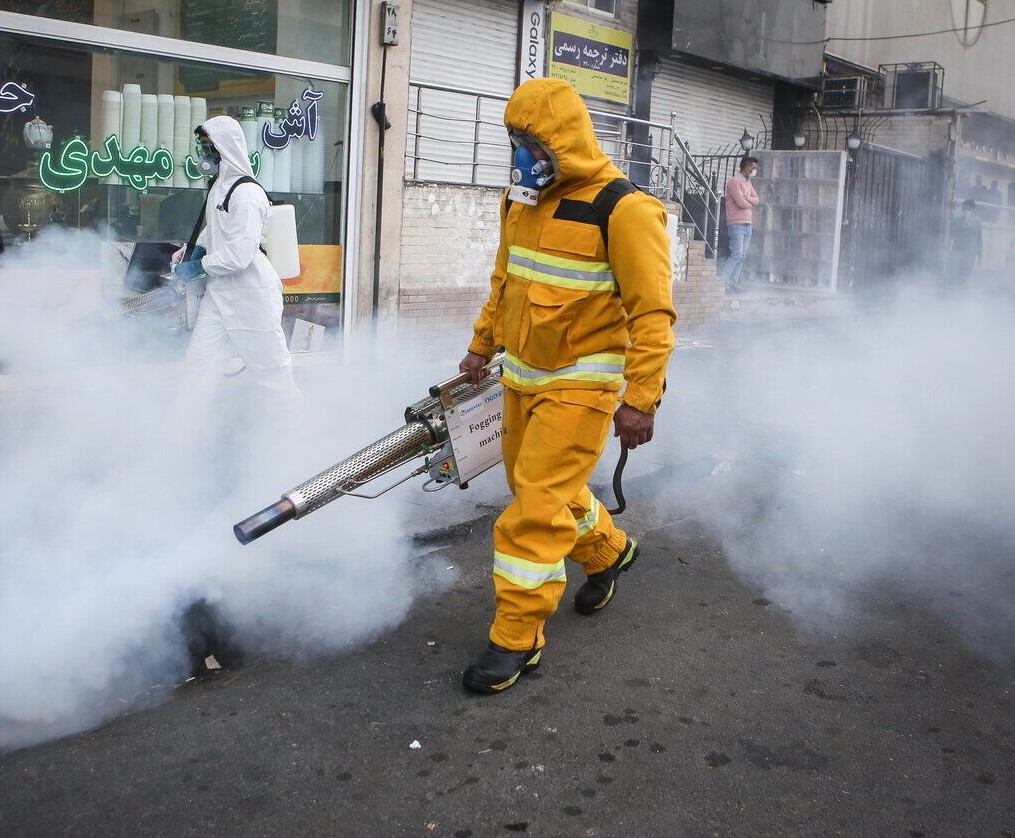 A group of firefighters disinfected various areas of the Iranian capital city to fight the outbreak of the coronavirus on March 14, 2020. / IRNA news agency

Iran’s health minister Saeed Namaki has asked the country's government for €250 million or $274 million in direct assistance for treating COVID-19 patients in the country.

“We are in an urgent need for €250 million of foreign exchange financial resources to continue treating COVID-19 patients in the country, to supply required medical equipment including face masks and others for about 20,000 hospital beds and medical staff,” Namaki, who also serves as the head of the National Headquarters for Fighting Coronavirus, wrote in a letter to the President Hassan Rouhani on March 17, according to a report by Tasnim.

The Iranian government officials blame the US sanctions that have been re-imposed on the country, saying that they seriously hamper the efforts in fighting against the coronavirus pandemic.

“US officials have banned the export of medicines and medical supplies to the Islamic Republic of Iran in violation of the international rules and regulations of human rights,” said Shahbaz Hassnpour Biglari, a member of the Iranian Parliament, on March 16.

He further added that “the US prevention of the delivery of medicines to Iran is a crime against humanity and the US heinous act should be followed up in the international courts”.

China and Russia have already called on the US to immediately lift sanctions on Iran as the country struggles to deal with the rapidly spreading coronavirus.

“We urge the US to immediately lift unilateral sanctions on Iran,” said Geng Shuang, a spokesperson for Chinese foreign ministry, according to a report by Middle East Eye.

“Continued sanctions are against humanitarianism and hamper Iran’s epidemic response and delivery of humanitarian aid,” he added.

The Russian foreign ministry made a similar announcement, calling the sanctions “anti-human.”

“Illegal unilateral US sanctions, imposed since May 2018 as part of the ‘maximum pressure’ campaign, are a powerful obstacle to the effective fight against the infection,” the ministry said.

The Iranian government has repeatedly announced that the country has lost about $200 billion in foreign-exchange income and investment since US President Donald Trump re-imposed sanctions against Tehran.

Over ten countries have already sent aid consignment to Iran to combat coronavirus, as it is the third-worst affected country by the COVID-19 pandemic after China and Italy.

A number of countries including China, Turkey, the UAE, Kuwait, Uzbekistan, Germany, France, Japan, the UK, Japan, Qatar, Azerbaijan, and Russia as well as international bodies such as UNICEF and WHO have sent their aid packages to Iran to combat coronavirus.

According to the latest report of the Iranian Health Ministry, the death toll has risen to 1284, and the number of confirmed cases has climbed to 18,407 in the country. At the same time, 5,979 coronavirus patients have recovered and been discharged from hospitals as of March 19.

On Tuesday, Iran’s courts temporarily released around 85,000 prisoners, including political prisoners, from its jails to combat the spread of the disease.