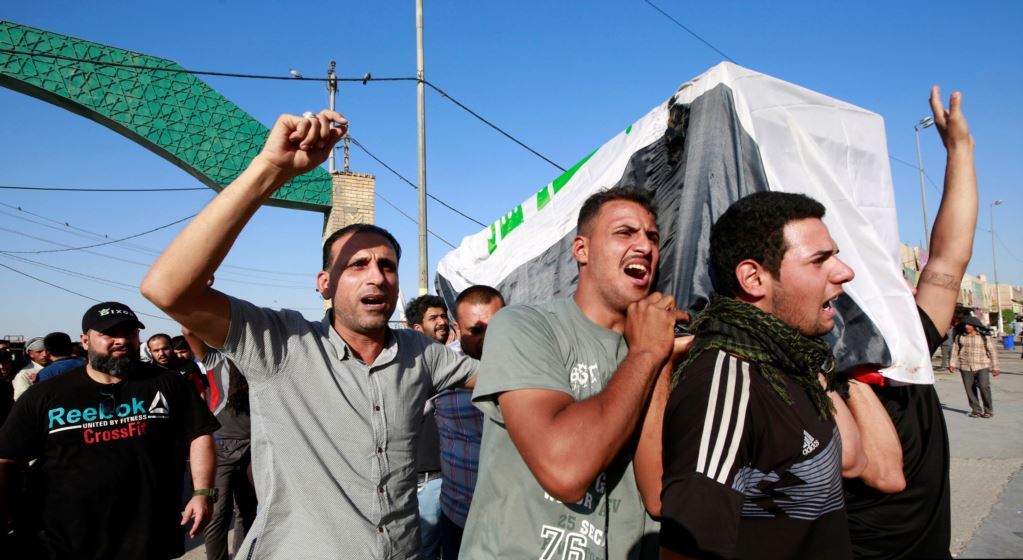 Iraqi men carry the coffin of a demonstrator, who was killed during anti-government protests, at a funeral in Najaf, Iraq October 5, 2019. / Reuters

Iran’s Supreme Leader Ali Khamenei has said recent protests in Iraq are the work of “enemies,” and accused them of attempting to sow discord between Iran and Iraq.

“Iran and Iraq are two nations whose hearts and souls are tied together through faith in God and love for Imam Hussain and the progeny of the Prophet,” Khamenei said, referring to a revered figure in Shia Islam, which is the dominant Islamic branch in both countries.

“This bond will grow stronger day by day. Enemies seek to sow discord but they’ve failed & their conspiracy won’t be effective,” read a message posted to Khamenei’s official Twitter account on October 6.

Khamenei’s note was not explicit with regards to who “the enemy” is, but years of speeches and sermons by him would indicate he is referring to the West in general, and the United States specifically, as well as Iran’s regional archfoes Saudi Arabia and Israel.

Iranian media has accused the U.S., Saudi Arabia and Israel for organizing recent protests in Iraq as an attempt to weaken ties between the two Middle Eastern neighbors, Iran and Iraq, which fought a bloody war throughout the 1980s when Saddam Hussein was in power in Baghdad.

Widespread protest against government corruption and inefficiency and high unemployment erupted in major Iraqi cities last week. According to Iraqi interior ministry spokesman Saad Maan, 104 people, including eight members of the security forces, were killed and more than 6,100 wounded, including more than 1,200 security personnel.

The Iraqi government, in turn, announced a series of reforms to create jobs, boost social welfare and oust corrupt officials, but have also accused "saboteurs" of infiltrating the protests. Meanwhile, some Iranian officials have accused the United States and Israel of stoking the unrest.

Protesters, however, have been expressing their concern over Iran’s influence in the country – a concern that dates back to the days after a U.S.-led military coalition toppled Saddam in 2003. Of particular concern amongst Iraqis is the alleged intervention of Iran in Iraqi elections and parliamentary politics. During the unrest, protesters have chanted “Baghdad should be free, Iran should leave,” according to Radio Farda.

Faleh al-Fayyadh, who heads Iraq's powerful Hashed al-Shaabi militia, told reporters that the force was ready to implement government orders to prevent "a coup d'etat or a rebellion" after protests.

"We know who stands behind these protests. The plan to bring down the regime has failed," he said.

On Sunday, the deputy head of political studies at Iran’s foreign ministry, Salim Khatibzadeh, said the U.S. is striving to sow seeds of discord between Iran and Iraq, adding that, “social, political, religious and historical ties between Iran and Iraq are inseparable,” Iranian Students’ News Agency reported.

In his remarks, Khatibzadeh also termed the reopening of Bukamal border crossing in Iraq, which gives Iran access to the Mediterranean Sea via Iraq and Syria, a “very strategic” measure.

The protests erupted on the eve of Arba’een, a Shia Muslim religious observance that commemorates the martyrdom of the third Shia Imam, Hussein ibn Ali, which will be held on October 19. Millions of Shiite Muslims from Iraq, Iran and other countries are expected to undertake a pilgrimage to the holy cities of Najaf and Karbala. The annual event, which usually sees more than 20 million participants in Iraq, attracting pilgrims from all over the world, including neighboring Iran, is often seen as a symbol of unity between otherwise historical rivals.

The Iranian army has employed military drones along the border with Iraq to ensure the security of Iranian pilgrims visiting for Arbaeen march, Habibollah Sayyari, the deputy army chief for coordination affairs said.

“The army is closely watching all [Iran-Iraq] borders through different methods to ensure the borders’ security,” Sayyari said.