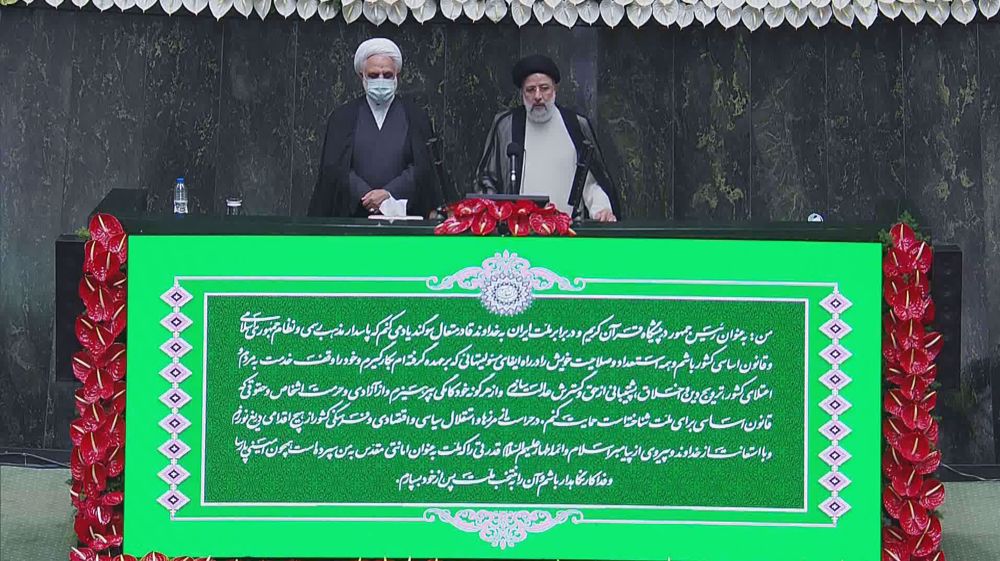 Iran’s President Ebrahim Raisi (right) takes the oath of office through an official ceremony attended by the head of the Judiciary Ghomalhossein Mohseni Ejei (left) at the Iranian parliament, on August 5, 2021. / president.ir

Ebrahim Raisi has officially been sworn into office as the eighth president of the Islamic Republic during his inauguration ceremony at the Iranian parliament.

“In the presence of the holy Koran and before the nation, I swear to the omnipotent God to safeguard the official religion of the country and the Islamic Republic as well as the country’s constitution,” he said while addressing the parliament and foreign dignitaries in the ceremony on August 5.

"I swear to dedicate myself to serving the people and the country, promoting religion and morality, supporting the right and spreading justice, and refraining from any authoritarianism, and supporting the freedom and dignity of individuals and the rights that the Constitution recognizes for the nation."

Raisi was officially endorsed as Iran's next president by Supreme Leader Ali Khamenei at a ceremony in Tehran on August 3. Addressing the ceremony, Raisi said that “the new government seeks to remove the sanction but will not let economic conditions rely on financial embargos," adding that "we will not let Iranian's livelihood be dependent on the enemies' will".

"The situation we are in, such as 44% inflation, 680% liquidity growth in these years, government debts that have tripled in the past six years, many problems that have affected people's lives, and the budget deficit of 450,000 billion rials [about 11 billion dollars], makes the situation improper for Iranians," he added.

Raisi’s administration is the 13th government that will run the country since the 1979 revolution. The former head of the country’s judiciary and hardline cleric won Iran’s presidential election on June 18, with a landslide victory and 62.17% of the vote. He succeed outgoing reformist President Hassan Rouhani.

The conservative president, 61, is considered to be among the possible successors of Khamenei. Before becoming Chief Justice in 2019, Raisi served as Iran's Prosecutor General (2014–2016), Deputy Chief Justice (2004–2014), Prosecutor and Deputy Prosecutor of Tehran in the 1980s and 1990s. He is also a member of the Assembly of Experts, responsible for appointing and dismissing the Supreme Leader.

During his presidential campaign, Raisi promised to fight corruption, reduce unemployment, revive the country’s economy crushed by US sanctions, return to the 2015 nuclear deal, and curb the spread of Covid-19.