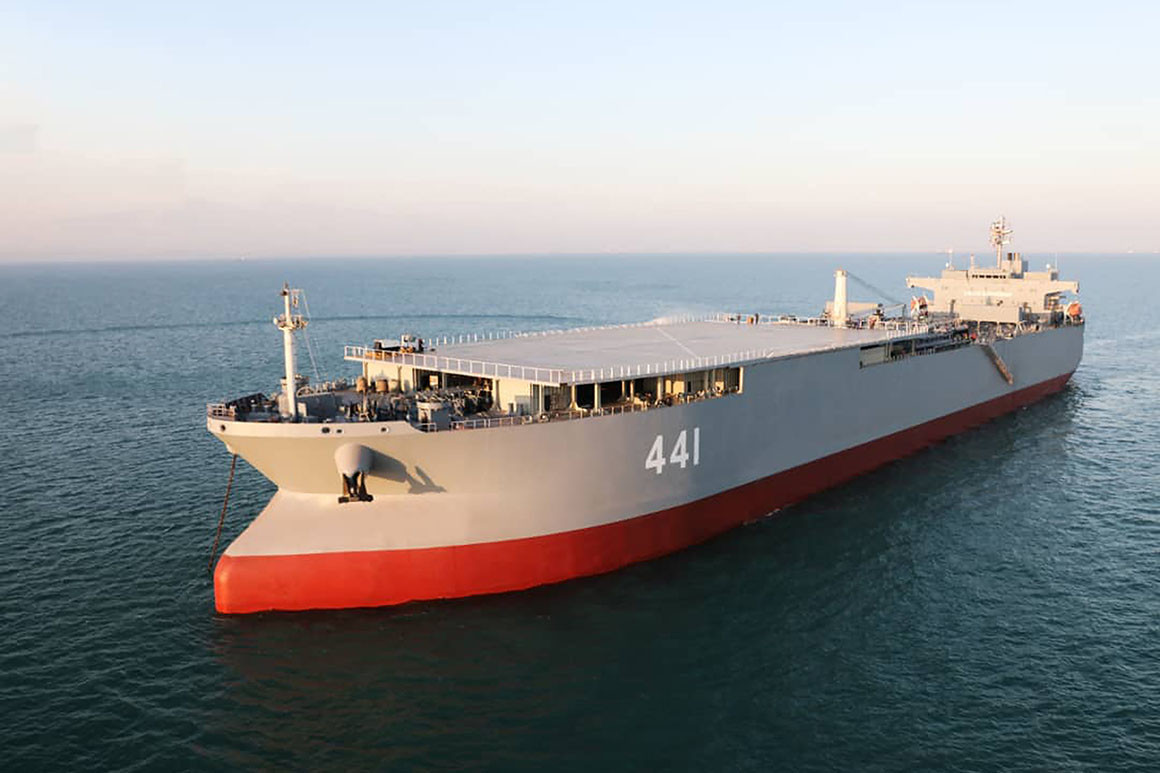 The Iranian-made warship, Makran, can carry 100,000 tons of fuel and fresh water and voyage for 1,000 days without making a port call. / AP

Two Iranian warships have entered the Atlantic Ocean for the first time without mooring at any country's port, a senior Iranian military official has revealed.

“The 77th strategic fleet of the Navy, consisting of the Sahand destroyer and the Makran ship, is present in the Atlantic Ocean for the first time to demonstrate the capabilities of the Islamic Republic of Iran in the maritime sphere,” Rear Admiral Habibollah Sayyari, the Deputy Chief of Iran’s Army for coordination issues, told reporters on June 10.

He added that the naval fleet “had left Iran for the Atlantic Ocean for the first time without mooring in other countries’ ports,” adding that “it is the absolute right of the Navy to have a presence in international waters.”

The vessels left the Bandar Abbas port in the Persian Gulf on May 10 and made their way around Africa, traveling a total of 6,000 nautical miles (about 12,000 kilometers) and marking Iran’s longest naval mission to the North Atlantic.

On May 29, the US-based Politico reported that the US intelligence indicated that the two Iranian warships were carrying arms that were bound for Caracas, Venezuela. However, details on the types of weapons involved have not been disclosed.

In response to the report by Politico, Iranian Foreign Ministry Spokesman Saeed Khatibzadeh warned the US against taking any action toward two Iranian naval vessels.

“The Islamic Republic of Iran, like any other country, can exercise its rights under international law to sail in international waters. No country can bring that to an end,” Khatibzadeh said.

Iranian government spokesman Ali Rabei said on June 1 that Iran and Venezuela “could extend their ties with the nations of the world in various spheres based on the law and international conventions and widen those relations in all aspects of the economy, politics, culture, and military.”

In August 2020, the US seized four oil tankers with Iranian petroleum aboard bound for Venezuela, as Iran has been dispatching fuel to the Latin American country and circumventing US sanctions imposed on both countries.

The White House has been pressuring Venezuela and Cuba over diplomatic channels not to allow the vessels to dock in their countries. The Biden administration also called other governments in the region to ensure that Iranian ships will be turned away.