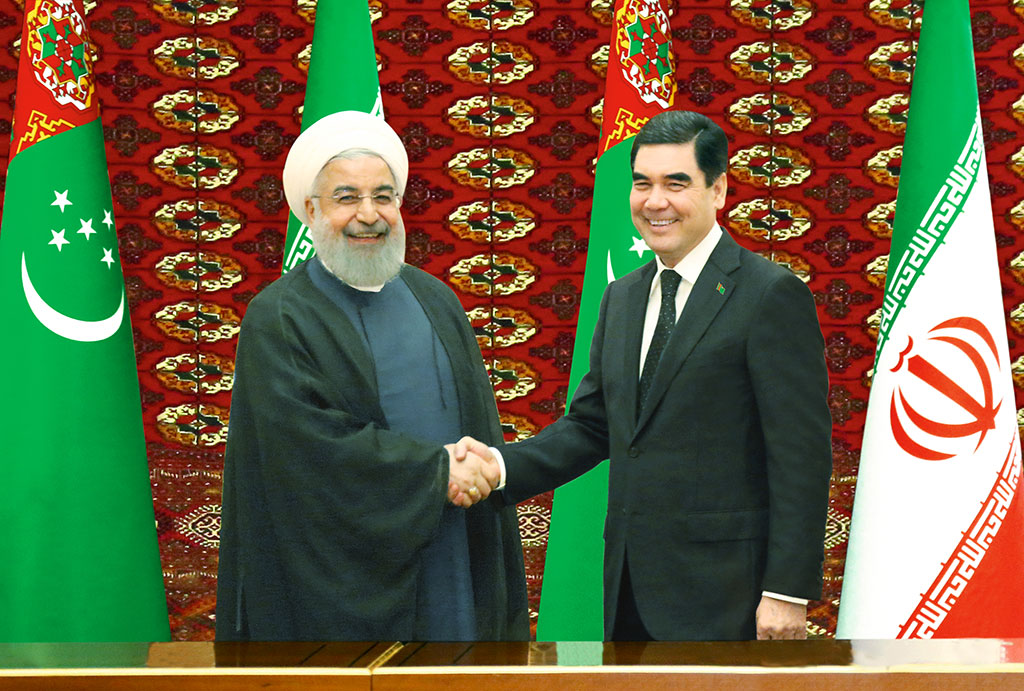 Iranian President Hassan Rouhani, who is in Ashgabat for a two-day visit, and his Turkmen counterpart, Gurbanguly Berdimuhamedow on March 27, 2018 / Turkmenistan Today

The Iranian and Turkmenistani presidents signed 13 Memorandums of Understanding (MoUs) on Tuesday, ranging from projects focused on sports and cultural ties, trade, industry, agriculture and academics.

Iran’s President Hassan Rouhani was in Ashgabat this week on a two-day visit, during which time he met with his Turkmenistani counterpart, President Gurbanguly Berdimuhamedow, according to reports from Mehr news agency.

“The beginning of the executive operation of the third line of electricity transfer from Tehran to Turkmenistan, new cooperation on Caspian Sea oil and gas, and rendering facilities to boost transportation between the two countries can serve as a new step to help economic relations between Iran and Turkmenistan,” Rouhani said during a meeting between high-ranking Iranian and Turkmenistani officials.

Rouhani is reported to have said that Iranian road constructing companies are ready to carry out projects in Turkmenistan, and that Iran will soon be exporting buses to Turkmenistan.

According to Turkmenistan’s Ministry of Finance and Economy, 89 investment projects at a total cost of over $1.3 billion, funded by Iranian companies, were registered in the country as of February 1. A total of 142 enterprises using Iranian capital are said to be operating today in Turkmenistan, including limited liability companies, subsidiary companies, representative offices and branch offices.

Large-scale joint projects, including the Kazakhstan-Turkmenistan-Iran transnational railway, which have already been completed, are considered examples of effective bilateral collaboration.

Iranian Minister of Energy, Reza Ardakanian, who traveled to Turkmenistan as part of the Iranian delegation, said on Wednesday that a second power transmission line from Turkmenistan to Iran, which has been down for the past six months, will “come back on stream in the coming days.”

Ardakanian noted that a delegation from Turkmenistan will visit Iran next week to hold talks on the construction of a 500kW power line, which will be the third joint project of its kind.

For his part, President Berdimuhamedow said that Turkmenistan’s plentiful oil and gas reserves have positively contributed to the development of bilateral relations. He reaffirmed his government’s interest in developing closer cooperation with Iran in the energy sector.

Yet while Berdimuhamedow had kind words for Iran, not everything has been so pleasant in the recent past.

In December, the Turkmenistani government announced that it was planning to take Iran to the International Court of Arbitration over an energy deal that went sour after 20 years. The National Iranian Gas Company allegedly owes Turkmenistan about $2 billion.

As of January 1, 2017 Turkmenistan had shut off the gas spicket on Iran, and has not turned them back on ever since.