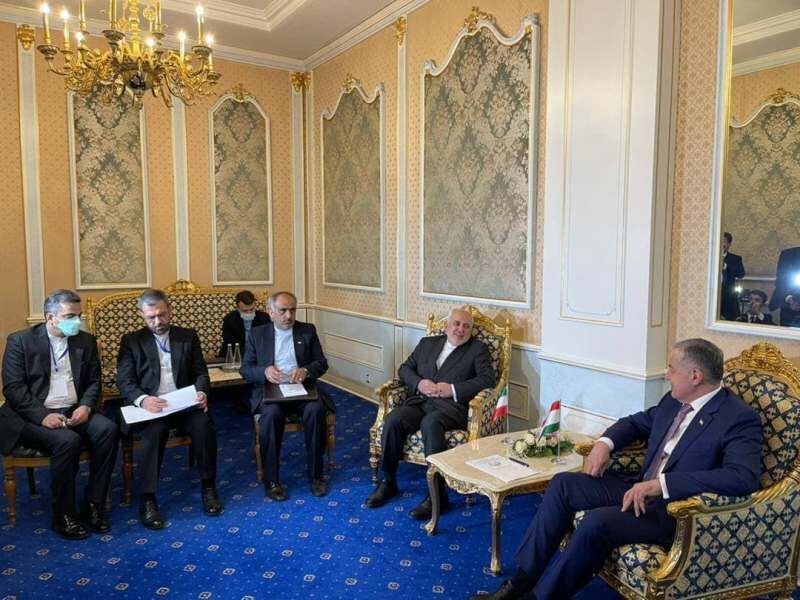 Iranian Foreign Minister Mohammad Javad Zarif and his Tajik counterpart Sirojiddin Muhriddin have discussed the ways to develop bilateral cooperation as part of a meeting held on the sidelines of the Heart of Asia — Istanbul Process conference in Tajikistan’s capital city of Dushanbe.

“During the meeting, the sides noted their interest in developing bilateral political, trade, economic and cultural relations,” reads a statement issued by the Tajik Foreign Ministry on March 30.

The Heart of Asia – Istanbul Process is an initiative of Afghanistan and Turkey, which was officially launched in Istanbul in 2011. Since its launch, the conference held eight meetings in Turkey, Afghanistan, Kyrgyzstan, China, Pakistan, India, and Azerbaijan. It is a platform for promoting regional security, economic and political cooperation centered on Afghanistan through dialogue and a set of Confidence Building Measures (CBMs).

Tuesday’s meeting also focused on issues related to the full implementation of the existing Memorandum of Understanding between the governments of Iran and Tajikistan on bilateral cooperation in the security sphere.

The two sides described the construction of the Istiqlol (“independence” in Tajik) Tunnel as a positive example of the cooperation between the two countries, and expressed the hope that the construction of the second phase of the tunnel will be completed by September this year. President Rahmon and Minister Zarif also agreed to cooperate in order to prevent terrorism, extremism, drug trafficking, and other transnational organized crime due to the “aggravation of geopolitical and geostrategic competition, the growth of threats and challenges to security and the situation in Afghanistan.”

Relations between Iran and Tajikistan have come under strain after officials in Tehran invited Muhiddin Kabiri, who chairs the opposition Islamic Renaissance Party (IRPT) banned in Tajikistan, to an international Islamic conference in December 2015. In 2014, Iran was Tajikistan’s third-largest trade partner with trade turnover amounting to about $200 million, but due to a relationship crisis, the figures dropped to $60-70 million in 2015.

In 2019, Iran’s President Hassan Rouhani paid a visit to Tajikistan, signaling thaw of relations between the two countries.

Companies from Iran constructed in 2019 the 220-megawatt (MW) Sangtuda-2 hydroelectric power plant in the Central Asian country. Iran has also embarked on a project to construct a hydroelectric power plant at Tajikistan’s Rogun Dam. In addition, the two countries agreed to invest $8 million into the construction of the Istiqlol Tunnel. The tunnel, which is also called the Anzob Tunnel, cuts the travel time between Dushanbe and Tajikistan’s second-largest city, Khujand.