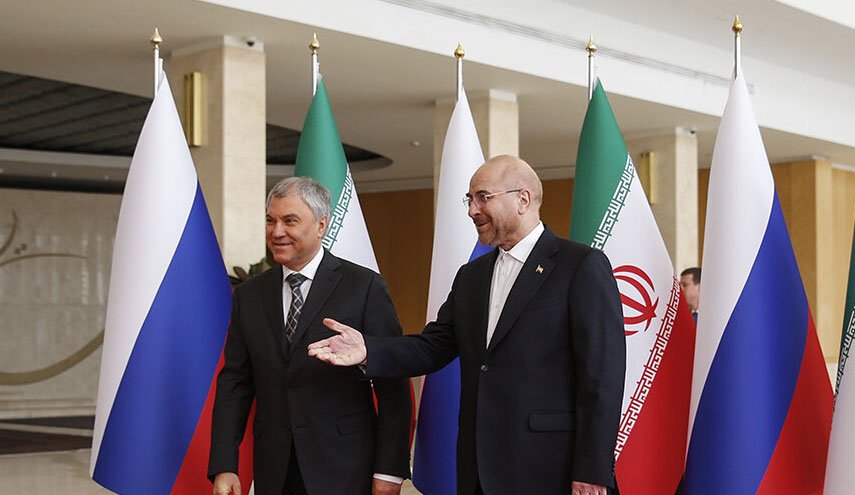 Iran’s Parliament Speaker Mohammad Baqer Qalibaf has stressed the need to speed up the initiation of a 25-year cooperation agreement with Russia.

“We should all turn our minds to the future and pay attention to the strategic agreement between Iran and Russia. We should put into action a 25-year agreement as soon as possible,” Qalibaf said at a meeting with visiting speaker of the Russian State Duma (lower parliament house) Vyacheslav Volodin, ISNA reported on January 23.

The Iranian Speaker called for maximum use of opportunities and said that ties between Russia and the Islamic Republic have increased in various fields due to significant developments globally and in the region over the past years.

He further said that the two sides also discussed the launch of a strategically important International North-South Transit Corridor (INSTC), which, according to him, is of special significance not only for Iran and Russia, but also for some Eurasian countries and Central Asia.

Also, during the meeting, the sides discussed the need for both countries to make joint investments in the Rasht-Astara railroad as a final part of the INSTC project.

For his turn, Volodin referred to a “positive advance” in relations between the two countries, underlining that the 25-year document would serve as a basis for the current and future cooperation.

The two speakers also discussed a wide range of issues, including investment in oil and gas industry and facilitating the swap of gas between the two countries.

The Russian parliamentary delegation headed by Volodin arrived in Tehran on an official visit on January 22, to promote economic and trade ties. The Russian official also took part in the third meeting of the inter-parliamentary cooperation commission.

On January 23, Volodin also met with Iranian President Ebrahim Raisi to discuss the development of bilateral relations. During the meeting, the speaker of the Russian State Duma noted that Moscow and Tehran stand for a just world order and call for ensuring global and regional security.

“Western dictatorship can only be opposed to the freedom of development of countries and peoples,” the Russian speaker said, adding “in this context, preserving sovereignty and independence is of paramount importance for the two countries.”

On January 19, Russian President Vladimir Putin discussed energy and transport cooperation, as well as the situation in Syria in a phone call with his Iranian counterpart. This is the second Putin-Raisi phone call since the start of the year. On January 11, the two leaders also discussed bilateral projects, and economic ties focusing on the same topics. Earlier in 2022, Putin and Raisi met on the margins of a summit of the Shanghai Cooperation Organization (SCO) in Samarkand. In July, Putin visited Tehran to attend an Astana-format trilateral meeting of the leaders of the Syrian settlement guarantor nations.

Relations between Tehran and Moscow have strengthened in recent years, particularly following Russia’s invasion of Ukraine in February 2022. Iran has repeatedly denied it has supplied drones to Moscow “to be used in Ukraine.” However, Iran’s Foreign Minister Hossein Amir-Abdollahian last November confirmed that Iran had provided Russia with “a limited number of drones months before the war in Ukraine.”

Meanwhile, Iran is reportedly acquiring 24 units of advanced Sukhoi Su-35 fighter jets from Russia to renovate its aging air force fleet. The jets could be a payment for Iranian drones used by Russia in its war against Ukraine, according to global media outlets.