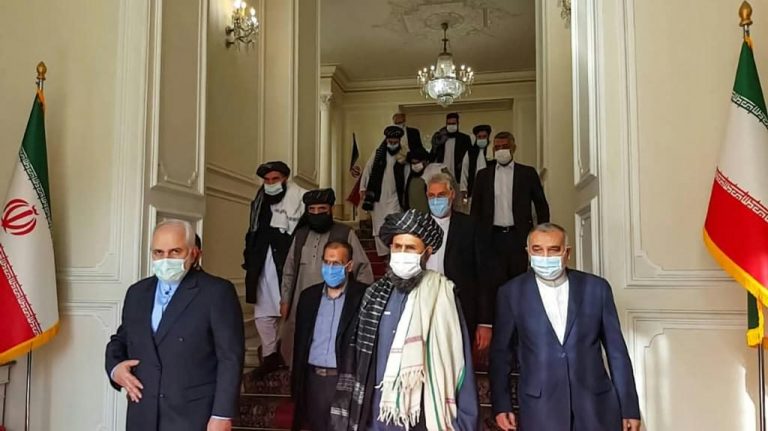 Iran’s President Ebrahim Raisi has expressed support for establishing an inclusive government in Afghanistan, following the takeover of this country by the Taliban militant group.

"In the current situation, everyone must help form an inclusive government with the participation of all Afghan groups and let the Afghan people decide their own destiny," Raisi said in a telephone conversation with his French counterpart, Emmanuel Macron, the Iranian president's official website reported on September 5.

Raisi also voiced Iran's readiness to "create peace and security and prevent fratricide in Afghanistan", as he referred to the "failure" of the US and NATO's "military intervention policy in Afghanistan".

On the same day, in a phone conversation with Iranian Foreign Minister Hossein Amir-Abdollahian, the head of Afghanistan’s High Council of National reconciliation Abdullah Abdullah called on Iran to send humanitarian aids to Afghanistan.

The Taliban group entered the Afghan capital, Kabul, on August 15, without any resistance, and established full control over the Afghan capital within several hours. Afghan President Ashraf Ghani left the country. The Taliban offensive began months ago and accelerated amid the withdrawal of US-led troops from Afghanistan that started on May 1. US President Joe Biden said on July 8 that the military mission in the country would conclude on August 31.

“20 years of US occupation brought Afghanistan nothing but death & destruction. It's now a historic opportunity for Afghan leaders to put an end to their people's plight by ending violence and forming an inclusive government. Iran stands with the brotherly nation of Afghanistan," Khatibzadeh said in a tweet on August 31.

"Spending huge costs, America turned the country's national army into an inefficient army that could resist this attacking group [the Taliban] for only 11 days, despite the fact that America has poured millions of dollars annually into that army," Baqeri said on August 29.

Iran and Afghanistan share a 570-mile border that includes several lucrative trade routes. Beyond their sectarian differences, both Shiite Iran and the Sunni Taliban share an antipathy toward the United States and the west in general. After the rise of the Islamic State terror group in Afghanistan in 2015, Iran reportedly increased cooperation with the Taliban in order to secure its border, much of which lies in areas under Taliban control.

Afghan and US officials have repeatedly accused Iran, specifically the Islamic Revolution Guards Corps, of providing financial and military support to Taliban forces in exchange for the disruption of infrastructure projects that would give Afghanistan greater control over the water supply to Iran. However, Tehran has repeatedly rejected allegations that it aids the group, describing such claims as being instigated by the United States in an attempt to divert public opinion from the real cause of violence in Afghanistan.

Meanwhile, Iran and Afghanistan have had a long dispute with Afghanistan over the Helmand River. Tehran has long objected to the construction of the Kamal Khal Dam over this river, arguing it would contribute to the drying up of its wetlands in the Sistan-Baluchestan border province. According to Iranian experts, Lake Hamun, located on the Afghan-Iranian border, as well as dozens of wetlands fed by the Helmand River waters may dry up as a result of water intake at the Kamal Khan Dam.

During his visit to Iran’s south-eastern province of Sistan-Baluchestan on September 3, President Raisi said that Iran would not back down on its demand of having its water share of the Helmand River on the border with Afghanistan, and added that the country needs "a proactive diplomacy in this regard to evoke this indisputable right”.