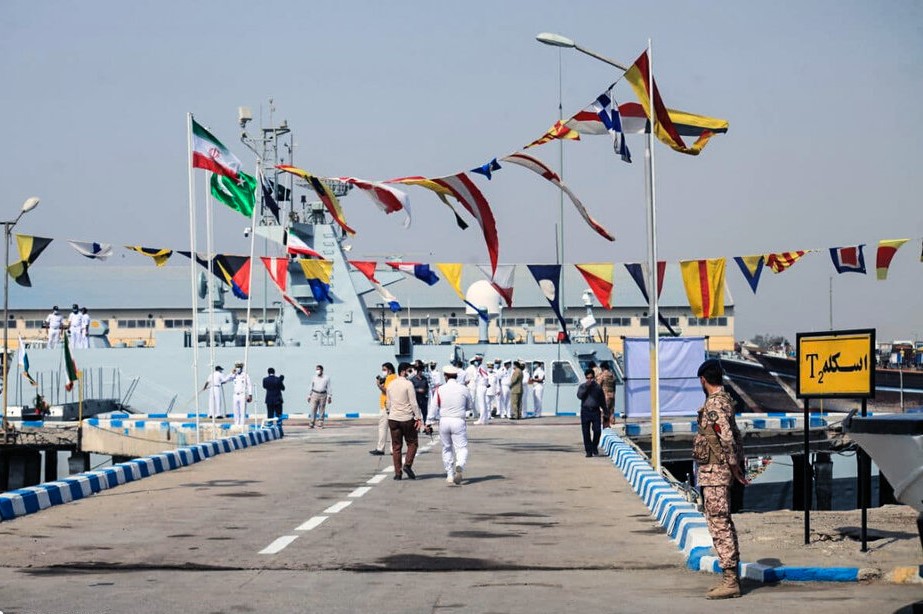 A Pakistani fleet consisting of two naval vessels docked at the port city of Bandar Abbas in Iran's southeastern province of Hormozgan on April 3, to further strengthen bilateral and friendly relations with Iran, and it will be present at Bandar Abbas till 6 April. / MEHR News Agency

A joint drill between Pakistani and Iranian naval forces is scheduled to resume soon after being halted last year due to the Covid-19 pandemic, the Commander of the 1st Naval Zone of the Iranian Army, Second Admiral Jafar Tazakkor, said on April 3, during a visit to southern Iran.

The annual drills fall under a memorandum of understanding signed between the two countries. Pakistan's intelligence-combat and operational flotilla - consisting of the Grand Missile Destroyer and the Support Submarine - has docked in the port city of Bandar Abbas in Hormozgan Province to “further strengthen bilateral and friendly relations with Iran,” according to Iranian Students’ News Agency.

Pakistan's Navy Flotilla will be present at Bandar Abbas from 3 to 6 April, and on the last day of its presence in Bandar Abbas, the fleet will be escorted to the east of Lark Island by the Iranian Navy.

The Iranian commander said that the purpose of this mission is to train the navies of the two countries and coordinate the security of shipping lines in the Oman Sea, and added that “a joint exercise with Pakistan will be held on the last day of the fleet's presence in the Persian Gulf, near Lark Island.”

The aim of the drill is to exchange educational and intelligence experiences, secure the region's maritime trade lines, maintain good neighborliness and expand bilateral relations.

For his turn, Pakistani Admiral Khan Mahmoud Asef, Commander of the Expeditionary Fleet, said that the exchange of experiences, strengthening the relations between the two countries' navies and conducting joint exercises are the main goals of the Navy's presence in Bandar Abbas.

Mahmoud Asef stated that the establishment of security in the Persian Gulf, which is the most important international highway in the world, is important for both Iran and Pakistan.

The representative of Iran’s Supreme Leader in Hormozgan, Mohammad Ebadizadeh, said during a meeting with the delegation of the Pakistan Navy that “hostile countries, such as the United States, seek to divide the countries of the region, and have a plan to portray the region as insecure."

“Joint exercises between the Pakistani and Iranian navies demonstrate the unity and strength of the two countries,” Ebadizadeh added.

In mid-February, the Iranian naval delegation attended the Aman-21 international exercise in Karachi as an observer. Pakistan’s Navy staged one of the largest naval exercises in the Arabian Sea along with the participation of navies of 45 countries including the three largest navies, namely the US, China and Russia, which joined the exercise this year.