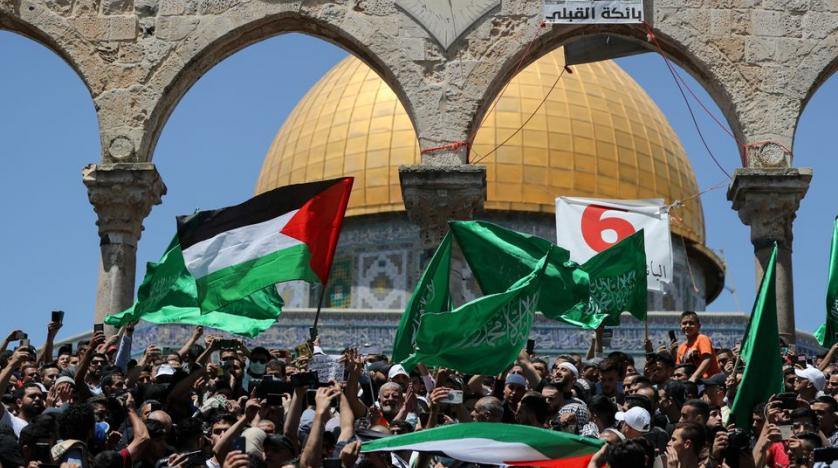 Palestinians gather after performing the last Friday of Ramadan to protest over the possible eviction of several Palestinian families from homes on land claimed by Jewish settlers in the Sheikh Jarrah neighborhood, in Jerusalem's Old City, May 7, 2021. / Reuters

Iranian top officials have expressed their support for the Palestinian people after hundreds of protesters were wounded in clashes with Israeli police outside Al-Aqsa Mosque in East Jerusalem.

“I deem it necessary to condemn the crimes committed by the usurper regime of Israel in desecrating the holy Al-Aqsa Mosque and killing the Palestinian people, especially children of this sacred land and territory,” Iran's Parliament Speaker Mohammad Bagher Ghalibaf said on May 11, in a meeting of the parliament’s open session.

He added that "the Zionist regime should be assured that the Islamic Ummah is standing firmly against this genocide and atrocities committed by the usurper regime in the occupied lands."

In a Tweet on May 10, Iran's Foreign Minister Mohammad Javad Zarif wrote that “it wasn't enough for the Israeli regime to steal people’s land and homes, create an apartheid regime, refuse to vaccinate civilians under illegal occupation. It had to shoot innocent worshipers inside Islam's 3rd Holiest Mosque upon Islam's Holiest Eid,” he added.

On May 8, Iran's Foreign Ministry spokesman Saeed Khatibzadeh condemned the attack on Al-Aqsa Mosque, saying that "this war crime once again proved the criminal nature of the illegitimate Zionist regime and the need to stop violations of international human rights."

Tension has been mounting in East Jerusalem since May 7, when 205 Palestinians were injured in clashes that erupted after Israeli forces stormed al-Aqsa mosque following the night prayers held there on the last Friday of the holy month of Ramadan.

The Hamas-run health ministry in Gaza says 24 people were killed in the clashes on May 10, including nine minors, while 103 others were said to have suffered injuries from the Israeli forces' strikes on the Strip.

Hamas Political Bureau Chief Ismail Haniya has called on the Islamic world to take a “firm stand” to support the residents of Jerusalem and “stop the crimes of the Israeli occupiers” in a letter sent to Iran’s Supreme Leader Ali Khamenei.

Hamas, a Palestinian militant organization that controls Gaza, is considered to be a terrorist organization by the United States, Israel and the European Union. The group won the 2006 Palestinian election and became the de facto governing authority of the Gaza Strip following the 2007 Battle of Gaza.

There has also been tension in the Sheikh Jarrah neighborhood in Jerusalem, where several Palestinian families are facing eviction orders. Palestinian residents of Sheikh Jarrah have been fighting against their eviction for over a decade, as several organizations have been seeking to settle Jews in the neighborhood. Jewish settlers sued Palestinian residents, claiming that in the 19th century Jews had purchased the land on which their homes were built.

In a live televised speech delivered on the occasion of Quds (Jerusalem) Day on May 7, Iranian Supreme Leader Ayatollah Ali Khamenei described the unity of Muslims as a "nightmare" for Israel and its American and European allies, adding that "the issue of Palestine continues to be the most important and existing common issue for the Islamic nation."

He also underlined the importance of the continuation of resistance and promotion of the "jihad and martyrdom" in the Palestinian territory with the support of Muslims of the world.

Iran marks Quds Day each year on the last Friday of the month of Ramadan, bringing millions of people onto the streets for rallies and speeches, showing support for the Palestinians and denouncing Israel. However, no rallies were held this year because of the Covid-19 pandemic.

Meanwhile, demonstrators gathered in various Iranian cities and formed vehicle processions to mark the annual Quds Day on May 7. The government had called off rallies and canceled vehicle processions in line with Covid-19 restrictions, but protesters flouted the rules in a "spontaneous move".

In recent years, Iran has reportedly lent assistance to Palestinian groups such as Hamas and Islamic Jihad, which have fought against Israel. In 2012 and 2014, Iranian Parliament Speaker Ali Larijani stated that Tehran has provided military support to some Palestinian groups.

Nathan Sales, a counterterrorism expert at the US State Department, said in November 2018 that Tehran funds Hamas and other Palestinian militant groups to the tune of $100 million a year.

Iranian Supreme Leader Ali Khamenei has also said that Israel will cease to exist in less than 25 years, and some Iranian officials including former President Mahmoud Ahmadinejad have vowed to "wipe Israel off the map".

Former US President Donald Trump recognized Jerusalem as Israel’s capital in December 2017 and relocated the US embassy from Tel Aviv to Jerusalem. The moves came amid Palestinian demands that the holy city should serve as the capital of their future state.