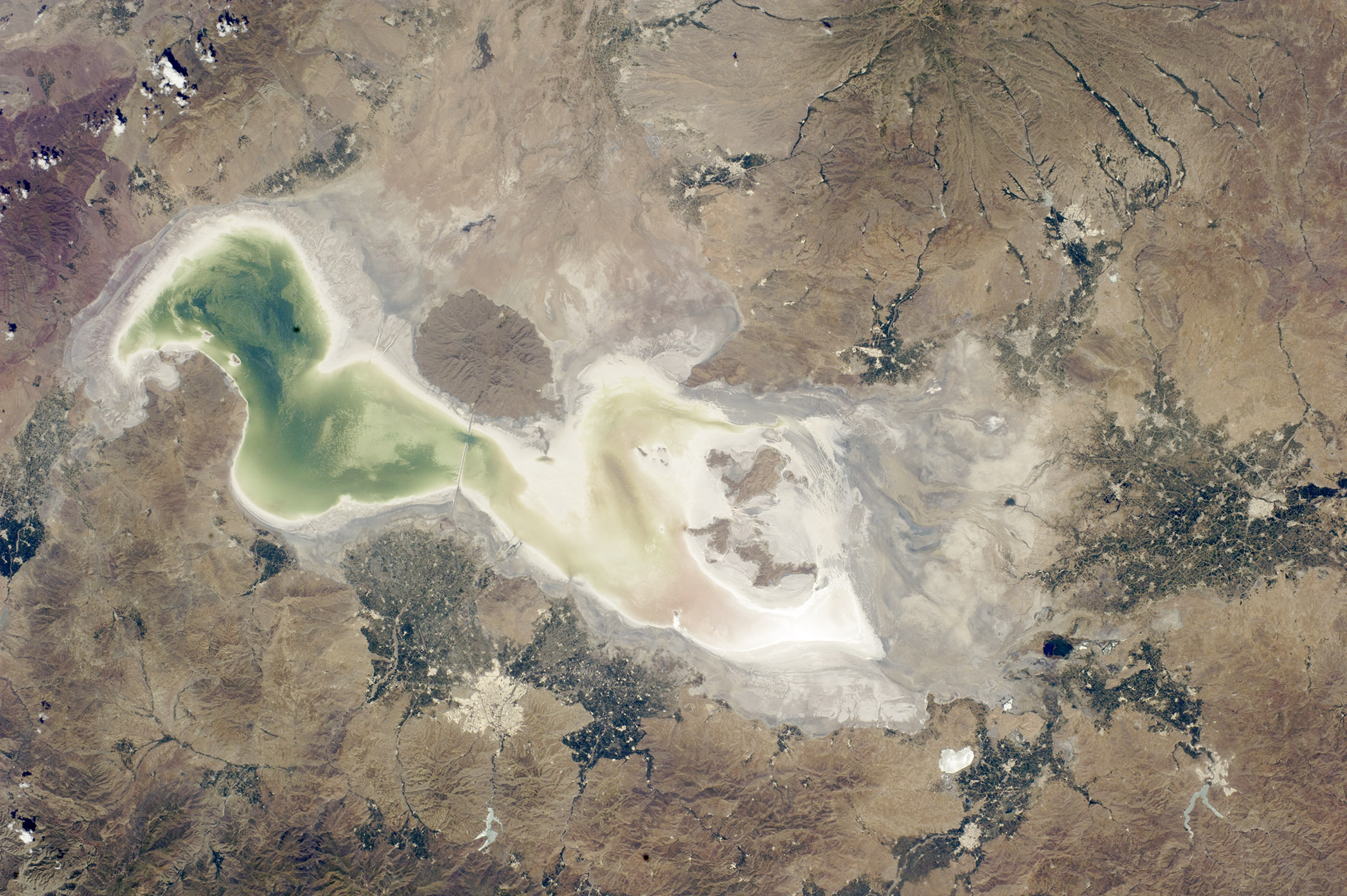 Lake Urmia shrunk by 248 square kilometers over the past year. On February 13, the lake covered 1,856 sq. km of waterbed, down from 2,104 sq. km on the same date of last year. Shrinkage has been largely attributed to the noticeable decline in precipitation in 2017, as the lake is a closed water body fed through 21 permanent and 39 seasonal rivers. / earthobservatory.nasa.gov

Iranian officials are calling on the government to save Lake Urmia, which has been facing serious drought for years.

“Urmia is an international wetland, reviving of the lake must be one of the main priorities of the government” Mohammad Esmail Saidi, a member of Iran’s parliament said according to Mikrofonnews Agency, adding that while the lake’s fate remains in peril, the government has not taken the issue seriously. He called on the Environment Agency to give guidance on how to best go about reviving the lake.

Located in Iran between provinces of East and West Azerbaijan, Lake Urmia has been facing serious drought for years due to climate change, the long dry spell, unrestrained damming and excessive water use, especially in the agriculture sector. Like the Aral Sea, a better-known vanishing salt lake in Central Asia, Lake Urmia is exposing a salt desert that generates noxious dust, threatening crops and people with a risk of serious diseases like respiratory problems or lung cancer.

According to the West Azerbaijan Regional Water Authority, the lake shrunk by 248 square kilometers over the past year. On February 13, the lake covered 1,856 sq. km of waterbed, down from 2,104 sq. km on the same date of last year. Shrinkage has been largely attributed to the noticeable decline in precipitation in 2017, as the lake is a closed water body fed through 21 permanent and 39 seasonal rivers.

“All government entities are required to fully practice the letters of the acts passed to revive Lake Urmia and the violators are held responsible,” Iranian First Vice-President Es’hagh Jahangiri said on January 30 while addressing the national committee to save Lake Urmia, according to Mehr News.

It has numerous ecological, economic and social implications in terms of biodiversity, climate, tourism and recreation. The principal salts contained in solution are sodium chloride, bromide and iodide, and sulphates of magnesia, soda and iron. The only organisms living in the lake are a species of artemia, a crustacean known from other brine lakes in Europe and North America, the larva of a species of dipterous insect, probably allied to ephydra, and green vegetable masses composed of bacterial zoogloeae covered with a species of diatom.

During his first presidential campaign, in 2013, President Hassan Rouhani called attention to the issue, promising that he would take the necessary steps to save the lake. His administration later launched the Urmia Lake Restoration Program.

In October 2017, over 100 Iranian parliamentarians submitted a letter asking Speaker Ali Larijani to summon Rouhani over the condition of Lake Urmia, and ask him why the plan for its revival has not been implemented.

“Authorities have started negotiations with foreign countries to absorb $3 billion to accelerate the lake’s revival,” the Governor General of West Azerbaijan province said, according to Financial Tribune. In January, Rouhani approved the use of foreign funds to assist with revitalizing the lake’s ecosystem.

Last month a social media campaign was launched to petition to the country’s Supreme Leader, Ayatollah Ali Khamenei, who has the final word on all matters of state, urging him to take up the issue. The petition, initiated on the app called Telegram, began on February 1 and claims that the lake’s volume is down by 90 percent of its original capacity. According to the campaign and postings on Telegram, the lives of 14 million people living in the region are at stake.

In September 2016, Iran and the Food and Agriculture Organization (FAO) of the UN launched a four-year sustainable management project for the lake. In February of this year, the FAO dedicated its special session to the Lake Urmia Restoration program, highlighting how social-ecological systems frameworks have been applied to complex problems related to sustainable agriculture and land use, especially under water scarcity conditions.

Experts have suggested the local population living near the lake reduce agricultural water consumption, diverting water from rivers to the lake, and using modern irrigation systems.