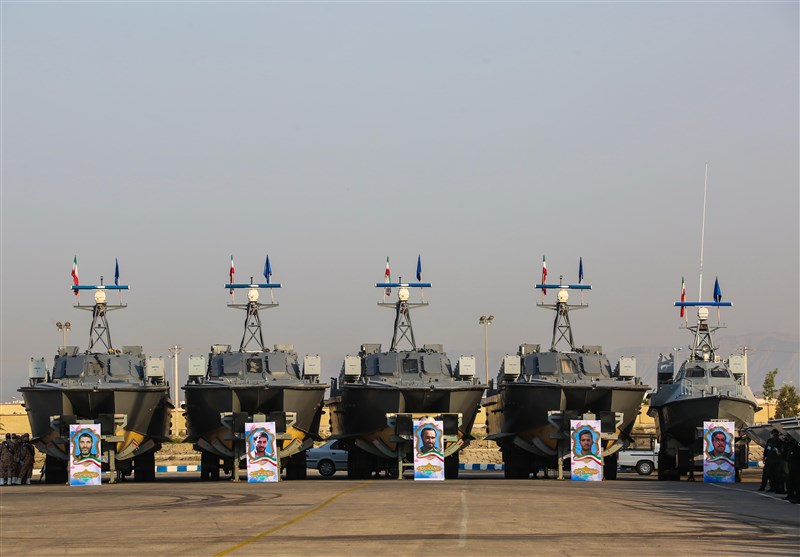 The Islamic Revolution Guards Corps' (IRGC) Navy took delivery of 112 missile boats in a ceremony in the southern Iranian port city of Bandar Abbas on May 28, 2020. / Tasnim News Agency

The naval forces of the Islamic Revolution Guards Corps (IRGC) in southern Iran have received 112 missile-launching speed boats this week.

“112 new-generation speed boats of different classes, joined the fleet defending the security of the Persian Gulf in a ceremony held in Bandar Abbas [Hormozgan Province],” Iran’s Tasnim news agency reported on May 28.

“We will not bow to enemies and will not retreat. The defense is our logic in war but not in the sense of passivity against the enemy," IRGC Commander Major-General Hossein Salami said during the ceremony in Bandar Abbas on Thursday. "Our operations and tactics are offensive and we have shown it in the battlefield."

The United States accuses the Iranian vessels of “harassing” the U.S. Navy vessels, describes the Iranian boats approaching the American vessels in the Persian Gulf and international waters in the region, as "dangerous and provocative".

"I have instructed the United States Navy to shoot down and destroy any and all Iranian gunboats if they harass our ships at sea," President Donald Trump said in a tweet posted on April 22.

On May 28, Iran’s Defense Minister Brigadier General Amir Hatami paid a visit to the industrial shops manufacturing two military vessels, a destroyer and a minesweeper in Bandar Abbas. During the visit, Hatami said the homegrown ‘Dena’ destroyer is a Mowj Class vessel that will be equipped with advanced systems and will soon join the Iranian Navy’s fleet. Mowj is a class of Iran's domestically produced light frigates, which are also known as destroyer escorts.

He stressed that the Defense Ministry will fully support the naval industries to enable them to protect the country’s territorial waters in the international waters, the Sea of Oman, and the coasts of Makran, a coastal region of Baluchistan in southeastern Iran and southwestern Pakistan.