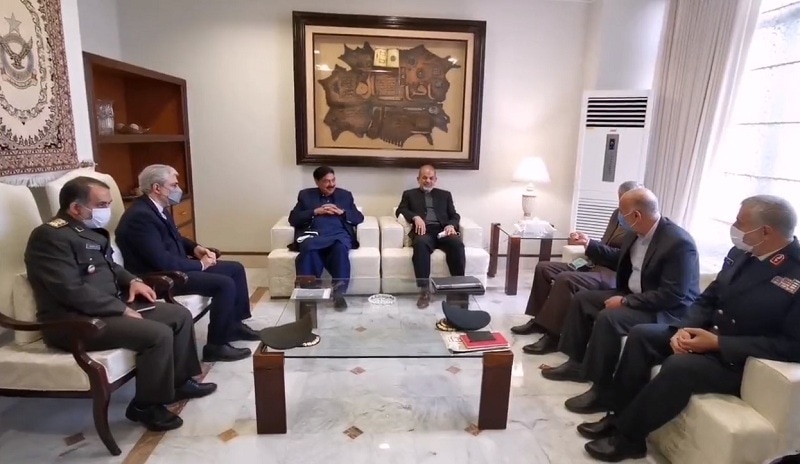 "Border security is important for both neighbors. Some want to create differences between the two friendly and brotherly countries of Iran and Pakistan. They are trying to manage terrorist acts, and their only aim is to sabotage bilateral relations," Vahidi told the Iranian state news agency IRNA on February 14.

The Interior Ministries of the two countries agreed to set up a working group that would study security issues of interest to both sides, including prisoner transfer, narcotics trafficking and people smuggling.

The two sides also exchanged views on completing fencing work on the joint border, and it was agreed that territories in Pakistan or Iran should not be used for terrorist activities.

During a meeting, the Pakistani prime minister highlighted the importance of close bilateral collaboration to boost trade and regional connectivity, and stressed the early completion and operationalization of border markets for the economic benefit of citizens on both sides of the Pakistan-Iran border.

Referring to economic relations, Vahidi said that the potential for bilateral cooperation was 10 times the current level of activity. “The necessary infrastructure should be put in place in order to realize this potential,” he added.

Pakistan and Iran share a border of about 750 km (466 miles) located in Pakistan’s southwest and Iran’s southeast. The Iranian south-eastern province of Sistan-Baluchestan, which borders Pakistan has reportedly been used as a transit route for drug traffickers. Pakistan's southwestern Balochistan province has also witnessed a growing number of attacks from militant groups in recent months.

In early February, nine Pakistani soldiers and 20 militants were killed in clashes and operations after a separatist group attacked two security posts in the province.

In addition, Jaish al-Adl, a Salafi jihadist militant group affiliated with al-Qaeda, is active in Sistan-Baluchestan. The group, which frequently attacks Iranian security forces, is backed by Baluch tribes that reside in the province and across the border in Pakistan.